Why does Erdoğan consider the UK a friend? 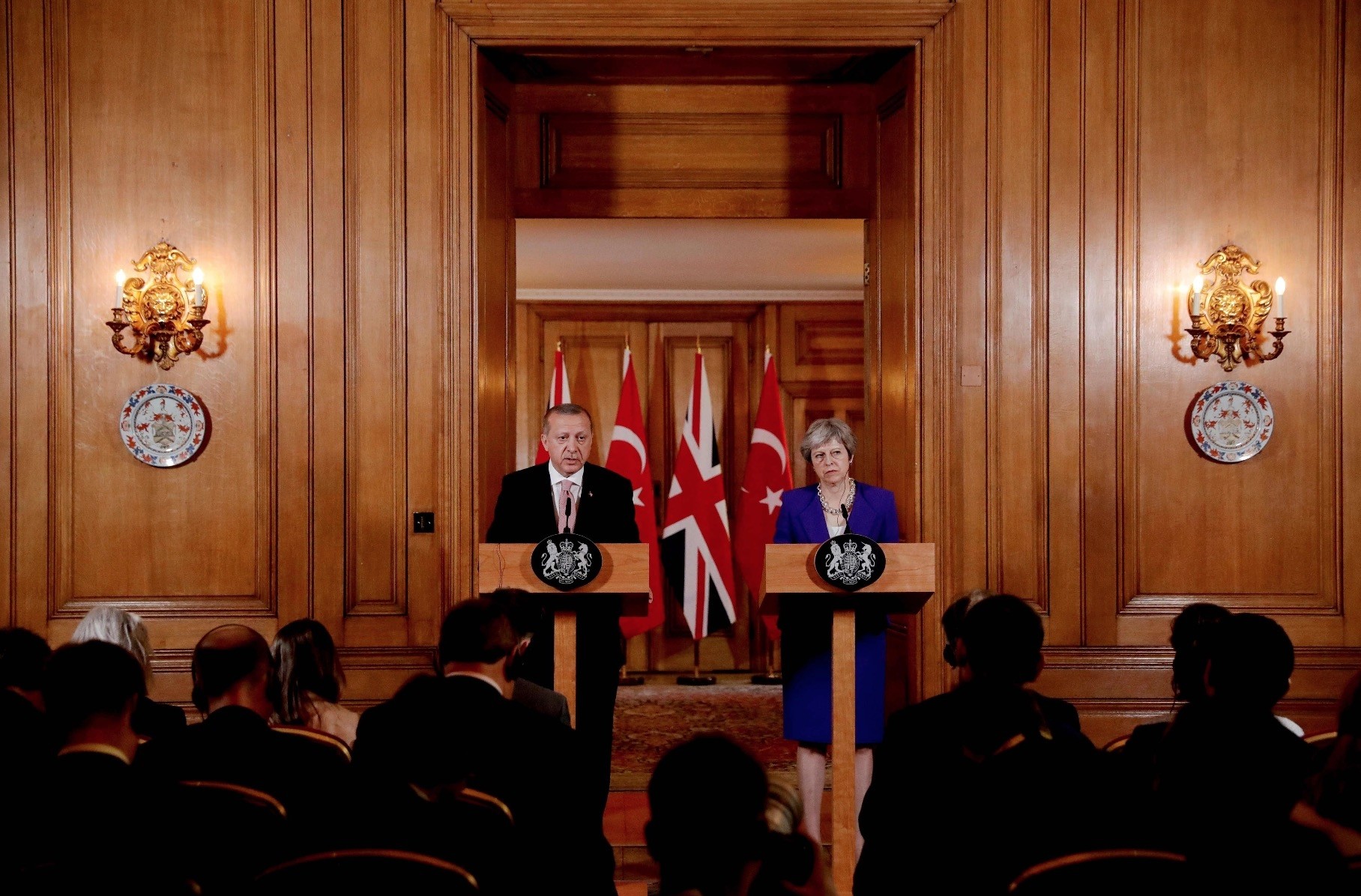 President Erdou011fan and British Prime Minister May attend a joint press conference following their meeting inside 10 Downing Street, London, May 15.
by Hilal Kaplan May 19, 2018 12:00 am

For Britain and Turkey, the countries on the two edges of Europe and the successors of two great empires, President Recep Tayyip Erdoğan's latest visit to the U.K. held historic significance.

In 2016, both countries experienced historic turning points. Two weeks after Britain decided to leave the EU as a result of a referendum, a group of military officers affiliated with the Gülenist Terror Group (FETÖ) attempted to stage a coup and killed 251 people with the army's jets and tanks. Following these turning points, the cooperation between Britain and Turkey has grown.During the latest visit, meetings aimed at heightening cooperation were held. The agendas of the meetings included crucial points such as signing a free trade agreement with Britain after Brexit and increasing partnerships in the defense industry, such as the TFX aircraft project. During a joint press conference held between Erdoğan and British Prime Minister Theresa May, Erdoğan said the two leaders agreed trade can be increased to $20 billion annually, up from the 2017 level of around $16 billion.

Delivering speeches at the Turken Foundation and Chatham House, where he addressed Muslim British citizens and senior British officials respectively, Erdoğan touched upon the same problems with his same determined stance, including the Jerusalem issue and Turkey's counterterrorism efforts. It was impressive that Erdoğan asked about the interest rates in Britain to those who are against the decrease of interest rates in Turkey during his speech at Chatham House. The rate is 0.5 percent, but no one in the room full of investors and economists seemed to know that. The interest rate, which is barely noticeable in England as it is regarded as null and void, is 18 percent in Turkey, and Erdoğan pointed out that this rate must be reduced since he considers this equivalent to usury. Then, he reiterated that Turkey is one of leading capital-friendly countries in the world that always welcomes investors.

During his Britain visit, Erdoğan remarked that he regards Britain not only as a strategic partner but also as a friend, which proves that Erdoğan is always open to be on amicable terms with Western states as long as they show understanding to Turkey's national security concerns. So, how did the relations reach this point? Britain was the first country to send a senior representative to Turkey in the aftermath of the attempted coup in 2016. Only a week after the attempt, Sir Alan Duncan, the British Minister of State for Europe and the Americas, paid a visit to Turkey. Also, May's second official visit abroad was to Ankara after Washington, whereas the U.K. Parliament Foreign Affairs Committee stated in a report that the Gülenists were behind the coup attempt. Moreover, Foreign Secretary Boris Johnson was the first Western minister to show support to Operation Olive Branch by acknowledging that it was an operation aiming to protect Turkey's borders. The trials of the British citizens joining the PKK's Syrian affiliate the People's Protection Units (YPG) and the arrest of the four "journalists" who provided financial support to the PKK terror group were also read as indications of Britain's good will and friendly behavior toward Turkey.

Therefore, Erdoğan's presidential visit to Britain, during which he also met Queen Elizabeth II and Prince Charles, was a successful one in this context. Through this lens, other Western friends might also infer useful messages from the visit.