An alliance of killers in the Middle East 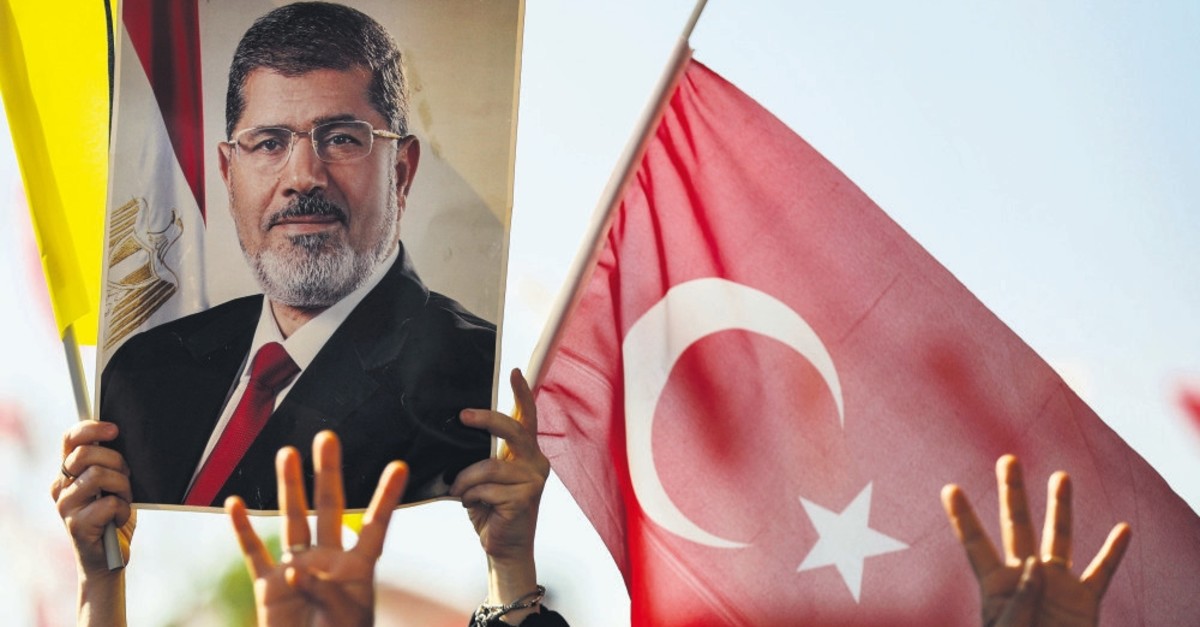 People make the Rabia sign, a hand gesture commonly used in Turkey and the Muslim world to symbolize unity, during the funeral prayer held in absentia for Mohammed Morsi, in the poster, at Fatih Mosque, Istanbul, June 18, 2019.
by Hilal Kaplan Jun 21, 2019 12:18 am

Egypt and Saudi Arabia and their murderous administrations are at the center of U.S. Middle East policy, which it has been pursuing with Israel. For them, the people aspiring to democracy are nothing more than the crowds that must be crushed

Mohammed Morsi, the first and only president to be elected through democratic elections in the history of Egypt, passed away in court while being tried by the very coup plotters who took him down from power.

With pruned authority, Morsi could serve for about only one year. Demonstrators demanding so-called democracy called on the army to take action against their first and last president who came to power through elections.

Following the coup, Egypt's constitution was suspended. Those who protested the coup were fired upon and thousands of people were killed. Abdel-Fattah el-Sissi came first in the ensuing elections in which no other candidate ran against him.

Those who led anti-Morsi demonstrations were either killed, or imprisoned or in forced exile under the military dictatorship established by el-Sissi. It should be remembered that it was the National Salvation Front, led by Mohamed ElBaradei, Amr Moussa and Hamdeen Sabahi, who applied to the Constitutional Court, i.e., the juristocracy in cooperation with the military, to abolish the Constituent Assembly in charge of establishing a constitution, despite all Morsi's calls for dialogue.

Bloggers like Gigi Ibrahim, or "liberals, libertarians, but most importantly seculars" such as the April 6 Youth Movement can be counted among those who called on the military to take action. They flocked to the streets and fought fiercely until the remnants of the old regime staged a coup. If the military was the first to do the worst evil to the Egyptian people, these figures and groups calling on the army to take action were the second. It is essential to condemn el-Sissi, but we should not forget those who paved the way for him.

Despite all this reckless savagery, there are still some who argue that Morsi was overthrown because he was anti-democratic. Remember even the then U.S. Secretary of State John Kerry could say in a statement after the coup, "The army is restoring democracy in Egypt." This is because the question was not whether Morsi was a democrat, but the fact that he did not act in line with the interests of the U.S. and Israel – its major ally in the Middle East.

Two days after Morsi's death, the U.N. report on the murder of Jamal Khashoggi was released. According to the report, there is a line of liability extending to Crown Prince Mohammed bin Salman in the Khashoggi murder committed by officials working on behalf of the Saudi royal family. The report on the murder of Khashoggi, who was suffocated with a plastic bag and cut into pieces with a saw, calls to impose international sanctions on Crown Prince Mohammed bin Salman and freeze his assets. However, as can be understood from U.S. Secretary of State Mike Pompeo blocking Saudi Arabia from the list of countries recruiting child soldiers despite the U.S. State Department's recommendations, Mohammed bin Salman is safe, despite condemning millions of people to hunger in Yemen and having a journalist cut into pieces at the consulate building merely because he is an opponent.

Egypt and Saudi Arabia and their killer administrations are at the center of the U.S. Middle East policy which it has been pursuing with Israel. For them, the people aspiring to democracy are no more than the crowds that must be crushed.