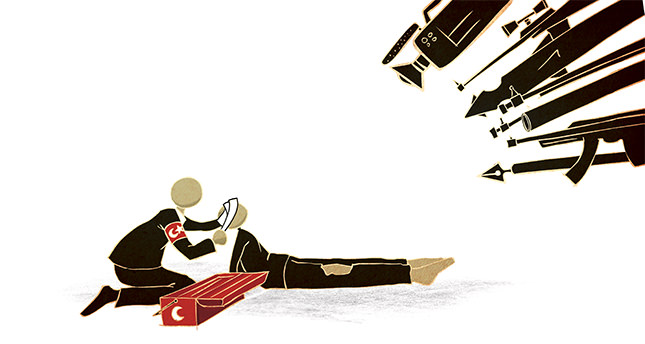 The terrorist attack in Ankara on Feb.17 claimed 28 lives and injured more than 60 people. Turkey is not new to this sort of terrorism as it has been fighting the PKK and similar terrorist organizations since the 1980s. But the Feb.17 attack is a first in several respects and will have far reaching consequences for the fight against the PKK as well as its Syrian affiliate Democratic Union Party (PYD) and its armed People's Protection Units (YPG). It will also affect Ankara's position regarding the Syrian war.

It is now established that the attack was carried out by YPG. The suicide bomber Salih Najjar entered Turkey in 2014 from the Hasakah-Qamishli region under the control of PYD. The attack follows weeks of heated debate among the top ranks of the Kurdish Communities Union (KCK), the umbrella organization that includes the PKK, as to whether the PKK should carry out suicide attacks in the big Turkish cities as retaliation to the security operations against the PKK in Cizre, Silopi, Sur and Nusaybin. One group calls for such attacks as PKK has lost close to 1,000 militants over the last two months. The other side opposes the idea on the grounds that such suicide attacks will make PKK look like DAESH and bring bad publicity. It looks like the first view has won the debate inside the PKK.

We should also note several public statements by PYD and YPG terrorists declaring war on Turkey in Amude, Syria, the hometown of the Ankara suicide bomber. In the video recorded on Feb. 10, a week before the attack, the group says: "As the people of Amude, from now on, we will defend the rights of our people, using every means available – the Asayish, YPG, YPJ [Women's Protection Units] and HPJ [Women's Defense Forces]." They express their support for the PKK inside Turkey and then say "With our people in Western and Northern Kurdistan, we will make [President Recep Tayyip] Erdoğan drown in his own blood".

On top of these statements, Cemil Bayık, a top KCK leader, said that the Ankara bombing "might be a retaliation" against the Turkish security operations on the PKK in Turkey and YPG positions near Azaz in Syria. While the Syrian Democratic Forces, whose main body is made up of YPG fighters, denied any responsibility in the attack, evidence shows that the YPG was behind it. They are probably trying to protect themselves from the terrible publicity this attack has given them already.

This is a game changer in Turkey's fight against terrorism in both Turkey and Syria. State authorities have already vowed that Turkey will be firm in its response and go after the terrorists whether they are in Turkey, Syria or the Qandil mountains in Northern Iraq.

In the meantime, YPG continues to manipulate the war in Syria to its advantage. In the name of fighting DAESH, it is acting as a client organization to the U.S., Russia and the regime of Syrian leader Bashar Assad regime at once. With air support from Russia and supplies from the U.S., the YPG is moving into areas controlled by moderate Syrian opposition groups – the very groups the U.S. also supporting. The Assad regime now openly says that it provides weapons and ammunition to YPG in the north of Syria so that it can control north of Aleppo for the regime.

Now given all this, Turkey has rightly reacted to the ongoing U.S. support to YPG. One can understand the Russian's motivation for supporting the YPG as it wants to use anything and anybody against Turkey after the downing of the Russian warplane on Nov. 24, 2015. But others raise questions among the Turkish public about the wisdom of this policy.

The anti-DAESH strategy is thus faced with a conundrum: While YPG attacks the other opposition groups fighting against DAESH, DAESH remains as powerful and operational as before and the Assad regime gets stronger by the day.

In the meantime, Russian jets continue to bomb Syrian towns and cities while Russia gives the appearance of doing diplomacy. Russians have violated every single cease-fire agreements since last December and continue their indiscriminate air campaign even after the Munich declaration. Over 2,000 civilians have died in Russian airstrikes so far.

This raises a fundamental question about the possible post-DAESH situation in Syria. Even if DAESH is defeated, which is unlikely with the current strategy of attacking DAESH and letting the Assad regime get away with its war crimes, the war in Syria will not end because the Assad regime backed by Russia and Iran will continue to fight against the Syrian people. This means more carnage, more war crimes and more refugees.

The colossal failure of the international community to protect the people of Syria over the last four years has led to the bloodiest war and the worst humanitarian crisis of the 21st century. Those who are supporting terrorist groups in the name of fighting DAESH are only contributing to an already worsening situation.