The Syrian civil war is making Turkey sick and tired 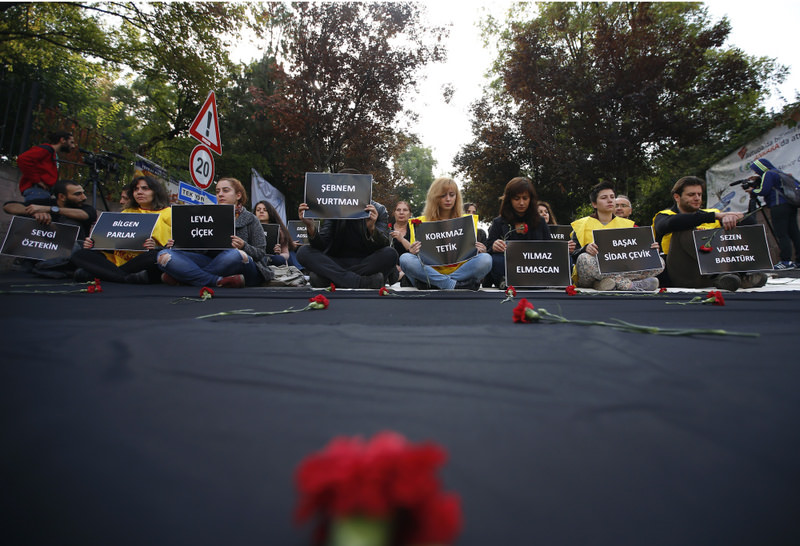 Ankara University students hold placards with the names of those killed in Saturday's deadly explosions during a sit-in protest in the Turkish capital.
by Merve Şebnem Oruç
Oct 14, 2015 12:00 am

ISIS seems to be trying to take its fight with the PKK into Turkey where the PKK is already fighting the Turkish state, which is one of the main supporters of the Syrian opposition and a member of the anti-ISIS coalition

It is really difficult to write after an incident in which many people have lost their lives. The reason gets lost, and the feelings of pain, anger and depression take its place. Even if you are right to feel this way, the feelings can pull you in the wrong ways, and you can lead your readers to lose their way as well with your words.

The Ankara suicide bomb attack, in which at least 97 people died and over 200 were injured, on Saturday is the deadliest attack in Turkey's modern history. The attack, which bears resemblances to both the Diyarbakır attack and Suruç suicide bombing in the last five months, occurred right in the heart of Turkey's capital, unlike the two earlier attacks. The Suruç suicide bombing in July was right before Ankara and Washington reached a deal to open Turkey's İncirlik Air Base in the anti-Islamic State of Iraq and al-Sham (ISIS) coalition airstrike campaign and the outlawed PKK resumed its terror attacks in Turkey right after breaking the cease-fire. According to surveys, the attack on the pro-Kurdish Peoples' Democratic Party (HDP) rally in Diyarbakır, which happened a day before the June 7 elections, took a toll on Kurdish votes for the Justice and Development Party (AK Party). Since a new government could not be formed, with coalition negotiations failing, Turkey is now going back to elections on Nov. 1. There is no doubt that such an attack will have an effect on voters. In the meantime, the attack came a day after news reports alleging that the PKK would announce a unilateral cease-fire until Nov. 1. Following the Ankara attack, the announcement came in hours.

ISIS has emerged as the main suspect behind the Ankara suicide bombing. ISIS, like other terrorist organizations, generally claims responsibility for its attacks to mobilize its supporters or to give a message. But no organization has yet claimed responsibility for either the last attack or the other two. If no group openly claims responsibility for this kind of act, it is highly likely that a subcontractor was used, and an instigator is involved. We do not know who is behind the attack for certain yet, but still we can be sure that the traces of the bloody attack go back to the spillover of violence in Syria. Since the beginning of the Syrian conflict in 2011, Turkey has been stuck in a very difficult position with its neighbor. Sharing a 900-kilometer border with Syria, Turkey first tried to persuade Syrian President Bashar Assad to bring reforms, and then it imposed economic sanctions targeting the leadership of the regime, but Assad continued to kill protestors whose only guilt was asking to live in a free country. Turkey had to shift its position after its fruitless efforts and become one of the countries in the Friends of Syria group, an organization founded in order to support the Syrian opposition. The group, organized by the United States, as U.S. President Barack Obama said, has not lived long. Turkey is now one of the very few remaining countries that is still trying to keep its promise given to Syrians, like Qatar and Saudi Arabia, and unlike the U.S. As part of its humanitarian policy, Ankara has also accepted around 2 million Syrian refugees who fled mostly from the Assad regime, a brave and noble move, which is not easy to carry out in many ways.

As a result of Western countries led by the U.S. changing their Syria policies again and again and not keeping their promises given to the Syrian opposition, Assad is still in power. But also, the notorious group ISIS found a chance to be born and grow in the regime's bloody swamp. The PKK's Syrian affiliate Democratic Union Party (PYD), which has received financial and military support from the U.S. in its fight against ISIS, is also one of the leading allies of the Assad regime. Meanwhile, intelligence reports have already shown that ISIS and the Syrian regime have a tacit agreement to fight their common enemy, the Syrian opposition. It is not absurd to think after the bomb attacks in Turkey that ISIS is trying to carry its fight with the PKK into Turkey where the PKK is already fighting the Turkish state, which is one of the main supporters of the Syrian opposition and a member of the anti-ISIS coalition. This of course will not only help ISIS spread its terror in the region or the PKK to gain more popularity in Turkey, but it also prolongs Assad's life. Since Moscow is now actively involved in the Syrian civil war to help the Assad regime survive and have started airstrikes on behalf of regime forces, Turkey's airspace has been violated by Russian warplanes a couple of times, indicating that Russia is trying to push Turkey to accept its solution offer favoring the Syrian regime. Accordingly, the purpose is to make Turkey use its influence on the Syrian opposition to accept this offer in the vacuum caused by the reluctance of Western countries to find a sustainable solution.

The Assad regime has poisoned everything in its country and it will export this toxic mix over its borders unless it is stopped. Turkey has started to suffer from its poison, after the people of Syria. Unfortunately, world superpowers are playing a dangerous game, seeing it and not acting responsibly. If Turkey becomes sick, neither Europe nor the rest of the world can stay healthy.
Last Update: Oct 14, 2015 2:40 pm