How has the ‘war on terror' gone so far? 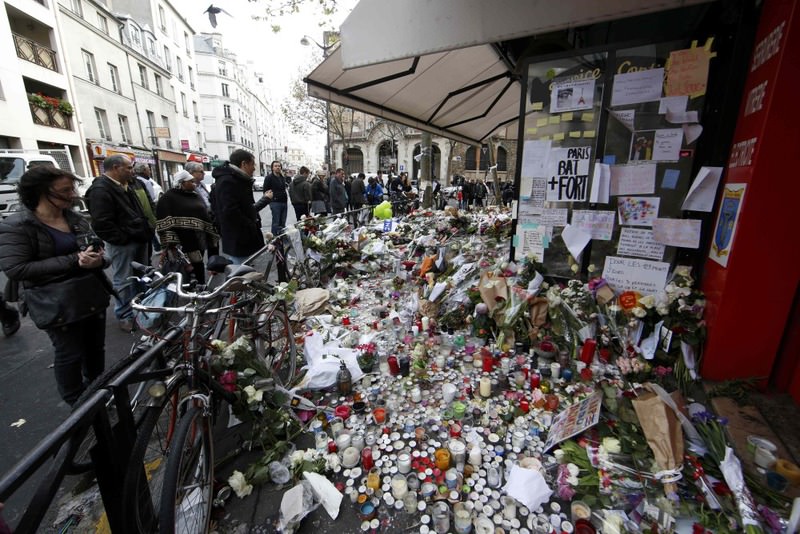 People looking at the flowers, candles and messages left in tribute to victims in front of La Belle Equipe cafe, one of the scenes of the deadly attacks in Paris.
by Merve Şebnem Oruç Nov 18, 2015 12:00 am

DAESH gradually continues spreading fear through terror not only in the Middle East but also in Europe. The West should no longer leave Turkey alone in the fight against DAESH, which is a global threat

In the aftermath of the Paris attacks on Friday, which killed 129 people and injured hundreds more, Western leaders vowed to step up anti-terror efforts once again.

Speaking at the G20 summit in Turkey, U.S. President Barack Obama said the U.S. would intensify its current campaign of airstrikes and called on nations to do more to combat the threat DAESH poses. German Chancellor Angela Merkel said: "We agreed that the challenge can't just be tackled with military means, but by a multitude of measures." British Prime Minister David Cameron said that the world leaders agreed to do more to share intelligence and cut off funding for terrorists, underlining the threat the world faces. Meanwhile, Russian President Vladimir Putin emphasized the need to cut off DAESH's ability to generate revenue through oil smuggling.But how is the war on DAESH terror going so far, really? Leaders keep talking about expanding cooperation between countries fighting DAESH and increase the airstrikes in Iraq and Syria, while DAESH has already started to attack outside of both countries. Last month's attacks in Ankara, the recent ones in Beirut and Paris, as well as the Russian airliner brought down by a bomb over Egypt's Sinai desert, are enough to show that terror is at a whole new level of horror and it has moved into a different geopolitical dimension.

Let's go back to the beginning. America's war on terror started right after a series of four coordinated terrorist attacks by al-Qaida on the United States on Sept. 11. Some might think that the U.S. made progress in bringing down the "central" al-Qaida over the years. Billions of dollars have been spent and thousands of civilians lost their lives. The 2003 invasion of Iraq and the way of "bringing democracy" to Iraq after Saddam Hussein fueled a new sectarian conflict leaving thousands of Iraqis jobless and humiliated. Maybe the core of al-Qaida was weakened, but al-Qaida-affiliated groups have risen. Al-Qaida in Iraq, Boko Haram, al-Shabaab and al-Qaida in Yemen have already shown that they are much more furious, unprecedented and unpredictable than their root organization. The rise of DAESH, surpassing the predecessor al-Qaida and others, revealed that the way the U.S. or others fight terrorism is wrong. The U.S.-led war on terror has helped terrorist organizations evolve and become a more dangerous monster than ever, instead of killing them.

The situation in Syria has become a mess, especially after the U.S. and other countries got partially involved in it. Military involvement against DAESH without taking action to heal the environment it was born in has only complicated the problem and helped DAESH to grow. To be honest, how can you get rid of the mosquito's without draining the swamp?

On the other hand, supporting military coups against freely elected governments just because they are Islamist and referring to killing thousands of anti-coup protesters as "restoring democracy" do not help the war on terror. On the contrary, it serves terrorist groups like DAESH and makes recruitment easy. Anti-Muslim rhetoric and politics also open the way to xenophobia in the West to blame the refugees for acts of terror in Europe, which is of course another way to help DAESH. Muslims are, indeed, the first and most frequent targets of DAESH terror. Making them civilian casualties of bombs in the Middle East and scapegoats in the west serves no one except DAESH.

The truth is that there is no shortcut to stop DAESH. Airstrikes against DAESH, like bombing its oil and gas facilities are the right steps, but the West needs a serious policy change. Reshaping the alliances in the region and stop pulling tricks on their allies, who have every right to worry about their national security and interests, are the first things to do for the West. Also, a powerful league of nations is an urgent need to isolate and weaken terrorism, considering that we forget when all five permanent members of the U.N. Security Council agreed on something that solves problems and ends well.

There is no quick cure for the cancer, but the world can first stop it from spreading and then beat it, if world leaders act responsibly.
Last Update: Nov 18, 2015 2:10 am
RELATED TOPICS