'Kneel or starve to death' strategy of Assad 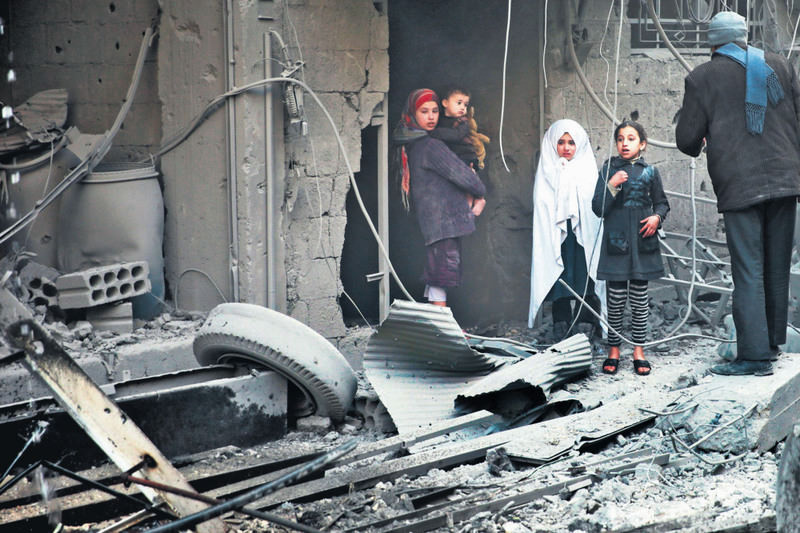 Children looking at the damage on a site possibly hit by Russian airstrikes in the town of Douma, eastern Ghouta in Damascus, Syria
by Merve Şebnem Oruç Jan 12, 2016 12:00 am

President Bashar Assad of Syria has been following the footsteps of his father since the start of the conflict in Syria, honoring the Syrian regime's long history of starving people

Food is one of the basic necessities of life and history has shown us it can ruthlessly be used as a weapon to exert pressure on or force people into submission in times of war or peace. The lack or absence of food weakens and damages the human body both physically and mentally and causes a slow and painful death while only the fear of starvation is enough to be used as a threat. There is simply no chance for the victims when this method is used. Almost all of a targeted population can be killed within a matter of months with no need to use any other instrument of war.

From China's Mao Zedong to the Soviet Union's Joseph Stalin, starvation has been used throughout history as a weapon against people to crush uprisings, control populations and kill people. In "Starvation as a Weapon," Simone Hutter argues that even famine in many cases is not the product of coincidence, but a side effect or result of a deliberate strategy focusing on starvation domestically, i.e., within a state's own national territory, giving examples from Yemen, Zimbabwe and Darfur. In a world where ammunition is expensive, starvation is a low-cost method of waging war, she says. Holding a population under siege for a couple of months and making people starve to death is cheaper, without doubt.

In the summer of 1976, for instance, during the first years of the Lebanese civil war, the U.N. Relief and Works Agency for Palestinian Refugees in the Near East (UNRWA) refugee camp in Tel al-Zaatar in northeast Beirut, housing some 50,000 Palestinian refugees, was besieged by Maronite militiamen who were backed by Lebanese army and then Syrian President Hafez Assad. The water and electricity to the camp were cut, the residents were deprived of food, medicine and other supplies, which quickly ran out and they began to starve to death one by one. According to the testimonies of the residents of the camp, women who were shot by snipers fell into the wells that others were forced to use while the women's' bodies remained. When the camp finally fell in several months, militia forces killed refugees in the camp with machine guns, grenades and knives. The number of Palestinian casualties was in the thousands.

President Bashar Assad of Syria has been following the footsteps of his father since the start of the conflict in Syria, honoring the Syrian regime's long history of starving people. Yarmouk, a suburb just south of Damascus and home to over 160,000 Palestinian refugees, was under government siege from 2012 to 2015. Human rights reports revealed that the regime had used starvation tactics on civilians. Serious malnutrition and severe illnesses had become routine in the camp, and when the Assad regime finally allowed the UNRWA to enter the camp to provide food and aid, the size of the crisis shocked the world. The torturer of Yarmouk has now been replaced with another monster after DAESH went in last year. From the threat of starvation to death in the hands of Assad to die at the hands of DAESH, Yarmouk is still helpless.

Just like Yarmouk and many other towns today, thousands of people are under the threat of dying from starvation in several besieged towns in Syria. There are about 176,000 people stuck in Eastern Ghouta, a rebel stronghold outside Damascus, while about 9,000 people are trapped in the Damascus suburb of Darayya and in the western town of Zabadani, according to reports. Madaya, another town located about 40 kilometers northwest of Damascus, has been under siege by Iran-backed Hezbollah forces, allies with Assad's government since July. Horrific images and stories of starving children, women and men in Madaya have recently flooded social media, surfacing that the blockaded town has been deliberately targeted to starve to death since 2015 without the world noticing. The number of deaths has been increasing every day in the town, aid workers say, while the only thing that the U.N. can do is to ask the Syrian regime to allow it access to the town to provide aid. The government finally agreed to allow the U.N. to enter on Monday morning, according to agencies, but no activities were reported until this article was penned. But even if it happens it will show that Assad's strategy of starvation to crush his own people is working as no one in this world can say stop to this ruthlessness. And we will just be happy to see some of the people under threat of death be saved, while the regime continues to do the same in other locations.
Last Update: Jan 12, 2016 7:18 pm
RELATED TOPICS