We need to talk about Aleppo 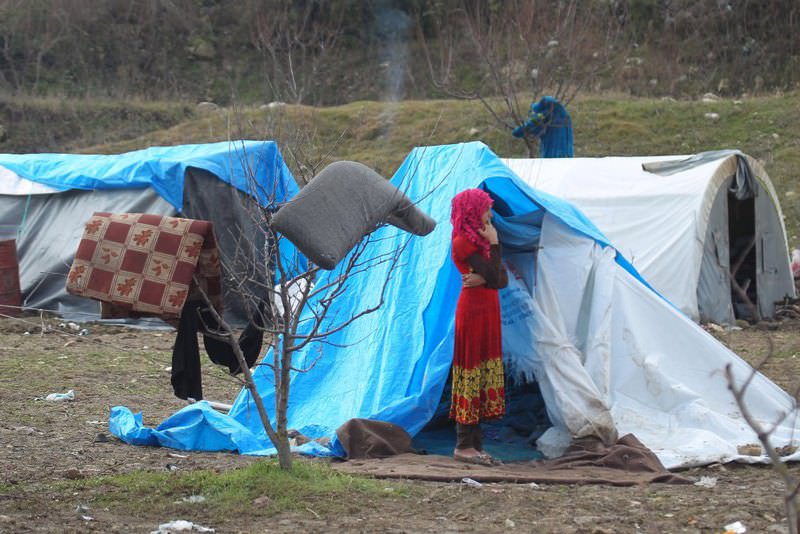 A girl standing outside tents housing internally displaced people in the town of Khirbet Al-Joz, in Latakia countryside, near the Syrian-Turkish border, Syria.
by Merve Şebnem Oruç Feb 11, 2016 12:00 am

It's high time the world said stop to the Syrian war causing hundreds of thousands of Syrians to wake up the next day as refugees, simply because of a tyrant's lust for his throne

My timeline on Twitter is like a never-ending nightmare. The numbers of civilians killed in several airstrikes in Syria are growing, while I sit in front of my computer to write a new piece. I want to write about something new, something different, but I can't. I can't turn my back on bombed schools, hospitals, starving people, hundreds of new refugees who fled Aleppo on the Turkish border, corpses under bombed-out houses, children who lost their parents, their limbs or their lives, destroyed cities, dying animals...

"Is this the modern world?" I ask myself. "Is this the information age we talked about?" We receive all kinds of SOS signals via our mobile phones with time, location and all the related data but do nothing to help. Is this the globalized world? Commercial goods and capital can circulate around the globe easier than ever before, while people - I am talking about the ones who escape from war zones for their lives - are not welcome in the so-called modern countries. Those are the countries that once said, "Everyone has the right to life, liberty and security of person" or "Everyone has the right to leave any country, including his own, and to return to his country." Europe, which holds human rights principles above all and trumpets them, has now fenced off its land borders and has enlisted neighboring countries like Turkey to be their gatekeepers. Their concern focuses on how to limit the number of refugees who gain entry to their countries, where they are seen as a burden or as an unnecessary expense.

Today, I can purchase almost everything I want without getting out of my sweet home, transfer money and take delivery at my front door. While money and merchandise can travel easily, millions of people have only two options: being trapped in war zones or getting out of there and staying alive but losing their dignity. The hypocrisy of the professionals and policymakers, who have astonishing careers, gives us a clue that something is really rotten in this system. It just stinks today, but tomorrow we will be faced with the sunken wreck. EU leaders fear that the refugee crisis will bring the end of the Schengen agreement. They are wrong, it's worse. The EU and the U.N. put pressure on Turkey, the country that hosts around 3 million refugees, to take more in but to not let them into Europe. If Europe continues like this and Turkey -- its natural buffer zone -- gets damaged, then it won't just be the EU that collapses -- it will be the whole system.

Still in public discussions of the Syrian refugee crisis, one question is rarely raised every day: Why are those people becoming refugees, why are those people escaping in the first place? It is rarely asked because the answer touches on the core of the subject, the essence of the problem. When someone dares to ask and pushes for the answer, the real face and the true thoughts of world leaders come close to being revealed. John Kerry, the U.S. secretary of state, recently was recently one of them. According to a Middle East Eye report, Kerry said, "Don't blame me -- go and blame your opposition" to some Syrian aid workers who accused him of doing nothing to protect civilians in Syria. He continued with no shame: "What do you want me to do? Go to war with Russia?"

After five years of show-off announcements declaring that Bashar Assad cannot stay in power, of factionalizing opposition groups classifying them as "bearded rebels who cannot be armed" and "secular-looking rebels who can be armed," of crossing the U.S.'s own shiny red lines on chemical attacks, of going inside Syria to fight DAESH, but not the one who is responsible for all and of not sharing the refugee burden of your allies, that is quite a question: "What do you want me to do?"

While the U.S. has kept talking, done nothing and stopped everyone else who has tried to do something without the U.S., hundreds of thousands of people have died, 7 million have been internally displaced, and 5 million have become refugees.

I would like to change the subject and talk about climate change or the economy, but I cannot. I have to write about Syria: We need to talk about Syria before it is too late. Aleppo, once Syria's biggest city and home to 2 million, is now under heavy bombardment from Russia who came to help the regime to survive and to kick hundreds of thousands of Syrians out of their homeland. If you think we have seen the worst, it was nothing compared to what is coming next. Turkey is already sick and tired of the Syrian war, and when you let Aleppo fall and trigger another en masse refugee flow, Turkey will not be the only country to be affected, Europe will follow and then the rest. And the whole system will come to an end. Then you can blame anyone you want or discuss why you failed.
RELATED TOPICS