Will Nobel Peace Prize-nominated town be abandoned to fate? 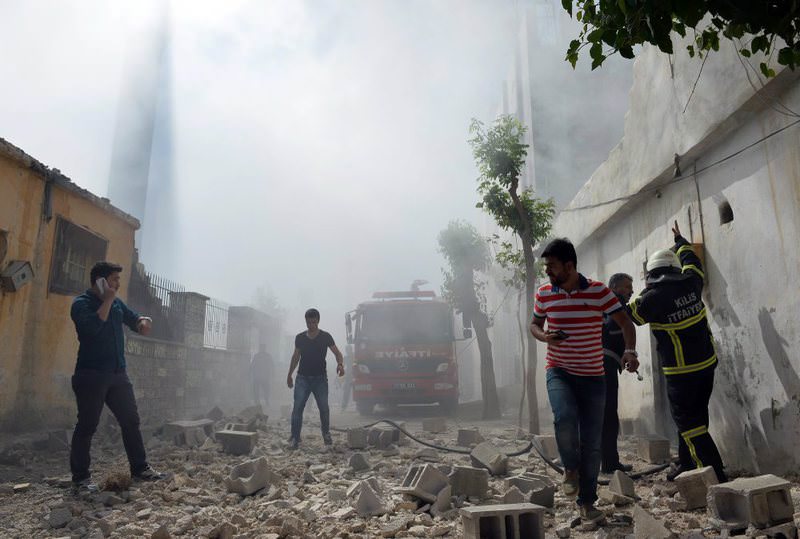 People in Kilis run shortly after a rocket projectile fire from Syria, which sparked a swift response from the Turkish military. (AP Photo)
by Merve Şebnem Oruç May 12, 2016 12:00 am

Rockets hitting border town Kilis paralyzed daily life, turning it into a ghost city. Kilis should not be abondoned to its fate!

The Turkish town of Kilis, located just 5 kilometers from the Syrian border, is having a terrible toll exacted upon it. The population of the town has more than doubled because of the arrival of refugees from Syria. The small town now has more refugees than its own local inhabitants.

In the meantime, the town is under rocket fire from Katyusha multiple-rocket launchers from the al-Bab district in Syria, which is currently under DAESH control. Since the beginning of this year, at least 75 rockets or mortar shells from Syria have hit Kilis, killing more than 20 people. Recently, the intensity of the rockets falling on the border town has increased, paralyzing daily life. Schools and shops are closed, Kilis has been hit almost every day, and inhabitants have been leaving their hometown due to the unpredictable attacks.

Under its rules of engagement, the Turkish military has been responding by shelling DAESH positions, but the efforts to counter the attacks are not enough. The problem with destroying Katyusha rocket-launchers is that they are easily transportable and put off very little heat, which prevents detection by firing systems. The Turkish military forces hitting DAESH targets using Fırtına howitzers with a 40-kilometer range only works in the short term, as the attackers leave their positions quickly and then return later.

A permanent solution does not seem to be possible without a ground offensive either by the Turkish military or the allied Syrian opposition forces. However, the allied opposition forces do not receive sufficient support compared to People's Protection Units (YPG) forces, which are strongly backed by the U.S. to fight DAESH, but they follow their own agenda. YPG forces do not only get support from the U.S., they also get support from Russia and the Syrian regime to fight against Syrian opposition forces. However, when presented with the facts on the ground, the only thing the U.S. tries to do is offer Band-Aids. Sure, the 90-kilometer range High Mobility Artillery Rocket System (HIMARS) batteries that the U.S. is said to be deploying on the Syrian-Turkish border in the upcoming months are also proportional to the span of the proposed safe zone, proposed to stretch for around 110 kilometers along the border from the town of Jarablous to Marea and about 70 kilometers deep, reaching the outskirts of Aleppo, Syria's second-largest city. But it does not mean that the U.S. completely understands the daily threats to Turkey from Syria, no matter if they are from DAESH, Bashar Assad's regime or the YPG. They are beyond ignorable or tolerable.

Last weekend, Turkey's Special Forces reportedly entered Syria and conducted a reconnaissance operation. Turkish officials have declined to comment on the operation, but even if the operation was just to gather intelligence to better locate and target DAESH positions, it shows that all options are on the table to bring the DAESH rocket strikes to an end, including a Turkish military ground operation with or without cooperation from Turkey's allies.

Turkey and the U.S. have been working together for a while to push DAESH away from border to block vital supply routes used by DAESH. The brutal group has responded to the joint operation by stepping up its attacks on Kilis. While fighting DAESH, Ankara is needed in almost all operations by the U.S.-led coalition. When it comes to confronting DAESH attacks, however, Turkey is left alone by its allies. The same goes for sharing intelligence regarding foreign fighters or DAESH cells outside Syria and Iraq and preventing the refugee influx to Europe. Turkey has been carrying more than its own weight for a long time, while the others laze about. It cannot continue like this.

Kilis, nominated this year for a Nobel Peace Prize for accepting so many Syrian refugees, cannot be abandoned to its fate, while it is deliberately attacked by DAESH. Are the U.S.-led allies looking for more shame to put on the list of mistakes in Syria or should Turkey change the name of the town from Kilis to Kobani?
RELATED TOPICS