Erdoğan vs the unjust world order 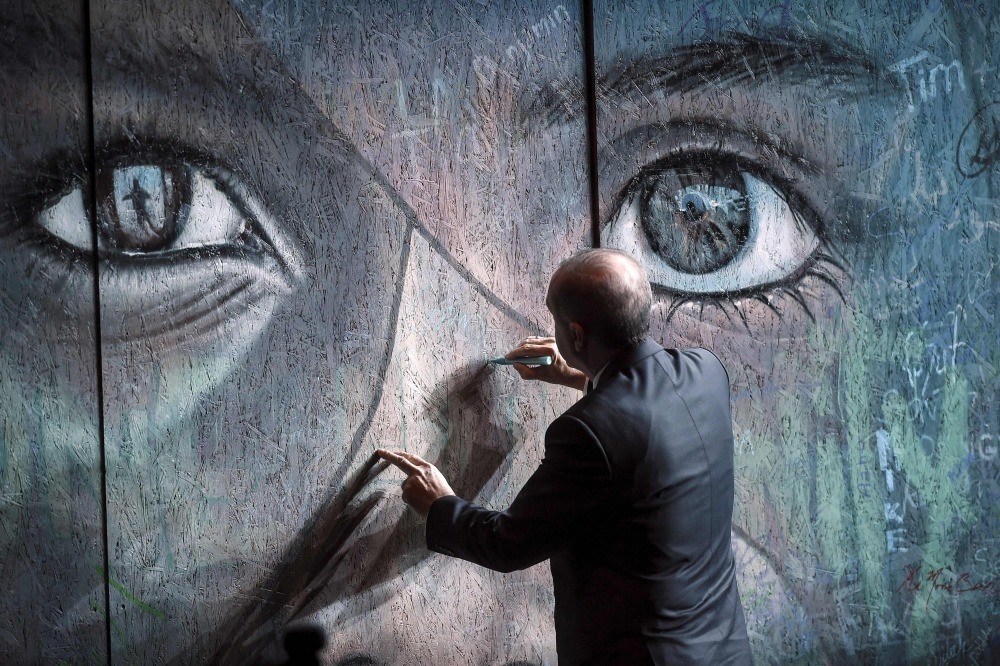 President Erdou011fan signing a graffiti wall at the closing of the World Humanitarian Summit in Istanbul.
by Merve Şebnem Oruç May 26, 2016 12:00 am

Erdoğan is a leader who never tires of saying that there is a need to revise the current world order, which has failed to help suffering people

The U.N. has described today's global situation as "the greatest humanitarian crisis of our lifetime." According to statistics, the world is facing the highest level of human suffering since World War II. More than 125 million people around the world are in need of humanitarian help and protection. However, the global system, which was supposed to prevent crises but has never been humanitarian enough, is totally breaking down.

World leaders and politicians met at the World Humanitarian Summit for the first time in the history of the United Nations on May 23-24. It was disappointing that none of the leaders of G7 states, except Chancellor Angela Merkel of Germany, and none of the leaders of the permanent members of the United Nations Security Council (UNSC), attended the summit. The lack of representatives from the world's most powerful states was criticized by many, including U.N. Secretary General Ban Ki-moon, and we saw some circles' attempts to discredit the summit, saying that it was just a photo-opportunity that would achieve nothing. Seriously, if the world's most powerful leaders refuse to attend such initiatives, how will the world restructure its response to humanitarian crises?

It was symbolic that Istanbul, the largest city in Turkey, was chosen to host the first-ever humanitarian summit. Turkey hosts over 3 million Syrian and Iraqi refugees who have fled neighboring countries in great despair while Ankara's foreign policy has been based on humanitarian principles for more than 10 years. According to the Global Humanitarian Assistant Report, Turkey is the third-largest aid donor after the U.S. and the UK, but in terms of gross domestic product (GDP), it is the most generous donor country in the world. Hinting that Turkey's tireless efforts will not end, President Recep Tayyip Erdoğan stressed in his statements during the summit that the country would never close its doors to people in need or to humanity regardless of their identities.

While Turkey has been increasing its humanitarian efforts and assistance, it has been passing through a really hard period in recent years. Erdoğan, who was seen as the leader of the model country for Muslim states in the Middle East, suddenly became a dictator in the eyes of the international mainstream media, surprisingly, in 2013, when Washington decided to change its Middle East policy, specifically toward war-torn Syria. Ankara has faced huge pressure from its Western allies, as it did not turn its back on people in need in its neighboring country for the sake of the world order and balance. The pressure, which has come along with propaganda, has turned into challenges at some points. While Western powers have behaved as if they have a right to interfere in Turkey's internal affairs, they have threatened Turkey in many ways, including groundless allegations and false claims. One of them was really unjust, offensive and absurd - that Turkey supports DAESH, the notorious terrorist group that has carried out terrorist attacks in Turkey and on the Turkish-Syrian border. Meanwhile, the West, especially the EU, has almost provided a safe haven for the PKK, another listed terrorist organization, which has escalated its violence and bloody terrorist attacks in Turkey in the last year. And let's not forget the West's support for the Gülenist Terror Organization (FETÖ) under the leadership of self-exiled Fethullah Gülen, who lives in the U.S. Gülenists are still one of the biggest threats to Turkey, as they tried to overthrow the elected government and then Erdoğan while he was prime minister in 2013-14.

A great majority of Turkish people believe that Turkey as a country and Erdoğan as its president have become targets because of his criticism of the unjust world order. Erdoğan is a leader who never tires of saying that there is a need to revise the current world order, which has failed to help suffering people. He says the structure of the world order is the reason for its failure. Erdoğan reiterated his most famous words: "The world is bigger than five," during the World Humanitarian Summit, slamming the veto power of the five permanent members of the UNSC.

I, too, agree with Turkish citizens that world powers have tried to take Erdoğan down since he has openly and directly challenged the unjust and unbalanced global order. While hosting the World Humanitarian Summit, Erdoğan approved Turkey's new government, which will push through constitutional reforms to transform the country's parliamentary system into a presidential regime that will set the president free from foreign pressures and internal bureaucratic challenges. As they say, what does not kill you makes you stronger; Erdoğan, who could not be taken down, is getting stronger. We will see how it reflects on his fight against the unfair world order.
Last Update: May 26, 2016 2:01 am
RELATED TOPICS