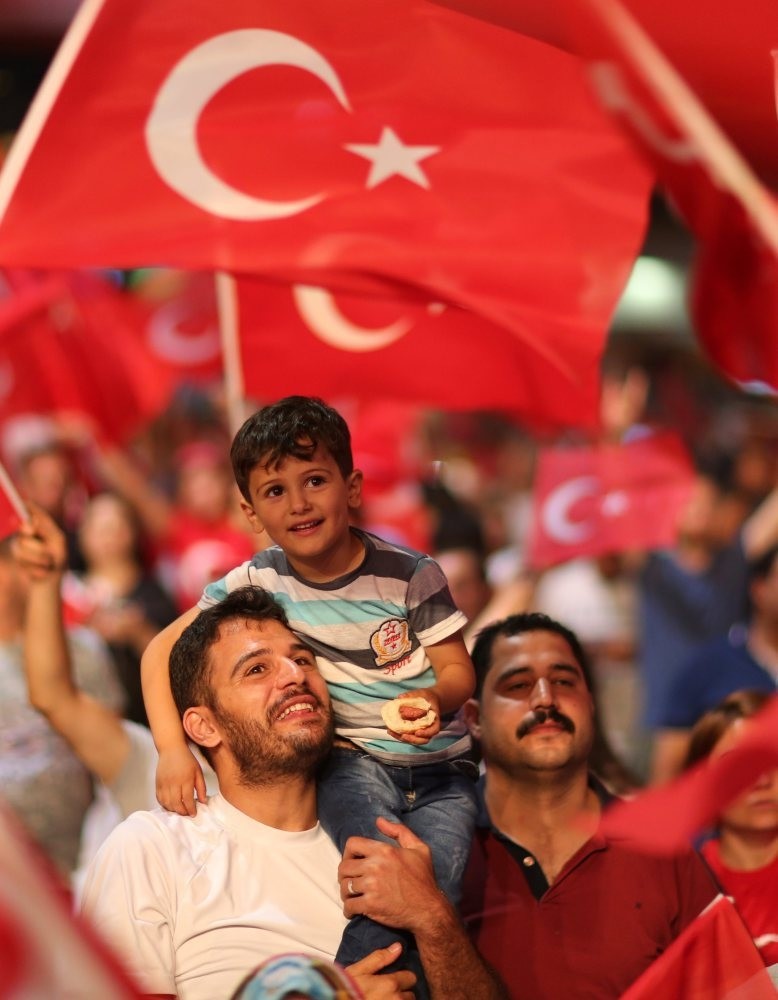 People shouting slogans against the failed coup attempt as they hold Turkish flags during a demonstration at Taksim Square in Istanbul, July 22.
by Merve Şebnem Oruç Jul 28, 2016 12:00 am

On July 18, the organization was alarmed; not for the bloody coup attempt, which resulted in the deaths of more than 200 people in a few hours, but for the subsequent detentions. As if it was possible to plot and stage such a horrible coup attempt with only 10 to 100 people, Amnesty International was implying that the detained coup plotters were too many and the government didn't respect human rights and the rule of law. After the terrifying night in which Turkish people risked and sacrificed their lives to stop coup plotters, some in the public furiously demanded the death penalty as punishment for those found responsible for the failed coup, which can be expected. In order to calm down society, several government officials said that the state would evaluate every option when the time comes. However, Amnesty International has presented this issue as if the government itself was suggesting the death penalty, which was not true.

Then on July 20, the organization was worried about freedom of expression. Most of the media houses, TV channels and prominent journalists in Turkey including the majority of those critical of the Justice and Development Party (AK Party) government were against the coup attempt and they have been showing their anti-coup stance since the night of July 15. Also none of the opponent media groups have been examined, except the ones that have close ties with the Gülenist Terror Organization (FETÖ). Unfortunately, Amnesty International preferred to portray Turkey as a country where government opponents in the media have been censored. In reality, it is not the government opponents that are being censored, only the coup supporters, who are being investigated, which is quite different from each other for Turkish people.

The organization, again on July 21, released a statement following the announcement of the imposition of a three-month state of emergency in Turkey alleging that the decision might pave the way for a rollback in human rights and freedoms. If the state of emergency will be used as a pretext to impose arbitrary restrictions on freedoms and rights - and I must say that no such thing happened up to today - the Turkish people will be the first to oppose it. Such a biased statement makes the Turkish community ask why Amnesty International focuses on an inessential subject now. After such a bloody attempt following terror attacks by DAESH and the PKK last year, Turkey needs security more than anything else, so what's the problem with it, the people do not understand.

Then on July 24, Amnesty International claimed that it gathered credible evidence that detainees in Turkey were subjected to beatings and torture, even rape. Actually I couldn't find credible evidence for those allegations other than no-name interviewee statements in the report. When I asked a government official, the answer was that independent monitors are always welcome for observation in refusing torture claims. So I wonder why the organization didn't even bother to get in contact with the government before releasing a torture report, which was obviously prepared in a mad rush and based only on the statements of the Gülenist coup plotters' relatives and lawyers. In the media, there are several images and videos of some Gülenists, including high-rank coup plotters, showing that they were injured but it is clear that their bruises and non-fatal wounds were not because of torture. Unfortunately, there were clashes between the Gülenist coup plotters and anti-coup protesters, and police officers that night. I am not sure if there is another way to stop a violent coup attempt without fighting them, unless Amnesty International thinks it would have been more humane for the Turkish people to surrender.

It's not finished. The last statement by Amnesty International following the failed coup attempt was released on July 25, after arrest warrants for 42 Gülenists who worked in journalism. Again, not paying attention to the fact that the arrest warrants are for the well-known Gülenists not government critics, the so-called human rights organization didn't surprise us. And it looks like it will not for a while and will continue to release panic reports, as it is understood from their reaction up to now.

We haven't seen any merciful reactions from Amnesty International for the Turkish civilians who lost their lives or were severely wounded by the Gülenist coup plotters. They were killed by gunshots, ran over by tanks, and bombed by F16 jets. It is disappointing to see that their lives mean nothing for a so-called human rights organization. And it is clear that an undemocratic coup attempt is not worth criticizing for the sake of human rights and freedoms.

An organization may find a blind spot in people's conscience to justify a bloody coup or a violent coup attempt. And maybe some can accept its bias under the pretext of freedom of speech. But still it shouldn't define itself as a human rights organization as the only group of human lives that matter for Amnesty International are the coup plotters' in Turkey, not the victims of them. For what purpose? it is pure hypocrisy.
RELATED TOPICS