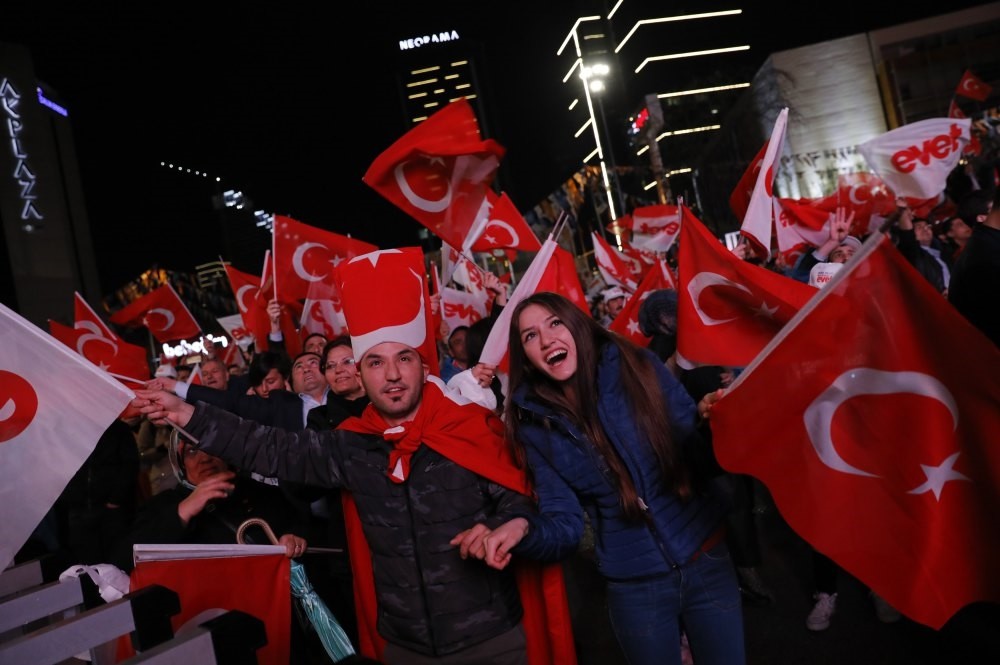 Supporters of the 'yes' camp celebrate as the results of the constitutional referendum are announced in Ankara, April 16.
by Merve Şebnem Oruç Apr 17, 2017 12:00 am

President Erdoğan is not immortal, and his term will end one day, but this great change is his legacy, it will live forever

Since the Gezi Park events began at the end of May 2013, almost all the stories penned about Turkish politics on Western mainstream media include the same cliché: President Recep Tayyip Erdoğan has somehow become authoritarian. The Gezi Park protests looked at first as if it was a widely supported environmental protest against urban development in Turkey but it quickly changed into something else, a copycat version of demonstrations on Arab streets. When the Turks saw that the environmental slogans were fake and the main idea was to overthrow Erdoğan, the majority chose to stand side by side with him. The anti-Erdoğan camp had failed.

Unlike real dictators who killed their own people in their own neighborhoods or the Western leaders that have been terrified with the fear of refugees, Erdoğan opened the doors of Turkey to three millions of people who had to flee their war-torn countries seeking a safe haven. He has warned the world many times to avoid spreading conflicts and hatred and to be careful for the sake of global peace and stability. And yet, he has been accused of his humanitarian diplomacy. It's sad but true that we saw many false reports in the past, full of accusations as if Turkey helped Daesh just because Turkey had different opinions about how to approach Syria problem. In time, the situation in Syria got worse. Turkey had to intervene, and started a cross-border operation to cleanse the Daesh terrorist elements from its border.

Only the CIA apologized to Turkey over the false claims on allegedly revealing Turkey's oil trade with Daesh, but the rest just pretended as if they did nothing, but they once again had failed.Erdoğan has been the first Turkish leader who initiated peace talks in 2013 to end the 30-year-old Turkish-Kurdish conflict, despite public reluctance. However, the West was quick to denounce him as 'the enemy of the Kurds' when the outlawed PKK refused to lay down arms. The PKK ended the cease-fire and waged a new war against Turkey, relying on the support given to its Syrian offshoot, the Democratic Union Party (PYD), by the Western countries. The peace talks were a game-changer for the entire Middle East, it was a gain for not only Kurds and Turks, but some others thought it would be their loss; the PKK was one of them.

The terror organization chose to leave the peace talks and they lost the war they started.

Within that period, the Gülenist Terror Group (FETÖ) started to target Erdoğan. Following Erdoğan's announcement of his intention to close down Gülenist private schools in late 2013, Fetullah Gülen tried to bring down the Justice and Development Party (AK Party) government by using his network hidden in the state apparatus and staged a government corruption scandal based on doctored wiretapping that were procured illegally under the guise of totally different investigations.

The government reacted to the Gülenist attempt in order to protect the state with large-scale reforms in the police and judiciary forces, and expelled the Gülenists from their positions. During the operations against the Gülenist terrorists, it was revealed that they had formed a parallel state inside the Turkish state. Since then, the Gülenists have become a primary threat for Turkey after the findings. While the Gülenists turned their fight into a large-scale war against Erdoğan and declared all the elections in Turkey as a 'referendum for Erdoğan,' Erdoğan vowed to find and cleanse all the Gülenists elements nested inside the state during his campaigns.

All along, the Turkish people were on Erdoğan's side and he was the winner of local elections and the presidential elections in 2014. The Gülenists did not give up after the AK Party won the general elections in 2015. According to the evidence, Gülenists started to plan a military coup after the November 2015 elections in order to literally hunt down Erdoğan. On the night of July 15, 2016, they actually attempted to do it. Through a video-call on TV, Erdoğan asked the people to pour into the streets and resist. The Turks responded en masse, and after decades full of coups, the people stood up and resisted against tanks, and prevented the coup from being successful. The Gülenist militants had failed again.

Erdoğan had won but it was not only his victory. The Turkish people, already knowing what was going on in their country, did not buy the Gülenist-led black propaganda against Erdoğan.

Turkey has become one of the top 20 economies of the world during Erdoğan's leadership; the middle-class has expanded, and the military domination in the country has been weakened. Turkey has become more democratic, developed and self-confident compared to the era before Erdoğan, while urban development projects have brought quality to daily life.

The Kurds and the traditionally Muslim citizens of Turkey, who were isolated by the old secular guards of Turkey, have finally become visible, finding their value and getting their rights.As a matter of fact, the anti-Erdoğan campaign which has been a global bizarre in the last four years is not new for Turkish people. For years, Erdoğan was demonized by the secular elite who formerly held control in Turkey. The Turkish people, who lived under their rule for a long time, have been able to compare Erdoğan's term to their time.

In 2007, after a huge crisis during the election of the then-president of Turkey in the Parliament, the Erdoğan government introduced substantial electoral reforms in Parliament including electing the president by popular vote instead of by parliament.

People had said 'yes' in the 2007 constitutional referendum to the major change, which will eventually bring the change of system in Turkey. After 10 years, the public went to the polls on Sunday, and finalized the unfinished business. Although Western mainstream media says that Erdoğan wants the change for himself, Erdoğan himself has said on many occasions that after his elected term his successors will be the beneficiaries.

What was decided on by the Turkish people on Sunday was not for Erdoğan, but for the Turkish people who believe in him and his reforms. Erdoğan is not immortal, and his term will end one day, but this great change is his legacy, it will live forever. The anti-Erdoğan camp failed once again. Despite all the 'no' calls in an out of Turkey, the 'yes' has won.
Last Update: Apr 17, 2017 1:50 am
RELATED TOPICS