Plan to isolate Erdoğan has failed 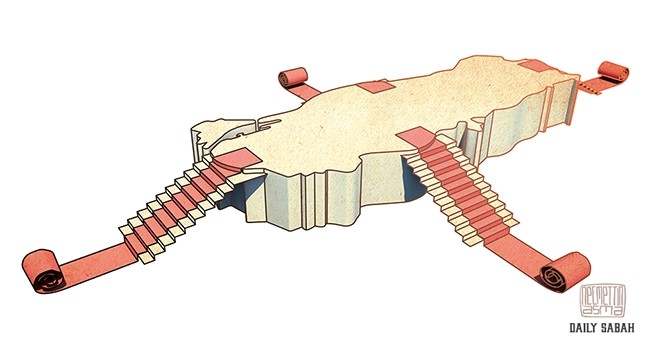 Around 50 million people in Turkey went to the polls on April 16 to vote on constitutional amendments to transform the country's governance from a parliamentary system to a presidential one. According to official results, the turnout was 85.45 percent, and Turkey said "yes" to the historic change, 51.41 percent to 48.59 percent.

Addressing Turkish flag-waving crowds from the steps of the presidential palace in Ankara that night, President Recep Tayyip Erdoğan celebrated the results in a passionate speech. However, his remarks were not just about the referendum.

Erdoğan vowed that the Euphrates Shield military operation in northern Syria would not be its last such venture in the region but its first, reiterating that it would carry out as many military operations as necessary, whenever needed, in the country's fight against terrorism.

He also criticized the initial report by the Organization for Security and Cooperation in Europe's (OSCE) election observers, some of whom are clearly biased, since they are known for sympathizing with the PKK terror organization, saying that the vote did not live up to international standards. Erdoğan stated that it was not very important to Turkey if the EU broke off accession talks. He previously said that Turkey might hold a public vote on whether to continue to pursue EU membership.

Turkey and the EU have been at loggerheads over the last few years. Until 2016, relations gradually deteriorated, as they had different views on several issues. For instance, Turkey has been fighting the PKK, which ended a ceasefire in the summer of 2015 and has killed hundreds in Turkey so far, while members of the terror organization have found a safe haven in the capitals of EU countries. Ties hit an historic low after the attempted coup by the Gülenist Terror Group (FETÖ) on July 15, 2016. The EU's lack of solidarity with its long-time ally disappointed Ankara and the Turkish public as well. Since the EU's concerns focused on the rights of suspects of the coup attempt instead of on the victims, statements from EU leaders were seen as advocating terror in the eyes of Turkish people.

Turkish-EU relations faced further rough times ahead with the Turkish constitutional referendum as EU countries campaigned for the "No" vote, and it looks like the two allies will not be able to return to the good old days any time soon, as the Parliamentary Assembly of the Council of Europe (PACE) made a decision against Turkey last week to reopen the political monitoring procedure.

For a couple of years, the West has been arguing that Turkey is going off the road, which means Turkey is not weak, quiet and obedient anymore. With its growing economy, Turkey has not been content with the master and servant relationship between the West and itself. It does not look out just for the benefit of the West; it watches its own interests. For instance, it objects to double standards between itself and other NATO countries with regard to security issues. It asks why European countries come first when it has to confront threats such as terrorism as it is geographically closer to the Middle East. The West, of course, is not happy with Turkey's objections and wants to go back to the good old days. Using international mainstream media as a tool of pressure, they have carried out a global defamation campaign against President Erdoğan in the last couple of years and dehumanized him across the globe. According to them, Erdoğan was the source of the problem; he was the one to blame as Turkey has been molded by his vision. If they get rid of Erdoğan and his courageous, non-submissive personality, Turkey could revert back, they thought.

They could not remove Erdoğan no matter what they did. Financial threats, intimidations about Turkey's NATO membership and other challenges did not work; in fact, they have made Erdoğan more popular, bolder and determined.

As they say, what does not kill you makes you stronger. On the night of the attempted coup, FETÖ members supported by the West literally tried to hunt Erdoğan. He survived, while Turkey's people poured onto the streets with his call and defeated the Gülenists. In the morning, Turkey was united against all terror groups; Turkish people were standing side by side with Erdoğan. Surveys indicate that the public strongly sees Gülenists and the PKK as proxies of the West, especially the U.S., and the only person who can bring the terror organizations in question to an end is Erdoğan. Research also shows that the people's approval for a system change increased when the terror organizations targeted Turkey. The Yes camps slogan for the referendum on constitutional change was "Say yes for a stronger Turkey." Turkey said Yes, and now it expects Erdoğan to make it stronger.

Operation Euphrates Shield started 40 days after the attempted coup by the Turkish Army got a high approval because of this trend. After Turkish troops cleansed around 2,000 sq. km of territory from Daesh elements in northern Syria, Euphrates Shield ended last month, but the public expects more cross-border campaigns to come since the threat has not ended yet. Just like Daesh, the PKK, in coordination with its Syrian offshoot the PYD/YPG, carried out many terror attacks inside Turkey over the last two years. As expected, the Turkish Army took action against PKK targets on Mount Sinjar in northern Iraq and Mount Qarachok in northeastern Syria last week. The Turkish military stated that the airstrikes were conducted "with the aim of destroying the hotbeds of terrorism, which target the unity, integrity and safety of our country and nation;" however, Turkey's allies became concerned. Now they ask if there will be more strikes or another ground operation.

New U.S. President Donald Trump, who promised during his campaign to defeat Daesh, asked the Pentagon to prepare a new plan, one better than the poor one Barack Obama had. The Pentagon gave him a new plan, but it turned out to be little more than an intensification of the same slow and steady approach of Obama's. Ankara was at odds with the Obama administration during his last term as they claimed that the best option in Syria to defeat Daesh is to work with the PKK's Syrian offshoot, while Turkey has strictly opposed this, claiming it is absurd to try to defeat one terror group using another. It was also clear that the PKK became bolder after its Syrian offshoot got support from the Americans, and instead of defeating Daesh it developed another agenda, focused on forming a PKK state on territory in Syria, Iraq and Turkey. In the meantime, Turkey proved with the Euphrates Shield military operation that it knows how to cleanse Daesh elements from the territory it seized. Now it looks like President Trump's administration is in an intense debate over whether to continue supporting the outlawed PKK in northern Syria or shift U.S. support to Turkey and its allies.

On the other hand, Turkish authorities last week detained more than 1,100 Gülenists in nationwide operations in the biggest counter-operation so far against the terrorist network, the leader of which still freely walks in Pennsylvania, U.S., while some 9,000 policemen were suspended. With that move, Ankara has shown that it is determined to clear the crypto-terrorist network that was nested in the Turkish state apparatus, formed a parallel state structure and worked for the benefit of their holder country or countries.

After a pretty busy month, Erdoğan departs on a world tour in May. His first visit is to New Delhi, India, one of the top 10 biggest economies in the world, where he will attend a business summit and focus on improving economic ties. His next stop is Sochi where he will meet Russian President Vladimir Putin in a gathering that will no doubt focus on Syria. Then in mid-May, he will fly to the Chinese capital to participate in the Belt and Road Forum. After shaking hands with Chinese President Xi, he will fly across the Pacific to have a face-to-face meeting with President Trump in Washington. That gathering will surely focus on Syria, the Raqqa operation, Daesh and the PKK as well. But also the Gülenist network will be on his agenda as well as further development of economic ties. At the end of the month, he will go to Brussels to attend a NATO meeting. Frustrating European leaders with all the high-profile official visits above, it looks like the Brussels visit at the end will have crucial importance, especially after the rising tensions with the EU.

Turkey has survived various kinds of attacks in the last few years, but the situation is not the same anymore, and the world is different than it was a couple of years ago. Obama poisoned Israeli-U.S. relations with his Iran nuclear deal; we will see if Trump changes that. Obama's term ended, and since then international mainstream media has pumped out anti-Islam, anti-Turkey and anti-Erdoğan stories without break; Islamophobia, xenophobia, skepticism and protectionism have increased in the world, especially in the West. They still have to feed the beast that they gave birth to because of the elections. After Brexit, the EU is trying to keep the rest together and the extremists away from taking control. In short, the Western world is not united against the common enemy as it once was. The world did not like the U.S.-dominated unipolar world, and it looks like they hated the U.S.-led globalization agenda. We have already started to smell new competition in the air. In the meantime, the project of isolating Turkey under Erdoğan has collapsed. It has already started to build new strategic ties with Israel, Russia and Britain. We will see what will come next after the president's world tour.