Swinging between war and peace: A day in Korea’s Panmunjom 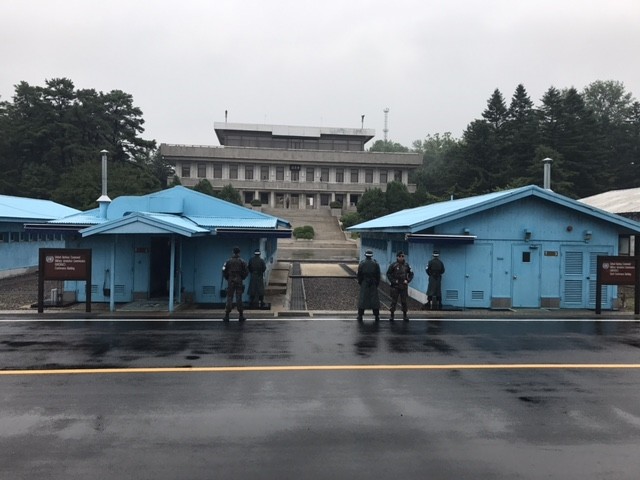 No one knows what the future will bring, but if the U.S. keeps swinging between war and talks, the Korean Peninsula will likely be shaken more

I paid a visit to South Korea last month and found an opportunity to see Panmunjom, one of the weirdest and most impressive places in the world that you can reach by tour bus. Panmunjom is a small village about 55 kilometers (34 miles) north of Seoul, which is located in the most sensitive area of Korea's heavily guarded demilitarized zone (DMZ). It has been 64 years since the truce that ended hostilities between South and North Korea was signed in Panmunjom, but as peace between the two countries was never agreed to, they are still officially at war, and soldiers stand guard at the DMZ.

According to South Korean sergeants that guided us for the tour, the DMZ is still a very dangerous place. But it is also a huge tourist draw. Thousands of tourists arrive in Panmunjom on tour buses to see the Cold War's last frontier after signing a form that begins: "The visit to the Joint Security Area at Panmunjom will entail entry into a hostile area and the possibility of injury or death as a direct result of enemy action." Repeatedly instructed to ensure safety, they are warned about many issues from proper dress code to alcohol consumption or taking pictures of unauthorized areas. Finally, when the tour begins, visitors are thrilled with the horrific history of the Korean Peninsula, the bizarre sharpness of the 38th parallel and the possibility of another conflict that could arise because of North Korea's nuclear program.

Although the Korean War formally ceased with a truce over 50 years ago, you can still feel the hostility around the DMZ, the 4-kilometer strip of land separating the two Koreas. North and South Koreans are still battling there at that border village - not physically, but with emotions, and sometimes words. "We face a real live enemy every day," was something that I heard a lot in the Joint Security Area (JSA) where our tour started among South Korean soldiers and American troops, and echoed in my mind during the whole day.

On the border where the barracks are, soldiers of the two sides on watch were glaring at each other silently. Panmunjom consists of about six barracks straddling the border and a few other buildings and watchtowers on each side. Although there is no physical barrier between them, they have not been allowed to cross the demarcation line into each other's side since the so-called Axe Murder Incident in 1976, when two U.S. soldiers were hacked to death by axe-wielding North Korean soldiers as the Americans tried to trim a tree in the DMZ. When asked why all the soldiers wear sunglasses, the sergeant replied: "To avoid possible eye contact with the enemy." In the hot and humid day with heavy rain, I stood in front of one of the powder-blue buildings where officials from the two sides met for truce talks, entered one of the barracks, touched the conference table placed directly over the border line and thought that it was like a museum of a living Cold War.

Outside this place, the tensions on the Korean Peninsula have also escalated in the past few months after North Korea launched missile tests that allegedly displayed the increasing sophistication of Pyongyang's nuclear weapons program. Four days before I visited South Korea, North Korea tested intercontinental ballistic missiles (ICBMs) on July 4, which was confirmed by U.S. officials. It was a milestone in North Korea's efforts to develop long-range missiles that can carry nuclear warheads. According to some analysts, it will take several more years and many more tests to perfect such a weapon, but North Korea's ICBMs put an increasing area of the world, including Alaska and parts of Canada, under threat.

In response to earlier North Korean tests in March, Seoul authorized the U.S. to begin its Terminal High Altitude Area Defense (THAAD) system in the country, which was previously characterized by China as a provocation. Both China and Russia called on the U.S. to abandon joint military exercises with South Korea in exchange for a freeze of North Korean tests. China has generally been considered North Korea's only major ally. But it looks like Beijing has started to develop a rather cooler attitude on Pyongyang recently. Global pressure on North Korea propelled by sharp U.S. criticism received a welcome boost last month from China, as Beijing called on its neighbor to halt its missile and nuclear tests.

In the meantime, U.S. President Donald Trump's administration signaled that it wanted harsher new economic sanctions on North Korea, doubling down on a strategy that has not demonstrably slowed the country's pursuit of nuclear technology. And on Wednesday of last week, Trump signed into law new sanctions on North Korea along with Russia and Iran. Members of Congress supported the legislation in overwhelming numbers. In addition to that, the U.N. Security Council on Saturday unanimously backed a U.S.-drafted resolution that significantly strengthens sanctions on Pyongyang with a ban on exports aimed at depriving North Korea of $1 billion in annual revenue. The sweeping measures were the first of that scope to be imposed on Pyongyang since Trump took office after so much talk, and also highlighted Beijing's seriousness to put a break on Pyongyang.

However, North Korea escalated its criticism of the U.S. as well as its neighboring allies yesterday, warning that it would "mobilize all its resources to take physical action in retaliation to the latest round of U.N. sanctions." According to the U.S. and its global supporters, the new sanctions will be the last chance for Pyongyang to stop its nuclear tests and bring Kim Jong Un to the negotiating table. However, it will affect the people of North Korea who are stuck in this mess.

Meanwhile, South Korea grappled with a severe political crisis and the election of a new president this year before the tensions with the North re-emerged. After former President Park Geun-hye, known for her harsh approach to Pyongyang, was removed by a court and jailed on corruption charges, Moon Jae-in, a liberal former human rights lawyer, was sworn in in May. Moon, whose election set up the South's first liberal government in a decade, made a campaign vow to reconsider the THAAD deployment that was authorized by his predecessors. He has favored closer ties with North Korea, saying hardline approaches failed to prevent the North's development of nuclear-armed missiles and only reduced South Korea's voice in international efforts to counter North Korea. Moon invited North Korean taekwondo practitioners who staged a historic performance in South Korea at the start of the martial arts premier international competition in June. It was the first North Korean-led International Taekwondo Federation (ITF) performance event held south of the border, and the ITF's first visit to South Korea since 2007. Moon also proposed that South and North Korea form a unified team to compete in the 2018 Winter Olympics, which will be held in the city of Pyeongchang in the South.

On July 8, I walked through the U.S. Embassy in Jongno-gu, in Seoul passing through South Koreans protesting the THAAD defense system before I headed to Panmunjom. They were saying that the nuclear test program is the last chance for Kim to raise his hand while coming to the negotiating table just like the sanctions for the anti-North alliance. When I was back in Seoul in the evening, I found myself in the middle of another protest in Deoksugung asking for a stronger U.S.-South Korea alliance against the North, carrying Trump and former President Park's posters together. They were the pessimists who do not believe in the possibility of peace, and say there are only military options. Surely no one knows what the future will bring, but if the U.S. keeps swinging between war and talks, the Korean Peninsula will likely be shaken more.