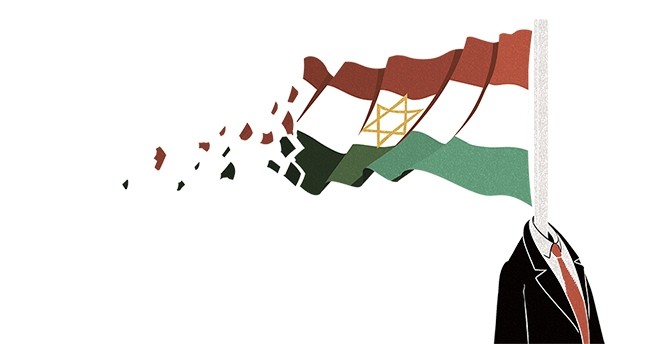 If the KRG insists on using the outcome of the controversial referendum in negotiations for its independence, the possibility of Baghdad losing the region's main oil fields could lead to a whole new conflict

Iraqi forces invaded Kuwait on Aug. 2, 1990. The main reason for the Iraqi invasion of Kuwait was economic, as Iraq could not pay its huge debts after eight years of war with Iran. Saddam Hussein accused Kuwait of overproduction of oil from the two countries' shared oilfields and keeping oil prices low.

When Kuwait refused to wipe off Iraq's war debts, Saddam came to the end of his tether and declared Kuwait the 19th province of Iraq. An international coalition was formed following United Nation Security Council economic sanctions and a series of resolutions against Iraq's aggression and hundreds of thousands of troops were sent to the region.

In 1991, Iraqi soldiers set fire to more than 600 Kuwaiti oil wells one by one. It was Saddam's last bold move. He was saying that if he could not have them, then no one can.

Energy has always been very important in the Middle East. It was not different during the 2003 U.S.-led invasion of Iraq and its aftermath, as it is today.

Kurdistan Regional Government (KRG) President Masoud Barzani's decision to hold an independence referendum in the oil rich region of Iraq has already sparked an additional crisis across the country and the region. The Sept. 25 referendum was held in three governorates that make up the region and in some disputed areas, including Kirkuk and parts of the northern governorate of Nineveh.

The KRG currently controls 20 percent of the oil resources of Iraq, OPEC's second-biggest oil producer. If the KRG declares independence within the borders that the KRG held the referendum, it would be among the top-10 largest oil producers in OPEC, which would make it an important player in the oil market, even if the disputed areas are excluded. But would this be achieved without spilling more blood?

Accusing Baghdad of failing to build a partnership with the semi-autonomous region three days before the controversial referendum, Barzani said he had been given no reason to change his mind, or the date, insisting that all offers had centered on reverting to negotiations, which have repeatedly failed in the 14 years since Saddam Hussein's ouster. He said the referendum was a means to an end "but not the end itself," and that post-referendum negotiations with Baghdad and regional partners could start within the next two years.

The development of major oil and gas reserves in the autonomous region began after the 2003 invasion of Iraq. Despite the region's significant energy potential, it was impossible for international companies to make investment prior to this, mostly because of geopolitical uncertainties after the Iran-Iraq War. The KRG started to work on the region's natural resources after gaining de facto independence at the end of the first Gulf War. However its energy developments were limited until the overthrow of Saddam, even though some oil fields were tapped.

The ratification of the 2005 Iraqi constitution codified Kurdish regional autonomy and opened the way for oil companies to invest in the region. The KRG has already shown its desire to use its oil resources to build alliances with neighbors such as Turkey and many international players.

In 2009, a local Kurdish oil company, KAR Group, took control over the Khurmala field, which is in the northern part of the giant Kirkuk field that had always been operated by the Federal Iraqi North Oil Company, leading to major disputes between the KRG and Baghdad regarding oil ownership and revenue sharing under the federal structure of Iraq. After long disputes, Baghdad and the KRG finally came to an agreement in 2011 in which the KRG would deliver 175,000 barrels per day to the central government while Baghdad would transfer 50 percent of oil export revenues to the KRG. The agreement only lasted a year. The KRG brokered the deal and stopped oil exports to the central government due to Baghdad's huge payment backlog. The two parties renegotiated in March 2014, but in a short while Daesh stormed Iraq and seized major oil fields throughout the country.

Now the lost territories, including the oil rich region of Kirkuk and other territories such as Nineveh, have been retaken from Daesh by the KRG and the central government. Ever since the beginning of the fight against Daesh, it was obvious that the question was who would take control of these territories and if it would pave the way for a new conflict in Iraq. And it looks like Barzani has been quick to make the first move.

In the meantime, since the KRG is entitled to 17 percent of Iraqi's overall budget, it has argued for a long time that it needs stable revenues to pay its bills, support over 1 million refugees fleeing the war in Syria and Iraq and finance its Peshmerga forces fighting against Daesh. However, Baghdad has not been fulfilling its commitments, and does not pay the KRG its share.

Warning that the referendum will not bring stability or more rights to Kurds in Iraq, and claiming that it might even cause a civil war and other turbulences and instability in the country and the region, Ankara already demanded the KRG stop the process, and said if their constitutional rights are the problem, it can help them to guarantee them. For nearly a decade, Ankara has championed Barzani against his rivals in the region. Turkey and the KRG have been allies, both economically and militarily. Turkish companies have helped build the infrastructure in Iraqi Kurdistan, and about 1,300 Turkish companies operate out of the autonomous region. But the most critical link between the two is oil and gas. Landlocked Iraqi Kurdistan exports its current 550,000 barrels of oil per day through a pipeline through southeast Turkey to the Mediterranean. Ankara has always defended the rights of the KRG, even sometimes against Baghdad. Barzani's decision to push ahead with the referendum despite warnings has disappointed President Recep Tayyip Erdoğan, as is understood from his statements and Ankara's recent cooperation with Baghdad and Tehran.

No one can predict what will happen next for now. But the impacts on regional geopolitics and the oil industry could be significant, as more tremors are expected in the coming days. If the KRG insists on using the outcome of the controversial referendum in negotiations for its independence, the idea of Baghdad losing the region's main oil fields could lead to a whole new conflict. Would Baghdad and Tehran, which has a lot of influence over Baghdad, allow it? Would OPEC invite an independent Kurdish state and risk angering Baghdad? Would Turkey shut the Kirkuk-Ceyhan pipeline through which the KRG's oil exports flow? Obviously, what the KRG does with the outcome of the independence referendum could change the entire politics of the Middle East.