The fateful question in Iraq of who owns Kirkuk 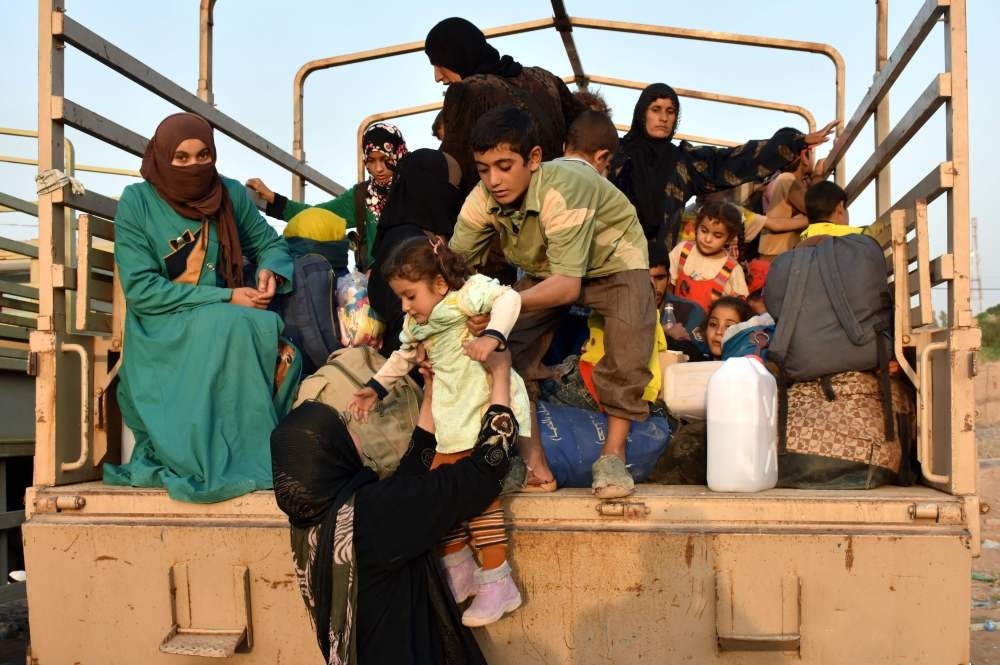 Displaced Iraqis, who fled the northern city of Hawija to escape from Daesh terrorists, arrive in al-Dibis, some 44 kilometers northwest of Kirkuk, Sept. 30.
by Merve Şebnem Oruç Oct 05, 2017 12:00 am

The question of who really owns Kirkuk, which has been a hot debate since the fall of the Ottoman Empire and the British invasion, is newly alight after the KRG referendum

Who owns Kirkuk, a northern city in Iraq with the major oil resources? This question has triggered many fights in the region for a century, and it will most probably determine the future of Iraq.

The Ottoman Empire took control of Kirkuk in the early 16th century and ruled it until British forces occupied the city in 1918, during the last months of World War I. The Treaty of Sevres in 1920 officially partitioned the Ottoman Empire into zones of influence of the Allies. Rejecting the treaty, the Turks started the War of Independence and took control of Anatolia. The borders of the new Republic of Turkey were mostly set with the Treaty of Lausanne. However, the treaty failed to solve the issue of who would control the Mosul governorate, of which Kirkuk was a part of then. Kirkuk and Mosul became a part of the Kingdom of Iraq by the Treaty of Ankara in 1926, which also set the current Iraqi-Turkish border.

The British-led and foreign-owned Iraq Petroleum Company (IPC) started to drill an oil well at Baba Gurgur near the city of Kirkuk in 1927, and began exports from the Kirkuk oil field in 1934. Considered the largest oil field in the world until the discovery of the Ghawar oil field in Saudi Arabia in 1948, the Baba Gurgur oil well has revealed the reason and the impetus behind the partition of the Ottoman Empire. Ever since then, there have been fierce fights over the oil-rich region, along with attempts to transform the demography of it by the powers that have taken control.

The exploitation of oil had a significant effect on the demographics of Kirkuk in the 1930s. Arabs and Kurds were attracted to Kirkuk, which had been a predominantly Turkmen city, in search of work, and Kirkuk started to lose its uniquely Turkmen character. The influx of Kurds and Arabs continued until the 1960s. According to the 1957 census, the city was 37.63 percent Turkmen, 33.26 percent Kurdish and 22.5 percent Arab. Kirkuk underwent a huge Arabization process during the rule of the Baathist regime that grabbed power in 1968. Turkmens were again the main victims of Arabization along with Kurds.

After the U.S. invasion of Iraq in 2003 and the overthrow of Saddam Hussein, the Kurds, who seized power in northern Iraq, initiated a massive Kurdification process in Kirkuk. Yet the Iraqi military controlled Kirkuk until Daesh stormed through northern Iraq in 2014. Following its attack on Mosul, Daesh hit the oil-rich city. The Iraqi army fled their posts there just as they did in Mosul. The armed forces of the semi-autonomous Kurdistan Regional Government (KRG), the peshmerga, were quick to step in. Claiming a prize they have long considered their own, the Kurds took control of the long-contested city. Peshmerga forces have pushed even further south of Kirkuk, taking back villages from Daesh. Even though the residents of Kirkuk welcomed the peshmerga during the fight against Daesh, the question of whether Kurdish forces should remain there or not has been a hot debate.

Since then, the KRG claims they liberated the city and that they will never hand control back to the Iraqi central government. KRG President Masoud Barzani, who triggered a major new crisis in the region holding by a controversial independence referendum on Sept. 25 in Iraqi Kurdistan and disputed territories such as Kirkuk, also made similar statements several times.

But non-Kurdish residents of Kirkuk, who have long-feared Kurdish hegemony means the completion of the Kurdification process in the governorate, are opposed to the idea. Many Turkmens and Arabs boycotted the Sept. 25 referendum, seeing it as a provocation and an attempt by Kurds to assert power in contested territory. According to them, they also have played their role in the fight against Daesh and they have suffered casualties just as Kurds have. Even though Kurdish authorities say they respect diversity in Kirkuk, both Human Rights Watch and Amnesty International have released reports that say Kurdish forces "carried out a wave of attacks, demolishing homes and driving out hundreds of Arabs from Kirkuk."

Yet, the trouble in Kirkuk is not limited to the Kurdification of the region. Thousands of Shiite fighters, who are known as the Popular Mobilization Units (PMU) in the West or Hashd al-Shaabi in Arabic, have camps in the Kirkuk governorate. Since an agreement in February 2015 that allowed the entry of the PMUs into the governorate, both Shiite militias and the peshmerga forces have been cooperating to fight Daesh along with various local forces, but the bad blood between them is a known fact. The PMU presence in Kirkuk is visible as their flags, especially the one with the insignia of the Badr Organization, one of the largest groups in the PMU, flutter on many buildings. Similar to the powerful Lebanese Hezbollah militia, Iran has much influence over these units. The PMU, which are widely known for brutality, say Kirkuk will remain part of Iraq. Just like the Kurds, they say they will never give up.

The people of Kirkuk have already been concerned that a war between Shiite militias and Kurdish forces would come next during the fight against Daesh. Unfortunately, it looks like their next nightmare that has been whipped up by the Sept. 25 referendum could come true soon.