Idlib operation will be no walk in the park 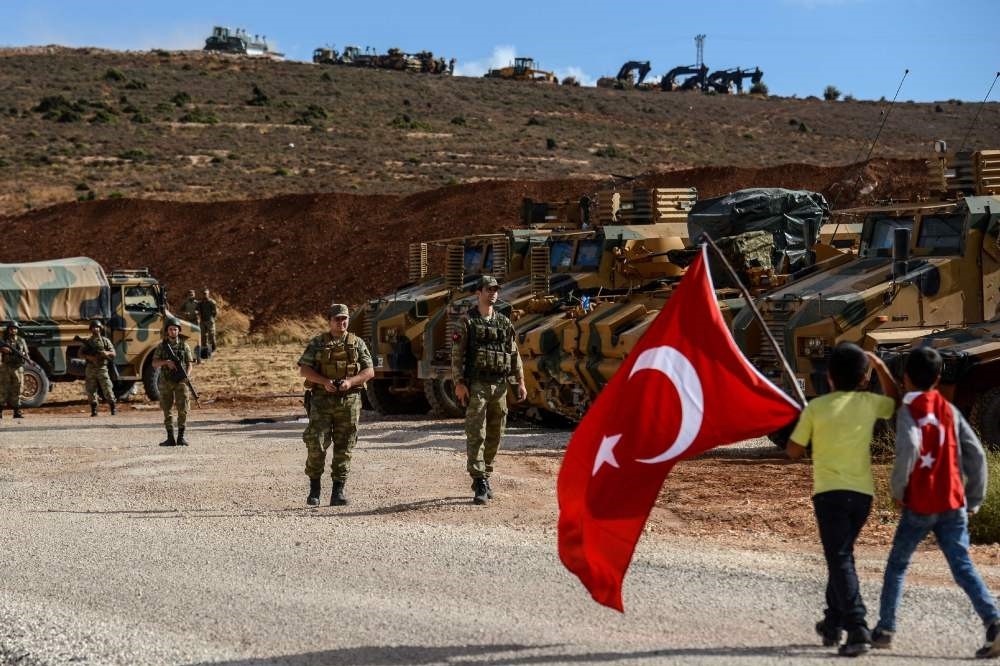 Turkish soldiers stand near armored vehicles as two boys holding Turkish flags arrive during a demonstration in support of the Turkish military's Idlib operation near the Turkish-Syrian border near Reyhanlu0131, Hatay, Oct. 10.
by Merve Şebnem Oruç Oct 18, 2017 12:00 am

A convoy of 12 armored vehicles carrying Turkish troops crossed into Idlib, Syria, late last Thursday. The Turkish Armed Forces' (TSK) move came after Ankara declared that it was sending troops into Syria to enforce a de-escalation zone in the city, which is a part of the agreement reached between Ankara, Moscow and Tehran during the latest round of talks in Astana, Kazakhstan, last month. According to a statement released by the TSK, Turkish troops will be operating in the Idlib de-escalation zone within the framework of the Astana agreement in order to observe the cease-fire, ensure the delivery of humanitarian aid and create safe conditions for civilians to return to their homes.

On Oct. 14, the Syrian news agency SANA published a report citing a source in the Syrian Foreign Ministry that said: "Damascus has strongly denounced an incursion of Turkish military forces into the country's northwestern province of Idlib, demanding the immediate and unconditional withdrawal of Turkish troops." According to SANA, citing Iranian state-owned PressTV, the source accused Turkey of not moving in accordance with the deal brokered in Astana.

The statement from Damascus can be considered as words just to save the day for Bashar Assad's supporters, so it can be ignored. The Assad regime made some similar statements after the TSK launched its grand military counterterrorism offensive – Operation Euphrates Shield – in northern Syria last year to cleanse Daesh terrorist elements from its border. However, a day after the report, the speaker of parliament in Damascus, Hammoudeh Sabbagh, reiterated the Assad regime's stance, delivering a speech at the assembly of the Inter-Parliamentary Union (IPU) in the Russian city of St. Petersburg. Sabbagh said: "The Syrian parliament demands withdrawal of Turkish forces without any preconditions," accusing Turkey of having close relationships with "the terrorist groups that are destroying Syria." Meanwhile, Moscow and Tehran have not made any comments yet. But this is the least of the risks regarding the Turkish military intervention in Idlib, which is the biggest by Turkey since last year.

The Turkish troops who crossed into Idlib from Hatay province in Turkey, headed to their observation posts on the Sheikh Barakat hilltop. Turkish Special Forces and commandos along with the Turkish-backed moderate groups of the Free Syrian Army (FSA) firstly aim to establish a de-escalation zone in the region, which is mostly controlled by the Hayat Tahrir al-Sham, (HTS). The HTS is dominated by the Jabhat Fateh al-Sham faction, which was previously known as al-Nusra Front before renouncing its ties to al-Qaida last year. Even though al-Nusra announced that it cut ties to al-Qaeda, the U.S.-led coalition sees it as a terrorist group along with Russia, Iran and Syria. Before Turkish troops entered Syria, some Russian and Syrian jets reportedly conducted more than 1,000 airstrikes in Idlib and Hama provinces following the HTS offensive against Syrian regime forces in the northwestern side of Hama.

Since the population of Idlib province has reached almost 3 million with Syrians fleeing bloody clashes and bombings in Aleppo, Hama and Homs, the Turkish military will avoid using its firepower. HTS militants, who made several statements against the presence of the Turkish-backed FSA in Idlib before the launch of the operation, have not shown any resistance yet. But it does not mean that they are about to pull out, hand over their weapons and leave Idlib. It also does not mean that there will not be any clashes between the Turkish-backed FSA and the HTS, as some HTS militants are reportedly not happy with the intervention and are eager to fight back. Civilians there who welcomed the Turkish intervention last week fear potential clashes. If such a fight emerges in Idlib, the Turkish military, which is there to implement a de-escalation zone, form a safe place for civilians and prevent a new wave of refugees to the Turkish borders, will intervene. That is why the Turkish operation in Idlib will not be a walk in park and carries many risks.

And this is not all. Idlib neighbors Afrin in Aleppo, which is held by the People's Protection Units (YPG), the Democratic Union Party's (PYD) militia, comprising the Syrian affiliate of the outlawed PKK. The YPG has apparently been backed by the U.S. in the fight against Daesh for at least three years, and this U.S. strategy is one of the main problems between the two NATO allies, Turkey and the U.S.

Even though the YPG and the Assad regime are currently competing for Daesh-held territory in Deir ez-Zor in northeastern Syria, it is known that the Assad regime gave control of northern Syria to the PYD in return for their cooperation in 2012. The PYD started to establish cantons on the Turkish-Syria border, aiming to found an autonomous PYD-controlled region in the future. Even though Turkey and Russia agreed on a unified and stable Syria during the Astana talks, several representatives of the Assad regime have made some positive remarks regarding an autonomous region. Turkey's Operation Euphrates Shield against Daesh also stopped the PYD from linking its cantons to each other to form a corridor along the Turkish-Syrian border. Turkish troops will not avoid stopping any YPG offensive on Idlib from Afrin, and there is no guarantee the YPG would make such a move.

So, although the new Turkish intervention into Syria started silently, it has a potential to lead to new clashes carrying high risks.