Repatriating Rohingya Muslims to Myanmar means sending them to death 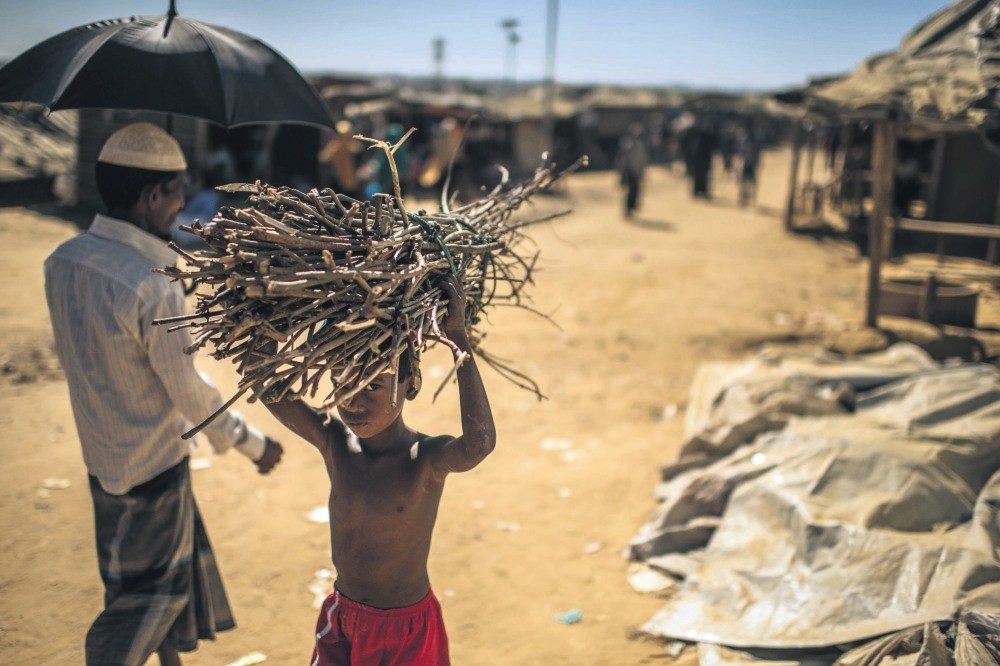 Sending Rohingya Muslims back to Myanmar is no different than sending them to death, as the Myanmar military has shown no sign of changing its brutal policies against the minority

At a U.N.-supported humanitarian conference toward the end of October, donors pledged almost $344 million to fund critical relief programs for Rohingya refugees and host communities in Bangladesh. Since Aug. 25, more than 620,000 Rohingya Muslims are estimated to have fled Myanmar to Bangladesh to save their lives because of the recent Myanmarese military-led pogrom. Bangladesh has been said to have at least 800,000 stateless Rohingya, with the former refugees and newcomers, on a 100-kilometer strip of land in the most underdeveloped part of the country. It was reportedly said that the Bangladeshi military was planning to build a "super camp," which would be one of the largest in the world.

No longer is anybody arguing about what is happening to the Rohingya in Myanmar except Myanmarese authorities. The United Nations, international human rights organizations and world leaders say that Myanmar is waging a war against Rohingya Muslims, which is a clear example of ethnic cleansing and genocide.

In the meantime, more efforts from the international community were expected to put pressure on Myanmar's authorities and to help Bangladesh – which hosts a large number of Rohingya Muslims – fund their humanitarian needs. And for now, Myanmar and Bangladesh said that they signed an accord at the end of November over terms for the repatriation of Rohingya refugees who fled to Bangladesh. As the specifics of the deal have remained unclear since it was inked, the concerns over the future of Rohingya are growing.

The Buddhist Myanmarese military has proven its brutality and has not shown any signs of taking a step back. Meanwhile, Aung San Suu Kyi, Myanmar's Nobel Peace Prize winning politician who became the most powerful man in the country after winning the elections, has done nothing but respond to international critics largely with denial and twists.

After growing international pressure, Aung San Suu Kyi, announced in October that she had plans to set up a civilian-led agency, with foreign assistance, to deliver aid and help resettle Rohingya Muslims in Rakhine state. But the details of her plans have not been disclosed yet – just like the repatriation deal between Myanmar and Bangladesh. The defenders of Aung San Suu Kyi claim that she is determined to fix the problem in the country, but she has to be careful not to inflame the situation even further.

Although Aung San Suu Kyi does not sound convincing, there is a slight possibility that she could be telling the truth because even using the word "Rohingya" is taboo. While there are not many people around the world that can deny the persecution in Myanmar, the Rohingya Muslims are not an officially recognized ethnic minority inside the country, they are referred to as "Bengalis" with claims that they are illegal immigrants from Bangladesh.

Even Pope Francis who visited the country last week did not publicly mention the Rohingya Muslims by name during his visit; instead he waited to utter the words until he was in the neighboring Bangladesh. The pontiff defended his decision saying that doing so "would have been a door slammed in the face." Pope Francis argued that his political caution enabled him to have a private meeting with Senior Gen. Min Aung Hlaing, the architect of the brutal campaign against the Rohingya, and tell him in person that the horrors of the past were no longer viable. But his political sensitivity hasn't stopped the Rohingya minorities, who think that they will all die soon, from worrying about their future.

While it is said that the repatriations are expected to begin in two months, the obstinacy of Myanmar authorities is alarming the people who are aware of their routine and the ethnically motivated violence against Rohingya, which has progressively deprived them of basic human rights for decades. The human right groups say that the repatriation of Rohingya minorities is "unthinkable as Myanmar has not yet addressed the atrocities committed against the minority population in question, let alone the system that has oppressed them so far."

Long considered one of the world's most persecuted and least wanted people, Rohingya Muslims have no legal status in the primarily Buddhist country. Buddhist monks have provoked anti-Rohingya sentiment and encouraged violent attacks for years. The Buddhist nationalist movements have repeatedly called for the annihilation of the minority group. The Rohingya have been living in Rakhine – formerly known as Arakan, a state in Myanmar – for centuries, but their citizenships were denied in 1982. They face persecution, severe discrimination, abuse and escalating violence because of their religion and ethnicity. They are subject to arbitrary arrest, torture, slave labor, burning of their villages and gang rape.

In 2011, the junta in Myanmar was dissolved following a 2010 general election and a civilian government rose to power. However, the heavy discrimination against the Rohingya did not end. In 2012, the government of Myanmar banned the word "Rohingya," while violent attacks incited by a campaign of anti-Muslim hate speech destroyed several Rohingya communities and displaced more than 100,000 people. The Human Rights Watch (HRW) called the violence against Rohingya Muslims in Myanmar ethnic cleansing and the U.N. said crimes against humanity had been perpetrated against them.

More than 620,000 Rohingya are estimated to have fled Myanmar to Bangladesh since the end of summer this year. Thousands more reportedly remain stranded in Myanmar without the means to cross the border. Analyses of satellite images from Myanmar found that hundreds of Rohingya villages had been set on fire since August, and the HRW counted at least 200 villages burned down in the latest offensive. Sending Rohingya Muslims back to Myanmar is no different than sending them to death, as the Myanmarese military has shown no sign of change in their brutal policies against the Rohingya minorities.