Opposition's best choice was AK Party's co-founder, who is next? 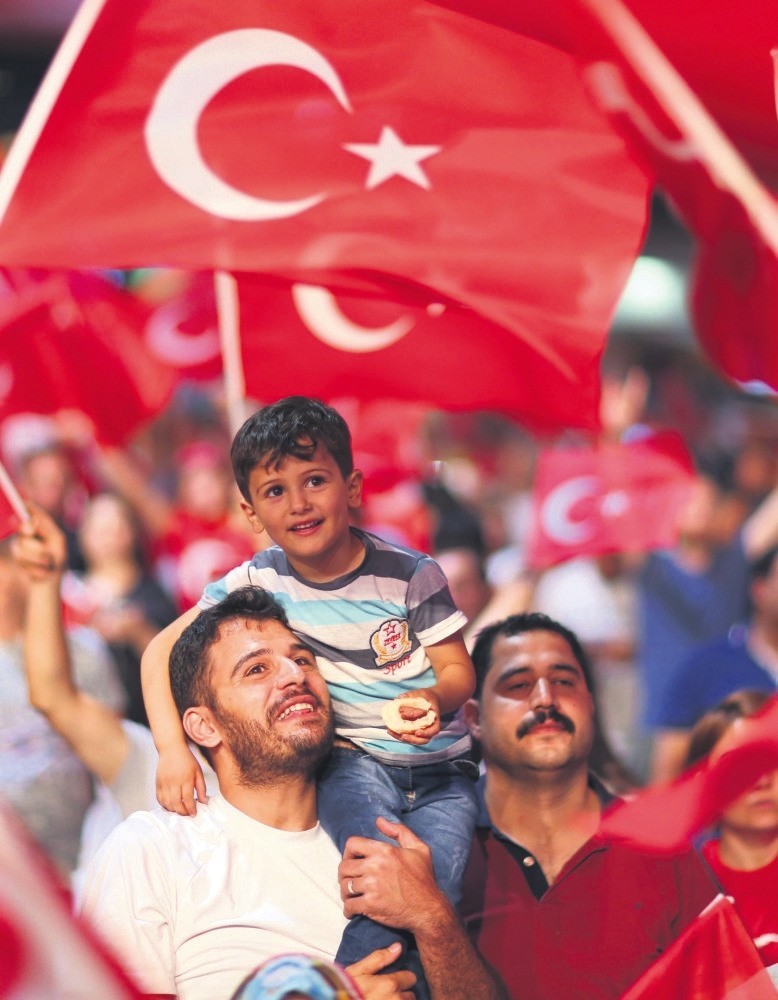 Supporters of President Recep Tayyip Erdou011fan shout slogans against the failed coup attempt as they hold Turkish flags during a demonstration in Taksim Square, Istanbul, July 22, 2016.
by Merve Şebnem Oruç May 04, 2018 12:00 am

Erdoğan and his ruling AK Party have worked very hard since the constitutional referendum, while the opposition has done almost nothing but waste time, and now they have been blindsided

Turkey is heading to the polls on June 24. The decision came a day after the Justice and Development Party's (AK Party) ally, Nationalist Movement Party (MHP) leader Devlet Bahçeli, called for snap elections last month. President Recep Tayyip Erdoğan announced snap parliamentary and presidential elections to be held in June, moving it more than 18 months earlier than planned. Right after the news, we started to see reports and analyses in Western media alleging that President Erdoğan's move was about consolidating power. Erdoğan is still the most popular leader by far in the eyes of Turkish voters, while the candidates for the presidential race of the opposition parties, i.e. the official rivals of Erdoğan, have not been determined yet. As a matter of fact, the decision to call for snap elections means that Erdoğan is giving up 18 months of his current period in office as president. With the support of the MHP in Parliament, the AK Party has no difficulty against the opposition parties with regards to passing laws, ruling the country or completing the transition period of constitutional change in line with the results of the April 16, 2017 referendum.

As is known, Turkish voters approved replacing the country's parliamentary system with a presidential one. On May 21, 2017, Erdoğan was re-elected as chairman of the AK Party after a break of some three years as the April 16 referendum changed the Constitution to allow the president to be a member of a political party.

Ever since then, he has been working for the first elections following the constitutional change. He started a transformation period in the party, renovating local administrations to bring a new wave of enthusiasm and dynamism. He and AK Party's deputy chairman Prime Minister Binali Yıldırım both visited 79 of 81 Turkish cities in that period and met with Turkish citizens.

Meanwhile, Erdoğan decided to formalize his party's alliance with the MHP in February this year; he and Bahçeli named their alliance for the upcoming elections the "People's Alliance".

European and Asian states have left behind their election periods, while Middle Eastern countries like Iraq and Lebanon will hold elections this month. The tension between regional countries such as Iran and Israel grows and carries an increasing risk of new conflicts in the region, while the Syrian civil war continues. Terror threats against Turkey from Syria and Iraq still exist as the region is far from stabilization, although Turkey's cross border operations had huge success against the terror groups Daesh and the YPG.

In addition, Ankara does not want to put on the brakes with regard to taking macroeconomic decisions or making large investments. Therefore, President Erdoğan has chosen to remove the election issue from Turkey's agenda as soon as possible.

President Erdoğan and the governing AK Party has worked very hard since the constitutional referendum but what have the opposition parties done so far? They had one job, which is getting ready for the upcoming elections, but they have failed. The genie was already out of the bottle after the constitutional referendum, and all the parties had to focus on the new presidential system and the elections immediately.

According to the new system, the parties will run to get a majority of seats in Parliament, and there will be a presidential election on the same day. Presidential candidates have to have a good reputation in the eyes of the public, and so, the opposition parties have to find suitable candidates to overcome Erdoğan.

Critics under in Turkey's main opposition Republican People's Party (CHP) have been calling for party leader Kemal Kılıçdaroğlu to announce his candidacy for the upcoming presidential bid for a long time. In a TV interview last year, ex-CHP leader Deniz Baykal urged Kılıçdaroğlu to either make an announcement for his candidacy or hold an extraordinary convention immediately to determine a candidate.

According to Baykal, the CHP should have aimed to hold the 48.5 percent "no" camp of the constitutional referendum together and focus on the election, using the referendum results as the party's road map for the future. He said the party needed to challenge itself in some way.

Seeking a presidential candidate for "no" voters to run against President Erdoğan in 2019, Baykal noted that one of the AK Party co-founders, former President Abdullah Gül, would have a good chance of winning if he were to run in the 2019 elections, saying, "He shouldn't wait to make a decision because the process will start soon."

Gül said that he did not take Baykal's remarks seriously then; however, he said that he would have considered running as a presidential candidate had there been "widespread agreement and desire" for him to do so when he announced last week that he would not be running in the June 24 elections.

So, Kılıçdaroğlu cannot dare to be a presidential candidate as he doesn't have enough support to replace Erdoğan in the eyes of the Turkish public, and such an attempt carries a major risk for him – losing his CHP leadership after a presidential loss. It looks like he listened to his predecessor Baykal's advice and asked Gül to be a candidate, but neither other influential CHP figures nor the recently-launched nationalist Good Party (İP) accepted supporting a former AK Party leading figure. While rumors about Gül's candidacy were circulating, İP leader Meral Akşener kept saying that she would also run for the presidency no matter what type of alliance was made for the parliamentary elections among the opposition parties.

The clock is ticking, and yet Kılıçdaroğlu hasn't been able find a "savior" that can replace Erdoğan and save his leadership in the CHP as well. It has often been said that there is something wrong with the opposition in Turkey, not the ruling AK Party when Erdoğan is highly criticized by Westerners because of his high approval in the eyes of the Turkish public. This might be true as there is huge resistance to change among the old guard of the party, and the first and best option as a presidential candidate for transformation-seekers was AK Party's co-founder, Abdullah Gül.