Who is to blame for the Venezuelan crisis? 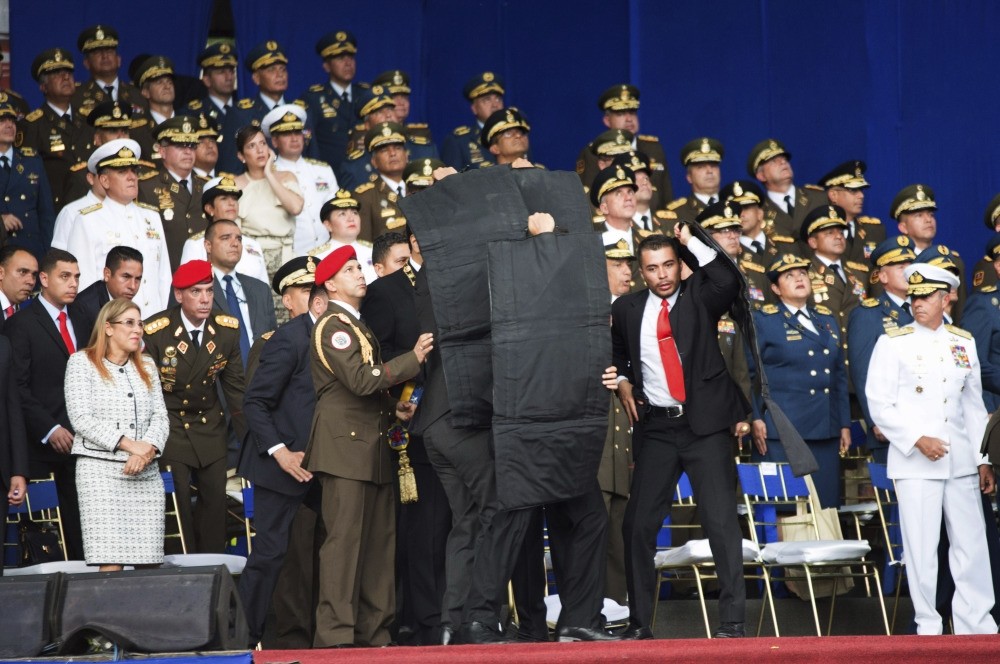 Security personnel surround Venezuela's President Nicolas Maduro after an assassination attempt made by drones armed with explosives against the president as he gave a speech in Caracas, Aug. 4.
by Merve Şebnem Oruç Aug 09, 2018 12:00 am

Washington has always made efforts to intervene in the politics of Venezuela, and can be seen as responsible for the current situation in the country and possibly in the Caracas incident as well

Venezuelan President Nicolás Maduro was delivering a speech to hundreds of soldiers in Caracas Saturday night to celebrate the 81st anniversary of the National Guard when drones armed with explosives flew toward him and exploded. "This was an attempt to kill me," said Maduro, who was unharmed during the attack, on TV hours after the incident, "Today they attempted to assassinate me."

The South American leader, who always reiterates that Washington supports his political opponents, said this week that the "far right" working in coordination with "others" in Bogota, Colombia and Miami, U.S. were responsible for the attack. Trump's National Security Adviser John Bolton told Fox News Sunday that the U.S. had no involvement in the apparent drone assassination attempt.

However, when news of the attack hit the headlines Saturday night, the first question on everyone's mind was if the U.S. was behind the attack. And that was very normal as Washington has not been a friend to Venezuela for a long time now.

According to multiple reports earlier in July, U.S. President Donald Trump repeatedly asked his top aides last year about a military option for overthrowing Maduro. As we remember, Trump publicly threatened a "military option" for Venezuela in August 2017 while he was talking to reporters at his golf club in New Jersey. The news media outlets in the U.S., which has repeatedly suggested invading Venezuela as an option to stop Maduro or at least increasing pressure over the country with more sanctions for years, said it was a surprise escalation in Washington's response to what had been happening in Venezuela. Well, it wasn't.

Of course, Trump's threatening Venezuela with a military option once again unmasked the malicious intents of U.S. foreign policy. The socialist government is desperately in need of cash and sales assets because of the deepening economic crisis; and in May, Trump stepped up financial pressure on Venezuela by banning the U.S. purchase of any debts or accounts receivables owed to Caracas or the state oil company, Petroleum of Venezuela (PDVSA).

However, long before that, former President Barack Obama already declared Venezuela an "extraordinary threat" to the "national security" of the U.S. Obama initially approved in 2014, and extended for a second time in 2016, a law titled "Venezuela Defense of Human Rights and Civil Society Act" accompanied by U.S. sanctions against several Venezuelan officials.

The law was under the pretext of the escalating crackdowns during Venezuelan anti-government protests, which started in 2013. At that time, Maduro was accusing the U.S. administration of being behind the protests. Obama's despotic bossiness, with the help of U.S. financial power, scared away investors and blocked loans. What I am saying is that Trump has just followed the footsteps of Obama, increasing the stress on the Venezuelan economy which is already in crisis. If that isn't being a foreign threat to another country, then what is?

Even before oil prices collapsed in late 2014, the oil-rich Venezuelan economy had gone into recession. As you read the financial reports, the inflation-devaluation spiral resulting with an economic crisis may be ended by floating the currency. If so, the Maduro government obviously made a mistake. But it's a very well-known fact that almost every government, when threatened by a superpower like the U.S. gets stressed, becomes paranoid, tries to take control of everything to protect its sovereignty, and inevitably becomes more authoritarian and finally makes mistakes. That is what the U.S. does to the many countries that it cannot control, and it is exactly what it did to Venezuela.

The bad blood between the U.S. and Venezuela is nothing new. Until 1999, when the late Hugo Chavez was first elected as the president of Venezuela, the country had governments that consistently had good relations with the U.S.; however, it had a poverty rate of about 50 percent despite being among the world's top oil exporters since the 1930s. During the presidency of Chavez, unemployment dropped from 14.5 percent in 1999 to 7.6 percent in 2009, the GDP per capita rose from $4,105 to $10,801 in 2011. In addition, poverty fell to 8.55 percent in 2011, while oil exports boomed – the Organization of Petroleum Exporting Countries (OPEC) put Venezuela's net oil export revenues at $60 billion; it was $14.4 billion in 1999. But relations between Venezuela and the U.S. went from bad to worse every passing year.

In April of 2002, Chavez was overthrown for two days in a military coup. According to U.S. papers, the coup was a victory for democracy, but Chavez took power back following an uprising by his supporters. The U.S. Office of the Inspector General conceded that the George W. Bush administration provided "training, institution building and other support" to groups involved in the military coup in question.

Before Chavez died of cancer in 2013, he named Maduro as his heir. Ever since then, the U.S. has been after Maduro, as it was after Chavez until his death. Images of Venezuelans rioting in the streets over high food costs, empty stores, medicine and electricity shortages have been in the headlines of U.S. news media, with all the reports putting the blame on Maduro since 2013.

As hyperinflation spirals toward enormous percentages according to estimates and the local currency, the bolivar, has become almost worthless, today Venezuelans are facing a huge crisis. Today almost all the news stories in the U.S. media start with sentences like "It's hard to believe, but Venezuela's economy was once the envy of South America. How did it all happen?" and continues with a sympathy show toward the poor Venezuelans trying to survive under "Monster Maduro." But no one says anything about the financial embargoes that have made it nearly impossible for Venezuela to restructure its debt, an essential part of economic recovery. Whereas Washington is responsible for the situation Venezuela is in today, deprived of food and life-saving medicines, just as much as Caracas is.

It is clearer every day that it has always been about bringing U.S. allies back into power in Venezuela regardless of how many more Venezuelans are hurt during the process. They started in 2002, they stepped on the gas in 2013 and they have never cared about how many innocent people have suffered. All they care about is American supremacy, nothing else.