Trump's desperate need to get Brunson back could cost him dearly 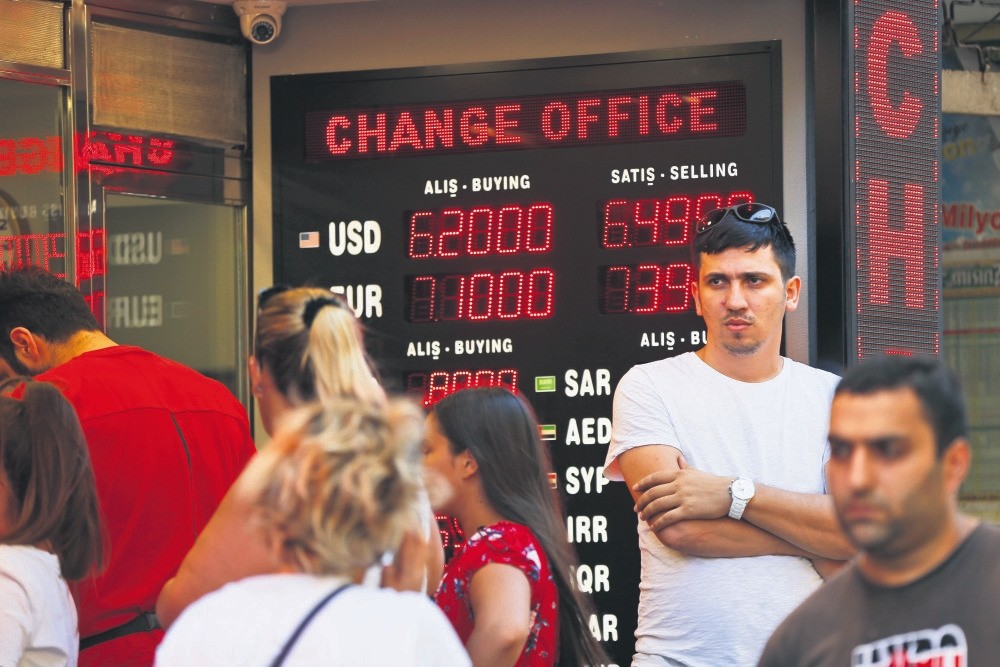 People line up at a currency exchange shop as the U.S.' manipulative attacks on the Turkish lira continue unabated, Aug. 14.
by Merve Şebnem Oruç Aug 18, 2018 12:00 am

For many, U.S. President Donald Trump's trade war may have ratcheted up quickly. However, for some who were aware of the new U.S. National Security Strategy (NSS), it had been expected since the start of 2018.In December 2017, the 68-page report put the economy at the heart of U.S. security strategy and revealed that the new NSS was laying out a world where America would be in a global economic competition with both partners and competitors. The emphasis on the economy as a national security issue was woven throughout the report, focusing on the "serious intellectual property threat" posed by China and highlighting the need for "fair and balanced trade agreements" between the U.S. and its partners.

The report indicated possible protectionism in trade that carried the risk of new trade wars. But also, it was obvious that Trump's repeated questioning of NATO allies since he came to office was to form a basis for his upcoming economic challenges to U.S. partners in Europe. When Trump unveiled plans for new tariffs on steel and aluminum imports, he did not exclude the EU as we expected.

When asked by CBS Evening News anchor Jeff Glor on July 15 to identify America's greatest foe globally, he named the European Union. He said: "Well, I think we have a lot of foes. I think the European Union is a foe, what they do to us in trade. Now, you wouldn't think of the European Union, but they're a foe. Russia is foe in certain respects. China is a foe economically; certainly they are a foe. But that doesn't mean they are bad. It doesn't mean anything. It means that they are competitive."The interview was in Scotland, a day before his high-stakes meeting with Russian President Vladimir Putin in Helsinki, Finland, and Trump had just come off a contentious NATO summit in Brussels and a trip to the U.K.

After the photos of Trump and President Recep Tayyip Erdoğan walking side by side, chatting and smiling during the NATO summit, probably no one would have thought that Turkey was the next target of Trump, as the two leaders seemed as if they were getting along very well compared to Trump's attitude towards other NATO leaders.

The latest dispute between the U.S. and Turkey was sparked by a totally different issue, but turned into an international diplomatic and economic crisis soon, which can't be spared from the trade wars Trump started this year. Andrew Brunson, a Presbyterian missionary, who was arrested in October 2016, indicted on charges of espionage and links to the Gülenist Terror Group (FETÖ) and the outlawed PKK, was at the heart of the quickly escalating crisis in the beginning. A court in the western province of İzmir ruled to move Brunson to house arrest at the end of July.

As we understand from Trump's tweets in the last five months, Trump wants Brunson to be released and sent back to the U.S. Announcing sanctions on two members of the Turkish Cabinet at the beginning of this month, Trump and U.S. Vice President Mike Pence attempted to force President Erdoğan to intervene in the judicial process instead of respecting the law. Attempting to increase pressure on Ankara, Trump declared on Twitter last week that he doubled tariffs on steel and aluminum with respect to Turkey. That is how the Brunson issue turned into an economic war between Turkey and the U.S. as Erdoğan described, while he said those threats were unacceptable, accusing the U.S. of trying to stab an ally in the back.

As the 2018 midterm election in the U.S. is on the horizon, and surely, it will be some kind of a referendum on Trump, it can be understood that the U.S. president desperately needs to get Pastor Brunson back to win the hearts of Christian voters in the U.S. However, he made a mistake by doubling the tariffs and further attacking the Turkish economy, while the Turkish lira was struggling in the last two weeks. That hurt a nation's feelings; both Ankara and the public felt offended. If there was a way to get Brunson until now, he made it almost impossible with his own precipitousness.

After the growing tension between the Barack Obama administration and the Justice and Development Party (AK Party) government, Turkey had thought that the Trump administration was ready to talk about solving the disputes. By harshly and recklessly attacking the Turkish economy now, while it was temporarily in trouble, the Trump administration has not only risked the freshly healing relations between the two countries, but also scared the rest of the world with a triggering effect for a new global economic crisis.

Furthermore, by launching steep tariffs on Chinese and EU imports, the Trump administration had already given Beijing and Brussels incentive to cooperate. Now threatening Ankara with new tariffs, Trump is pushing Europe and the others, such as China, to work together with Turkey as well. Amid the ongoing migrant crisis in the divided EU, the Europeans cannot tolerate any damage with regards to Turkish economic stability because they know if Turkey gets harmed, the next will be Europe. Also, Obama had already pushed Turkey towards Russia with his unacceptable but never-ending requests from Turkey with regards to Syria; is Trump now ready to make a similar mistake and help Turkey come closer to China.When Trump first imposed massive tariffs on aluminum and steel imports, claiming, "Trade wars are good," I asked in this column if the U.S. president is aware that the rivalries in the world are dangerously heightened, and he is putting both the U.S. economy and the world order at great risk. And I asked "if other countries would retaliate in the same way," - and Turkey did this week by doubling tariffs on U.S. goods, - how long will "the trade wars be limited wih trade?" Obviously, Trump does not think about anything else, except securing the 2018 midterm elections.