Is MBS still a reformer in the eyes of flattering Westerners? 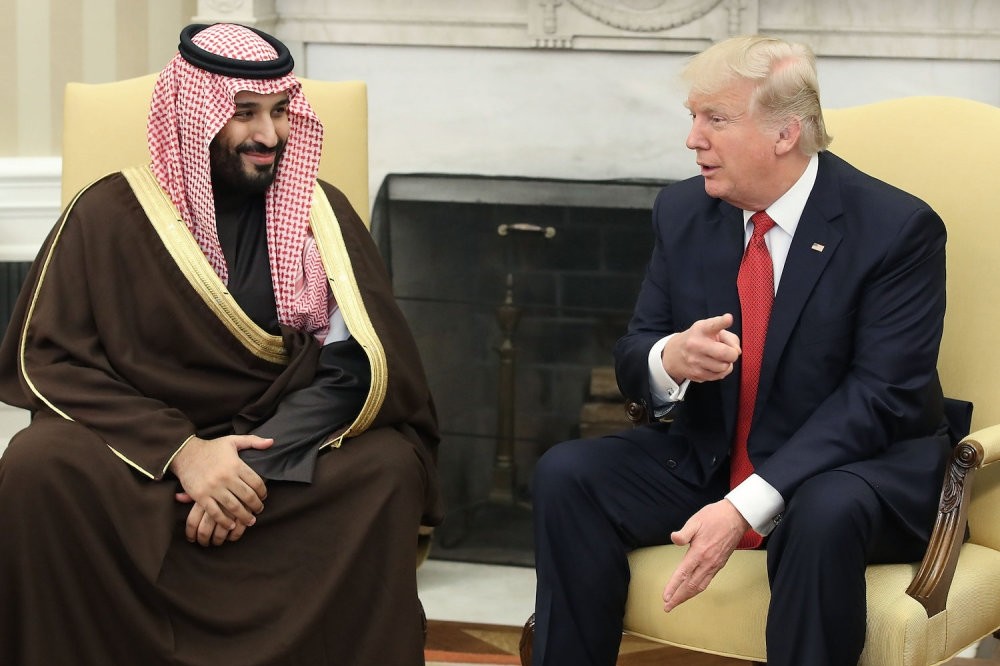 U.S. President Donald Trump (R) meets with Mohammed bin Salman, then Deputy Crown Prince and Minister of Defense of the Kingdom of Saudi Arabia, in the Oval Office at the White House, Washington, March 14, 2017.
by Merve Şebnem Oruç
Oct 11, 2018 12:00 am

The Khashoqqi incident has shown the true face of the Saudi Crown Prince, who was even until last week depicted by many Western countries as a savior who would reform the region

Although Saudi Arabia denied the allegations, many believe that the kingdom held Lebanese Prime Minister Saad Hariri captive last November. After he was summoned to Riyadh, he was effectively kidnapped by Crown Prince Mohammed bin Salman (also known as MBS) and forced to resign in a televised announcement. He had to sign over assets worth hundreds of millions of dollars.

He was another country's prime minister but he was not the only public figure forced to do such a thing. The Ritz-Carlton hotel in Riyadh was commandeered to be a prison for hundreds of Saudi royals and businessmen last year. It was first said that the Saudi authorities had uncovered corruption of over $100 billion. Then a crackdown began last November which targeted 11 princes. Among them was Prince Alwaleed bin Talal, whose $10 billion net worth makes him the 10th richest man on the planet; construction tycoon Bakr Bin Laden, billionaire Saleh Kamal and Waleed al-Ibrahim as well as 38 government officials, military officers and business leaders.

An estimated 1,700 individual bank accounts had been frozen. Then it was reported that this elite group was subjected to interrogations, torture and beatings carried out by "Blackwater mercenaries" brought in to work for the crown prince. Some were released after reportedly paying billions to get out of detention.

And yet, there has been a race in the Western world to declare the crown prince as the reforming and modernizing leader of Saudi Arabia. He has toured Western capitals, dined with European leaders. Glossy magazines put him on the headlines as the face of the "New Kingdom." His pictures were on billboards, buses and taxis in Western capitals like London and Washington as if he was bringing promising changes to Saudi Arabia.

Top Washington think tanks and influential journalists were invited to visit Saudi Arabia. From David Ignatius to Thomas L. Friedman, they all said that they couldn't believe their eyes, but yes, the modernization message of the crown prince was real: The new Saudi Arabia was open for business, investment and Western engagement.

He actually lifted a long-standing driving ban on women, marking steps toward so-called modernization, namely its "Vision 2030" project. However, the kingdom did not stop arresting many women's rights activists, who had persistently called for the right to drive, but stressed that this was only the first step toward full rights. They also called for an end to discrimination, such as lifting guardianship laws that make male relatives the decision maker on whether a woman can marry, have a passport or travel abroad. The arrested activists were portrayed as traitors by the Saudi media.

On a related issue, Saudi Arabia had a war of words with Canada on Twitter this summer, which quickly turned into a full-on diplomatic crisis. Canada's Foreign Minister Chrystia Freeland's tweet about human rights activist Samar Badawi, Raif Badawi's sister, who has been imprisoned in Saudi Arabia, angered Riyadh.

Raif Badawi's wife and his three children have been living in Quebec since they fled to escape further persecution in Saudi Arabia, and they recently became Canadian citizens.

As Freeland gave support to Raif Badawi's family and called for the immediate release of Samar Badawi, Riyadh declared the Canadian ambassador "persona non grata" and gave him 24 hours to leave the country. They also called their ambassador back from Canada, suspended "all new business transactions and investments linked with Canada" and canceled the Saudi flag carrier's direct flights to Toronto.

At first glance, it looked like a fight over the recent arrests of human rights activists in Saudi Arabia, including some with ties to Canada, but in fact, the crown prince was losing his temper. He has been spending millions of dollars for his image to be portrayed as the new revolutionary leader of the Middle East but Canada was trying to block his agenda. All the Westerners were supposed to ignore the country's horrific human rights records and help him shine his "liberal savior" image but some were dragging their feet.

The truth behind the crown prince's huge PR campaign is that the recent human rights violations in Saudi Arabia have been worse than at any time in history. Not only human rights activists or the opposition for the Saud dynasty, but even people who had good relations with the kingdom in the past but criticized them over the crown prince's policies do not feel safe in their homeland. Today many are seeking asylum in Western countries. It's not only about social oppression, discrimination or freedom of expression anymore; it is about them and their families' safety. As a matter of fact, some who managed to flee Saudi Arabia say that they are still not safe as there is no place in the world that is beyond Riyadh's reach. The disappearance of Jamal Khashoggi at the Saudi Consulate in Istanbul shows that their fears are not to be ignored.

Khashoggi, one of the most prominent Saudi journalists, was once close to the inner circles of the Saudi royal family. Following the rapid rise of the crown prince, Khashoggi criticized his internal policies, especially the discrepancies between promises of reform and the huge waves of arrests and detentions.

Khashoggi tried to continue to write and call for freedom of speech in his country, but at some point, he had to make a choice: Either he was going to shut up or he would go. His vanishing in the Saudi Consulate in Istanbul and the horrific claims over this incident show that the so-called moderate and modernizing leader of Saudi Arabia, Mohammed bin Salman, cannot even tolerate a moderate criticism. If the reports are true and if this is what they do to moderate critics, then the Westerners who lined up to butter up to the crown prince should apologize for their misleading approval and support. That is the least they can do.