A 'rogue state' behind Khashoggi's disappearance, not 'rogue killers' 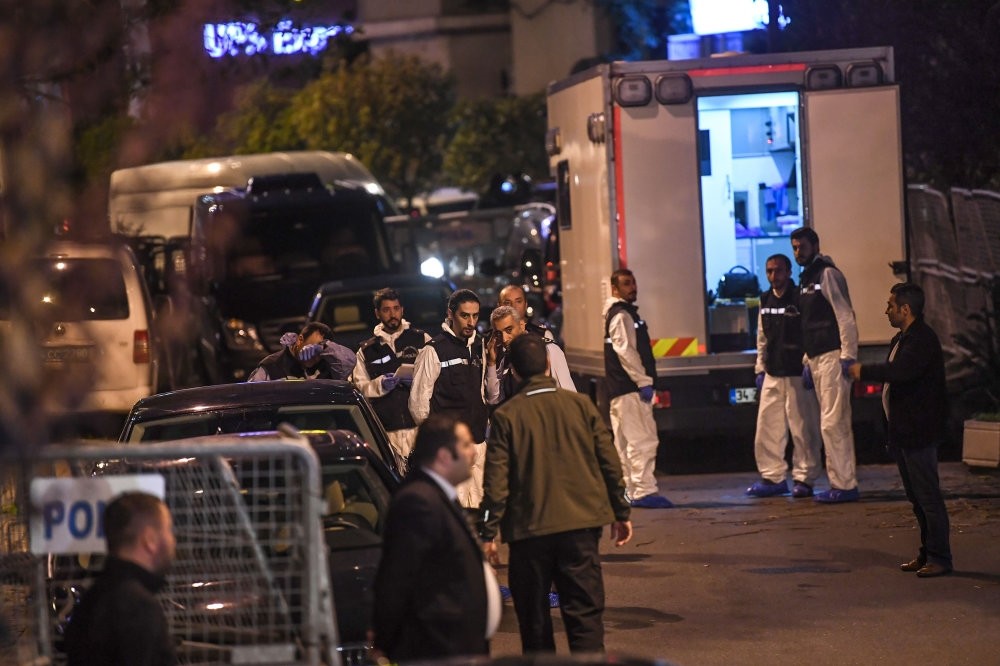 Forensic experts arrive at Saudi Arabia's Consulate in Istanbul to begin searching the premises in the investigation over missing Saudi journalist Jamal Khashoggi, Oct. 15.
by Merve Şebnem Oruç Oct 18, 2018 12:00 am

It looks like the U.S. administration has decided to defend Saudi Arabia as the global condemnation of the kingdom and its de facto ruler, the Crown Prince Mohammed bin Salman (widely known as MBS) grows over the disappearance and the possible murder of Jamal Khashoggi, a prominent Saudi journalist inside the Saudi Consulate in Istanbul.

In his latest comments about Khashoggi, who vanished inside the Consulate on Oct. 2, U.S. President Donald Trump said, "Here we go again with 'you're guilty' until proven innocent," resembling the situation to the sexual assault accusations made against the new Supreme Court Justice Brett M. Kavanaugh.

Earlier that day, U.S. Secretary of State Mike Pompeo, was in the Saudi capital Riyadh, posing for photos with MBS smiling, shaking hands and having a very intimate talk. Pompeo released a statement about his talks in Riyadh after his meeting and said that the "Saudi leadership strongly denied any knowledge of what took place in their consulate in Istanbul."

However, the Saudis, including MBS himself, insisted – for days since Khashoggi vanished – that he left the consulate in Istanbul. Turkey has asked the Saudi authorities to prove the journalist left the consulate while they released the police footage showing that he entered the building. The Saudis claimed the CCTV cameras on the premises were not working that day.

Pompeo's statement came after Trump on Monday speculated that "rogue killers" might have been responsible for the presumed death of Khashoggi. On the same day, the Saudis finally let Turkish investigators enter the building. While the investigators were still inside, the U.S. media claimed that the Kingdom of Saudi Arabia was preparing a report that will state that Khashoggi's death was the result of an interrogation that went wrong. Will they say that MBS just asked the Saudi officers to bring him back to Riyadh but Khashoggi was "accidentally" killed? That is still a mystery but sounds like an absurdity already.

On Tuesday, President Recep Tayyip Erdoğan said that the investigators were looking into some toxic material inside the consulate and something that has been painted over. While the entire world was waiting for Turkish investigators to search the Consul General Mohammed al Otaibi's residence in the probe, he left Istanbul for Riyadh on a scheduled flight.

When I talked to one of the neighbors close to Otaibi's residence two days ago and asked if they saw something strange on Oct. 2, they said: "We have been living here for twelve years but I have never seen them having a barbecue party. That day, they had a barbecue party in the garden."

If Salah Mohammad al-Tubaigy, who was part of the 15-member-squad that arrived in Istanbul that day and has been identified as the head of forensic evidence in the Saudi general security department, cut Khashoggi's body up in a horrific way as claimed in several reports, then there is a possibility that they got rid of his body in the residence and they had a barbeque party to suppress the smell. If the canceled investigation on Oct. 16 would take place soon – and we still don't know if another cleaner group entered the residence, just like they did ahead of the inspection in the consulate – there is a high possibility that the Turkish authorities will come close to revealing all the details about Khashoggi's fate.

As a matter of fact, Turkish authorities look like they are quite sure that Khashoggi's life was taken that day by a death squad of 15 people. They put pressure on Riyadh to admit the horrific crime, or at least not to deny it, by step-by-step leaking of the information that they already had to local and international media.

Turkish authorities may be very close to revealing all the details but finding the one who ordered this killing is another issue entirely. It was the U.S. media who alleged that the crown prince ordered an operation to lure Khashoggi back to Saudi Arabia from his home in Virginia and detain him, according to U.S. intelligence reports. That was one crucial piece of evidence implicating that MBS was indeed chasing Khashoggi.

According to a recent New York Times report, Maher Abdulaziz Mutreb, one of the 15 suspects identified by Turkish authorities in the disappearance of Khashoggi, was a frequent companion of MBS and traveled extensively with him, perhaps as a bodyguard.

In addition to al-Tubaigy, who could only be directed by a high-ranking Saudi authority, at least seven others were linked to the Saudi crown prince's security circle. They were not just regular tourists as Saudi authorities alleged in the first place. Besides, the records show that the two private jets that arrived and left Istanbul in less than 24 hours were chartered by a Saudi company with close ties to MBS.

While all these details indicate that MBS gave the order to kill Khashoggi, President Trump is trying to save the crown prince, a close friend of his son-in-law Jared Kushner. Some in the media say that the crown prince's dream of ascending the throne may be coming to an end, but I don't see that when I look at his photos with Pompeo. A giant rescue package has just gone to his feet and Riyadh has welcomed it. Trump downplayed the disappearance last week by putting forward that Khashoggi was not a U.S. citizen but a permanent resident.

When he says, "As to whether we should stop $110 billion from being spent in this country that would not be acceptable to me," it is obvious, there is a lot at stake for Trump – I mean billions of dollars – and he is ready to blame some "rogue killers" and bury justice for Khashoggi with a "rogue state."