They are inspiring terrorists, not just 'lone wolf' white supremacists 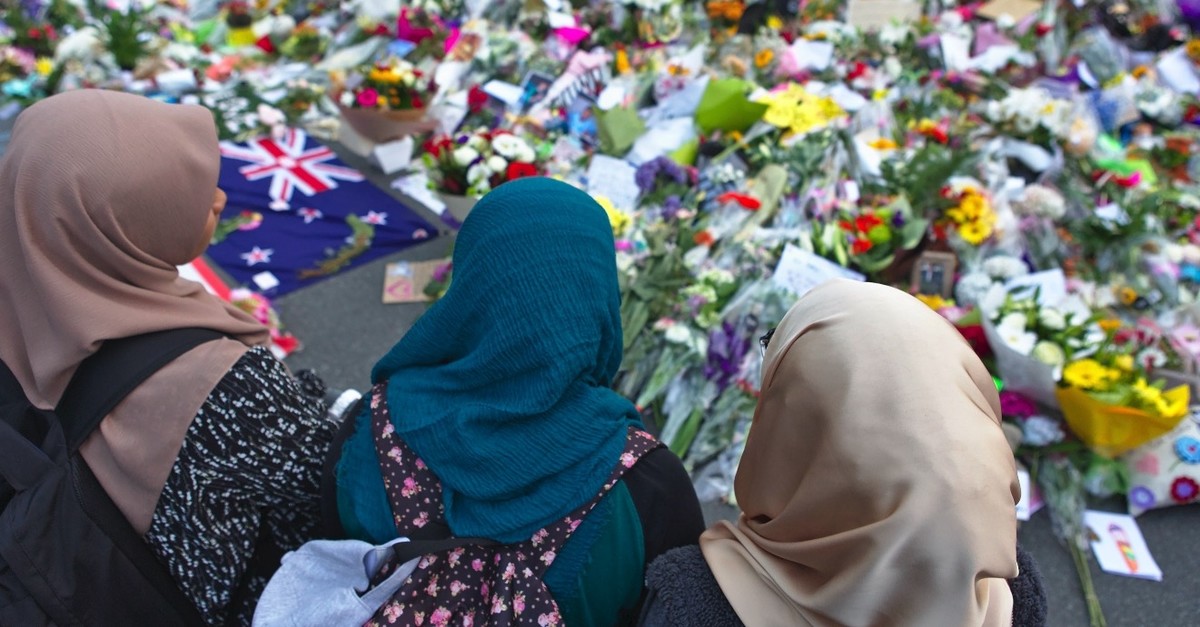 It is so sad and worrisome to see people like Tarrant, who are full of hate against all the Muslims in the world, including Turkey, embarrassing their grandfathers and betraying their memories

March 15, 2019, was a horrible day that will not be forgiven nor forgotten by Muslims around the world. Innocent people, civilians who believe in Islam, are either being targeted by terror groups or being scapegoated for the acts of terrorists. Daesh, the notorious terror organization, not only attacked the Western world, but also killed civilians in Iraq and Syria during the days it shook the world – and most of the victims were Muslims. Muslims have also been weak targets for white supremacists since the rise of the extreme, far-right and left parties, groups and ideologies in the last few years.

Many intelligence agencies in the West have warned that extremist groups have been buying and taking up arms for a while. However, it was shocking to hear the tragic news from New Zealand, which is the second-most peaceful country in the world. Maybe, we shouldn't be surprised as Anders Behring Breivik, who killed 77 people on July 22, 2011, and whose terror attacks were described as "lone wolf" domestic terrorist attacks, carried out his meticulously planned attack in Norway, another peaceful country.

Just like Breivik's case, this time, Brenton Tarrant, the Australian terrorist, carried out two preplanned attacks on two mosques in Christchurch, New Zealand on Friday and methodically killed at least 50 people, including children.

The Norwegian terrorist Breivik, who was convicted as a "lone wolf," wrote a 1,500-page long manifesto, in which he explained his extreme view of his Nordic race being threatened by Islam due to the actions of "domestic traitors," such as multiculturalists and "cultural Marxists." His text called for the deportation of all Muslims from Europe and offered a guideline for preparing similar violent attacks.

Likewise, Tarrant penned a 74-page manifesto that he published around the time of the shootings. Revealing his admiration for Breivik, Tarrant also praised U.S. President Donald Trump as "a symbol of renewed white identity and common purpose." The White House chief of staff rejected Tarrant's claims saying, "The president is not a white supremacist;" however he added, "Let's take what happened in New Zealand for what it is: A terrible, evil, tragic act." He couldn't utter any word that would sound to our ears something like "terrorism" while Trump, himself, has not voiced a strong enough condemnation of white nationalists.

As we know, Trump's base supporters mostly include far-right groups who have hatred for Muslims as well as anti-immigrant sentiments. David Duke, a very well-known white supremacist and a leader of the Ku Klux Klan, is one of Trump's main supporters.

In addition to that, the Australian terrorist filmed his massacre via a body camera and the whole recording was in the style of a violent video game. This move by Tarrant was similar to how Daesh terrorists recorded and spread the videos of super-bloody killings. Just like Larossi Abballa, who claimed allegiance to Daesh, broadcast his killing of two police officers in Paris on Facebook live, Tarrant livestreamed his massacre on the same social media platform on Friday. His recording of the cold-blooded massacre shocked and awed people who watched it, and millions of uploads spread on Facebook in a short while until the social media company removed the videos.

The horrific video sparked outrage among Muslims all around the world, as well as non-Muslims who still care about human rights and who cried with Muslims for the innocent people killed and severely wounded by Tarrant, while at the same time it probably inspired white supremacists. New Zealand's Prime Minister Jacinda Ardern said on Sunday that there were "further questions to be answered" by Facebook and other social media sites over their late response to the tragic incident.

Jacinda Ardern's humane, compassionate and determined stance against the terrorist attack who described the "shootings" as a "well-planned terrorist attack" helped people calm down and made us hope that it would not be swept under the carpet. Australia's Prime Minister Scott Morrison also described Tarrant as an "extremist, right-wing, violent terrorist," however, no one can deny that normalizing Islamophobia in Australian papers, and some Australian politicians' portrayal of Muslims as "invader," is now paving the way for white supremacists to dare such bloody attacks.

For instance, the former Australian prime minister is known for uttering his doubts about Islam as "being a peaceful religion." While Sen. Pauline Hanson recently compared Islam to a "disease" that had to be "vaccinated," another Sen. Fraser Anning, suggested that his country must adopt a "final solution" approach to end Muslim immigration. According to reports, especially in Rupert Murdoch-owned Australian newspapers, have produced thousands of negative stories on Islam and its believers, and they have been very successful at dehumanizing Muslims and obviously encouraging white supremacist terrorists to dare to act.

As Breivik has become an icon for people like Tarrant, Tarrant will also inspire potential white supremacist terrorists after last week. The manifestos they wrote have already become some holy books for their followers. Even if their massacres are "lone wolf" attacks, they are not alone, and they are bringing their fans and followers together and encouraging them to be organized. Muslims are now getting more and more sure that there will be another preplanned, but this time organized, massacre unless world leaders and the media stop whitewashing those criminals and encouraging them; they just don't know where and when. In return, they think that they need to find guns to protect their homes, families and communities since they are scared and fear for their lives.

Tarrant's long manifesto also angered Turkish society as he expressed his views about Turkey. In a very threatening way, he calls out to Turks saying, "You can live in peace in your own lands, and may no harm come to you. On the east side of the Bosphorus. But if you attempt to live in European lands, anywhere west of the Bosphorus, we will kill you and drive you roaches from our lands," finishing this part of the manifesto with these words: "Flee to your own lands, while you still have the chance." Well, it is very well known that Turkey is famous for being a country that's soil spans two continents.

For instance, my hometown is Lüleburgaz, a very nice town on the European side of Turkey. People like me have been living on that soil for hundreds of years, and I have found it very irritating to hear such a thing from someone who is 16,000 miles away from our land.

Tarrant's threats against Istanbul have also provoked the Turks "We are coming for Constantinople (Istanbul) and we will destroy every mosque and every minaret in the city. The Hagia Sophia will be liberated from the minarets, and Constantinople will be rightfully Christian owned once more." The Turks are now pushing the Turkish government to change the Hagia Sophia's museum status to a mosque after being tempted by Tarrant's manifesto. Since it is revealed that Tarrant visited Turkey two times in the last couple of years, many people are asking questions if he was organizing other white supremacists or was a part of such an organization. That is why Ankara has to take measures against such threats and not simply waiting for New Zealand's investigation. We should carry out our own investigation since we cannot sit and wait after such threats.

Turkey marked the 104th anniversary of the Gallipoli campaign on March 18, just a few days after Tarrant's massacre. And almost all Turks remembered the upcoming Australian and New Zealand Army Corps (ANZAC) day, which is on April 25. The Battle of Gallipoli was one of the most critical scenes in Turkey's history, as well as for Australia and New Zealand. It was a fight for the survival of a nation for Turkey; it was a struggle for life or death. The victory in Gallipoli didn't help Turks win World War I but it gave hope to resist and start the war of independence a couple of years later. The resistance is honored every year on March 18 in Gallipoli and on the shores of the Dardanelles.

Gallipoli is also of significant importance to Australia and New Zealand. Each year, on April 25, they commemorate the ANZAC soldiers who died in Gallipoli. It was a battle away from home. It wasn't even their war. They were dominions of the British Empire when the war broke out. Gallipoli is now a symbol of their national identity and existence. They say their nations were born on the shores of Dardanelles. Today Mehmeds and Johns are resting side by side there. It is so sad and worrisome to see people like Tarrant, who are full of hate against all the Muslims in the world, including Turkey, embarrassing their grandfathers and betraying their memories. Will we go back to the days when millions died in the world wars? Let's hope not. Let's hope that all kinds of terrorism can be condemned in the same way. We are already on the edge of the cliff; if it cannot, we will we soon find ourselves falling down altogether.