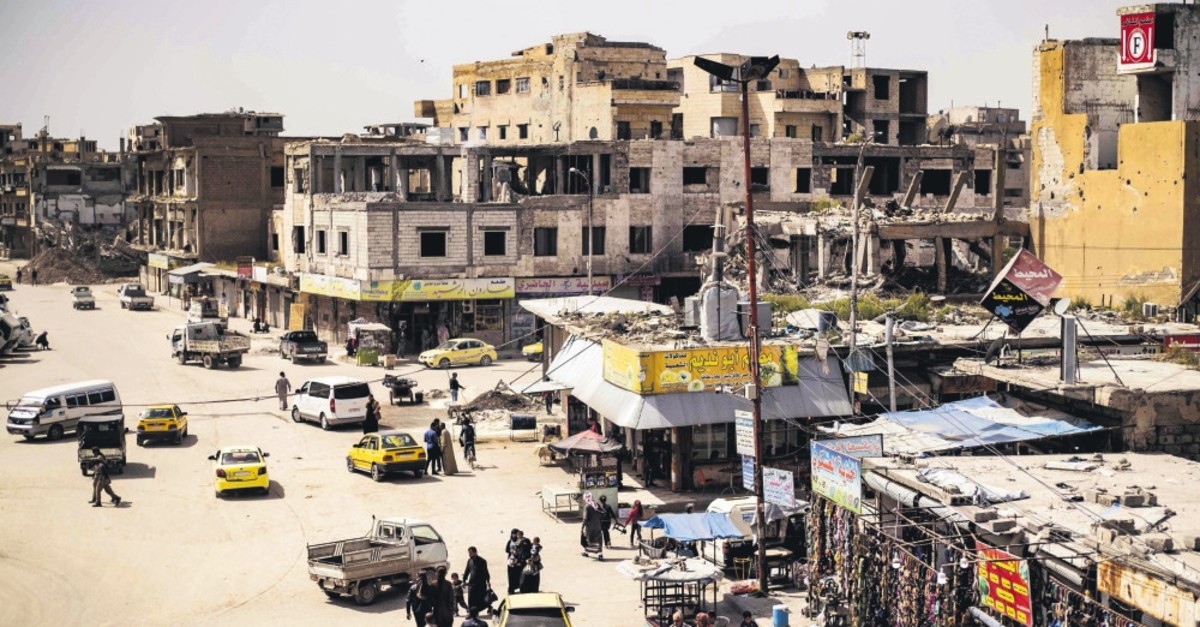 If the U.S. continues to threaten Turkey over its S-400 purchase and some sanctions, Turkey will continue to respond in kind and maybe get the offer that it wants from Iran

Iranian Foreign Minister Javad Zarif paid an official visit to Ankara this week. Just a day before this visit, Zarif was in the Syrian capital Damascus where he met Syrian dictator Bashar Assad.

His Damascus and Ankara visits were ahead of a new round of talks in Kazakhstan, which started with a first meeting held in January 2017 in order to reach a cease-fire in Syria. The three guarantor states of the de-escalation process have been Turkey, Russia and Iran since then. This is in spite of the fact that Russia and Iran have been the protectors of the butcher Assad and Turkey has tried to protect the Syrian civilians who fled their homes since 2011. These talks have also been important for Turkey in another aspect, as Turkish NATO allies led by the then-Obama administration of the U.S. abandoned Turkey with risks growing along the border of the country and decided to support the outlawed PKK's Syrian branch the Democratic Union Party (PYD). As it is known, the PKK is not only a terror group in the eyes of Turkey, but it is also a designated foreign terror organization for the U.S. and the EU.

Damascus made a statement after Zarif's visit on April 16 and said Zarif and Assad discussed "the next round of Astana talks and the importance of lasting communication between Damascus and Tehran for continued cooperation." The upcoming Astana talks, recently renamed Nursultan, will be on April 25-26.

At the beginning of the talks, Tehran was not eager to initiate in a de-escalation process, but eventually it came to the table since Russia was there. Tehran has been the leading protector of Assad, even more than Moscow, since the beginning of the uprising in the country, which quickly turned into a devastating civil war. There have been many conflicts of interest between Iran and Russia on the ground since Russia was invited to come and join the war in Syria instead of giving support from outside and Putin decided to do so. The cases of Russia acting out of sync with Assad's Iran-backed allies in the war have been increasing day by day, and speculations that Russia will force Iran out of Syria have been growing. Of course, such kinds of acts would make Israel and the U.S. happy, especially after U.S. President Donald Trump's latest decision to designate Iran's Revolutionary Guard Corps (IRGC) as a terrorist organization.

Iran-backed militias and Iran-supported Hezbollah were the first to enter Syria to help the Assad regime face the Syrian opposition fighters and spilled enormous blood inside. Qassem Soleimani, a major general of the IRGC and the famous commander of the Quds Force, a division primarily responsible for extraterritorial military and clandestine operations of Iran, has been the brains behind the Iran-backed attacks against Syrian opposition fighters and a mentor of the Assad regime to determine strategies to defeat the opposition. Also it was reported that Soleimani was the messenger who went to Moscow and invited Putin to join the battle in 2015 after Iran lost a lot of men including generals on the ground.

It was crystal clear that there would be problems with regards to controlling territories in Syria between Russia and Iran as well as deciding the future of Syria after they change the balance of the war together. For instance, when Israeli warplanes have attacked bases belonging to Iran's elite Quds Force, Russia has done nothing to stop them. In addition to that, there are many reports alleging that Russia and Israel have a deal over Iran's presence in Syria. Accordingly, Russia would try to leash Iran as much as it can, while Israel will not attack the Syrian regime until Russia initiates its endgame. If these rumors are true, we can say that Iran is now getting more and more isolated in the war-torn country.

Most importantly, the tensions between the Assad brigades show the growing conflicts between the Iran-backed and the Russian-backed forces on the ground. According to the sources on the ground, some bloody fighting recently took place using heavy weapons in Hama between Russian-backed and Iranian-backed groups over areas of influence. Sources also alleged that Russia has taken control over the fronts and that it gave military power to Brig. Gen. Suhail al-Hassan, who was known as a man loyal to Assad but now has become a trusted man of Moscow with his obedience to Russian orders. It has been said that after Russia took full control of the Abu al-Duhur Airbase, it withdrew forces and handed it to al-Hassan.

Accordingly, the relationship between al-Hassan and Bashar Assad's brother Maher, another leading commander in the Syrian army, has been very strained and Maher is accusing al-Hassan of being a traitor, while noting that al-Hassan does not take any orders from the Syrian defense minister anymore. That is why, Assad's trip to Tehran at the end of February, was also a message to Moscow saying that they would not abandon Assad. During his meeting with Iranian Supreme Leader Ayatollah Ali Khamenei, Maj. Gen. Qassem Soleimani was sitting next to Assad. That frame made us recall Putin's surprise visit to the Russian Khmeimim airbase in Latakia where he treated Assad like a low-ranking bureaucrat. Those are other signs of disagreements between Russia and Iran over the fate of Syria, and especially Assad.

Iranian Foreign Minister Javad Zarif announced his resignation on the night of that meeting, but it was not accepted. He is still in on the game, probably because he has been the leading figure of Iran during the nuclear negotiations with P5+1 countries. After Trump's withdrawal from Obama's nuclear deal and increasing pressure over Iran with sanctions every day, it has become a crucial question for Iran on how European countries react after Trump's challenge. Even though the EU countries looked as if they are not sharing the same idea with the U.S., we don't know if they will change their minds following the EU-U.S. trade talks. If the trade talks go well, Iran can find itself lonelier in the desert with unbearable financial problems along with its internal issues.

As it is known, Trump wants to cut Iran's oil exports to zero, and has encouraged producers such as Saudi Arabia to pump more to meet the shortfall. After Trump's first sanctions to Iran, Russia struck a private deal with Saudi Arabia in order to help to raise oil output to cool rising prices. Iran accused Saudi Arabia and Russia of breaking the Organisation of the Petroleum Exporting Countries' (OPEC) agreement on output cuts by producing more crude, threatening the two countries that they would not be able to produce enough oil to make up for a reduction in Iranian exports. Oil prices are rising due to the cuts led by OPEC, as well as U.S. sanctions imposed on Iran and Venezuela and the resume of the fighting in Libya.

The White House is planning to toughen sanctions on Iran and Venezuela significantly, and the next decision on Iran sanctions is scheduled for the first week of May. Now Trump has to decide if he will let oil prices rise and crude oil hit a year high or lose its advantage against Iran. To be honest, his decision is likely to be directly tied to the production increase of Saudi Arabia, and indirectly to Russia since the Saudi kingdom's production capacity will not be enough to replace the lost barrels.

That is why, Zarif's visit to Ankara after his meeting with Assad in Damascus is really important as Turkey can play a big role in this energy fight.

"I had a long interview with Bashar Assad. I will be giving details of these discussions to Mr. Erdoğan," Zarif told reporters in translated comments before Turkish President Erdoğan received Zarif at the Presidential Complex where they had a closed-door meeting lasting over an hour. We don't know what Zarif offered President Erdoğan but it is obvious that Iran needs Turkey's help as it find itself in a tight corner. Turkey can help Iran with regards to its energy exports as it did in the past. But the problem for Iran is that it is trying to save Assad while trying to resist U.S. sanctions and survive the economic fight with the U.S.

If Zarif came with Iran's previous offers such as letting Assad take control of the Syrian border through Turkey, I don't think that it will be enough for President Erdoğan. Turkey wants to cleanse the U.S.-backed People's Protection Units (YPG) and other terror elements throughout its border but Erdoğan will never trust Assad, or even Iran in Syria after all that has happened in the last eight years. Ankara will not be satisfied with such an offer since we know that President Erdoğan is not a person that would forget what Assad did for years in Syria, including giving the north of Syria to the YPG in 2012 in the first place. Assad is a butcher in the eyes of Erdoğan and it will never change even though many pro-Assad analysts say otherwise.

Since Iran felt that it has been back-stabbed by Russia both in Syria and its economic war with the U.S., it has to find another way to survive. This way today is by passing through Turkey. Furthermore, Russia is not eager to compensate Syria's energy needs, Iran is also carrying that burden free of charge. So Iran has to give a high-value offer to Turkey this time, without tricks like it did in the past.

On the other hand, the Trump administration also needs Turkey not to take a step back on its economic war against Iran. If the U.S. continues to threaten Turkey over its S-400 purchase and some sanctions, Turkey will continue to respond in kind and maybe get the offer that it wants from Iran. That might put Turkey in a difficult position for a while but also Trump will not be able to control oil prices and he will lose his advantage against Tehran. Moreover, the Trump administration can also waste Russia's deal with Saudi Arabia to recover oil production if it blocks Turkey's S-400 deal with Russia. We will see what will happen next in this super-fast changing cycle, but it seems like Turkey will have a final word in this crazy game.