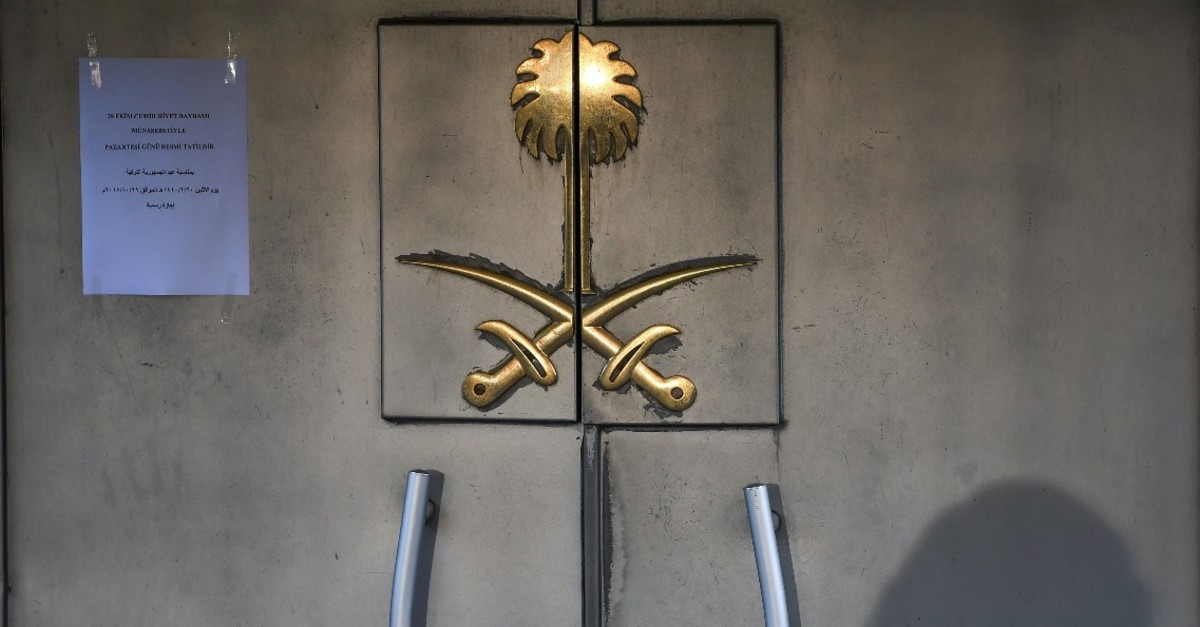 The shadow of a security member is seen on the door of the Saudi Arabian Consulate in Istanbul, Oct. 29, 2018, while the investigation into the murder of Saudi journalist Jamal Khashoggi is underway.
by Merve Şebnem Oruç Apr 24, 2019 12:14 am

Turkish authorities arrested two intelligence operatives in Istanbul last week suspected of spying for the United Arab Emirates (UAE) on Arab nationals. The spy ring reportedly confessed to the charges and said their intelligence operation aimed to target political exiles and students from the Arab world, especially Saudi and Egyptian dissidents, as well as to form an anti-Turkey structure.

Judicial sources say that the two UAE nationals were detained as part of an investigation led by the Istanbul Chief Public Prosecutor's Office and were brought to a court on charges of political, military and international espionage. Both are also suspected of links to Hamas and Mahmoud Abbas rival, Abu Dhabi-embraced Mohammed Dahlan, a close and powerful adviser to Emirati Crown Prince Mohammed bin Zayed Al Nahyan. Since one of them is suspected of having connections to the murder of Saudi journalist Jamal Khashoggi, who was brutally killed on Oct. 2, 2018 in the Saudi Consulate in Istanbul by a Saudi hit squad, Turkey is investigating that aspect as well.

After Turkish intelligence put the two under physical and technical surveillance following their suspicious activities, it was found that they were gathering information from their contacts in exchange for money. Evidence of money transfers through UAE-based banks was found in encrypted computers seized in a hidden compartment at what the Turkish officials described as the spy ring's base, sources say. If there is a link between the Khashoggi murder and the UAE spies, it will come out after the digital evidence gathered by the Turkish security officers is analyzed.

However, the alleged link between the two and Dahlan is more than enough to think that they were not in Turkey with good intentions. Once a prominent official in Fatah, Dahlan was ousted from the group in 2011 following accusations of skimming tax revenues and corruption. Denying the charges, he remained a powerful figure on the sidelines, forging ties with the leaders of the Arab world. Dahlan was also in close contact with the CIA and Israel's Shin Bet security service. A Wikileaks document revealed those links and his profile as an intimidating figure. Many people today believe that Israel initially planned that he might be a possible future leader of the Gaza Strip. But today, it is widely believed that he also had a hand in the iconic Palestinian leader Yasser Arafat's mysterious death.

Dahlan played a role in the confrontation with Hamas after it won Palestinian elections in 2006, especially during the June 2007 CIA-backed and UAE-funded coup in Gaza, which backfired and led to the defeat of Fatah. For then-President George W. Bush, Dahlan was "our guy." He was relocated to the West Bank, where he was still seen as an asset by the Israelis, but he fled in 2010 to the UAE. Today, he is the arch-foe of Mahmoud Abbas and is the adviser of the de facto ruler of the UAE, the Crown Prince of Abu Dhabi, Mohamed bin Zayed (MBZ), who officially runs the armed forces. Once Arafat's strongman in the Gaza Strip, Dahlan is now one of the most dangerous people in the Middle East. He was also quietly granted Serbian citizenship four years ago after a closed cabinet meeting session. Most probably it was because he had served Serbian "state interests" after investing billions of dollars in Serbia. The UAE has used those investments in Serbia's arms trade to distribute weapons in the Middle East and to act as a proxy for Israel.

As a matter of fact, the UAE's collaboration with Israel dates back to the 90s. According to archived reports, the recent close relationship between the Emiratis and Israel started after MBZ wanted to buy a fighter aircraft but was suspicious that Israel would object. MBZ met with Israeli leaders with the help of George H. W. Bush and made Israel believe that it and the Gulf states had one common enemy: Iran. Israel raised no objections to the sale of the U.S. fighter jets to the UAE afterward, the reports said. Of course, both sides deny those meetings; however, the relations between the two countries has become more visible in the last couple of years. Not only pro-Israeli think tanks funded and supported by the UAE, but also diplomatic, military and regional contacts between the two countries have increased year by year. We can say that there is trust between Israel and the UAE. They are walking toward the same goal, and this goal is not only about Iran.

To be honest, I am suspicious that the UAE sees Iran as the biggest enemy. Remember, Gulf countries have supported the opposition fighting in Syria against Bashar Assad, who has been backed by Iran since the beginning of the civil war. Anisa Makhlouf, Assad's mother, left the war-torn country in 2013 and joined her daughter in Dubai until she died. Her daughter Bushra's husband was an army deputy chief of staff until he was killed in a bomb attack at the National Security Headquarters in Damascus in July 2013, and she enrolled her children in a private school in Dubai. In addition to that, a large number of businessmen and wealthy Syrians who had close ties with the regime fled the deadly bloodshed in Syria to Dubai. You might say that this is about Syria, not Iran; however, the UAE banks, including state-owned ones, channeled billions of dollars from Iranian oil sales through its accounts during the sanctions before the Iran nuclear deal. In addition to that, Iran has always been the UAE's top destination for re-exports, or goods imported into the UAE and sold on to Iran.

he Syria policy of Saudi Arabia has also changed, while the relations between Saudi Arabia and Israel have started to mature. According to MBZ and his pawn MBS, the Palestinian cause is a problem standing in the way of closer ties with Israel in order to establish a new order in the Middle East. That is why both MBS and MBZ are working hard to make Trump's so-called "Deal of the Century" possible between Israel and the Palestinians. According to U.S. officials, MBS said, "Israel has never attacked us, and we share a common enemy," referring to Iran several times, repeating the fictitious words of MBZ. However, they actually share some other common enemies. From the leaked emails of UAE Ambassador Yousef al Otaiba with high-level managers and experts in the pro-Israeli think tank, the Foundation for Defense of Democracies (FDD) to a walk-and-talk on the Arab streets, it is easy to see that the common problem for Israel and the UAE is not only Iran, but mostly Turkey, Qatar, the Muslim Brotherhood and others who don't see the Brotherhood as an enemy. From Libya to Syria, Iraq or Yemen, common people silently utter the name of "the Emiratis," blaming the country for all that happened following the Arab Spring. You can see their scared eyes when they talk about MBZ or Dahlan and understand that they fear the UAE even more than Israel. According to many people I talked to in those countries, Dahlan made deals with the old regimes, which were overthrown during the uprisings, to bring down al-Qaida-affiliated groups such as Daesh or the Nusra Front. Putting the blame on Turkey and Qatar for the spread of terror in the region, most likely the UAE cheated the whole world while it tried to get rid of the Islamists using al-Qaida-linked terror groups as a tool and funding them.

UAE-Turkey relations have always been a bit distant, but the UAE has been blatantly stepping up its anti-Turkey efforts – and not only its war of words. From the Gezi events in 2013, which had been depicted as the "Turkish Spring," to the July 15, 2016 coup attempt by the Gülenist Terror Group (FETÖ), Turkish authorities have come across traces of Mohammed Dahlan's, adviser to MBZ, influence. The UAE has funded anti-President Recep Tayyip Erdoğan groups, including the outlawed PKK, according to reports. Turkish Foreign Minister Mevlüt Çavuşoğlu was referring to the UAE when he said after the failed coup attempt: "We know that a country gave $3 billion in financial support to the coup attempt in Turkey." In fact, some UAE-based media openly declared their support for the coup.

When you look at the conflicts and crises in the Middle East and North Africa, it is clear the two countries stand on completely opposite sides. The gap between Turkey and the UAE started to widen with the overthrow of the first democratically elected president of Egypt, Mohammed Morsi, and continued in Syria. In North Africa, for instance, in Libya, the UAE established an Egypt-Emirati axis against the Turkish-Qatari axis by backing Gen. Khalifa Haftar and initiated a civil war after Moammar Gadhafi was toppled. From Somalia to the Sudanese Red Sea port of Suakin, it is almost impossible not to see the UAE's efforts to block the influence of Ankara. Maybe the UAE sees Turkey as a rival or more than that, a powerful country with a powerful leader that could spoil its regional new order plans with Israel. I sometimes wonder if it was the UAE that caused bad blood between the Barack Obama administration and Ankara just like it has been trying to completely destroy the relations between Ankara and Riyadh. Acting like this, the UAE looks like it is the leading Islamophobe in the world by causing rifts between the Muslim countries; but obviously MBZ doesn't care about this at all.

After Turkey arrested two spies linked to Dahlan last week, UAE trolls made a scene on social media alleging that Turkey is now detaining Gulf citizens, but no one bought that.

However, no one knows about the fate of Turkish businessman Mehmet Ali Öztürk, who was arrested and put into jail in Dubai when he attended a food trade fair in February 2018. Even though Turkish authorities closely follow the issue, neither them nor his family could get a proper answer on Öztürk's situation for months. The UAE hasn't let the Turkish Embassy staff in to see him. Öztürk is known for his humanitarian aid efforts for Syrian and Iraqi Turkmens, as he was the head of the Bayırbucak Turkmens aid society. Within months, he was accused of helping Syrians. He was also charged with supporting Ahrar-al Sham and the Nusra Front, which are baseless and not true. On Dec. 25, 2018, he was sentenced to life in prison. According to the lawyers who filed an appeal, Öztürk was tortured to speak against Erdoğan, Turkey and Qatar in front of cameras, and to confess their alleged relation to the Nusra Front. The last decision over the fate of Öztürk will be given on April 29. As we can understand from what happened to Öztürk, the UAE is not a safe and secure place for Turkish citizens anymore. Turkey has to closely follow suspicious UAE nationals, such as the spy ring that was arrested last week, to keep our country safe and secure.