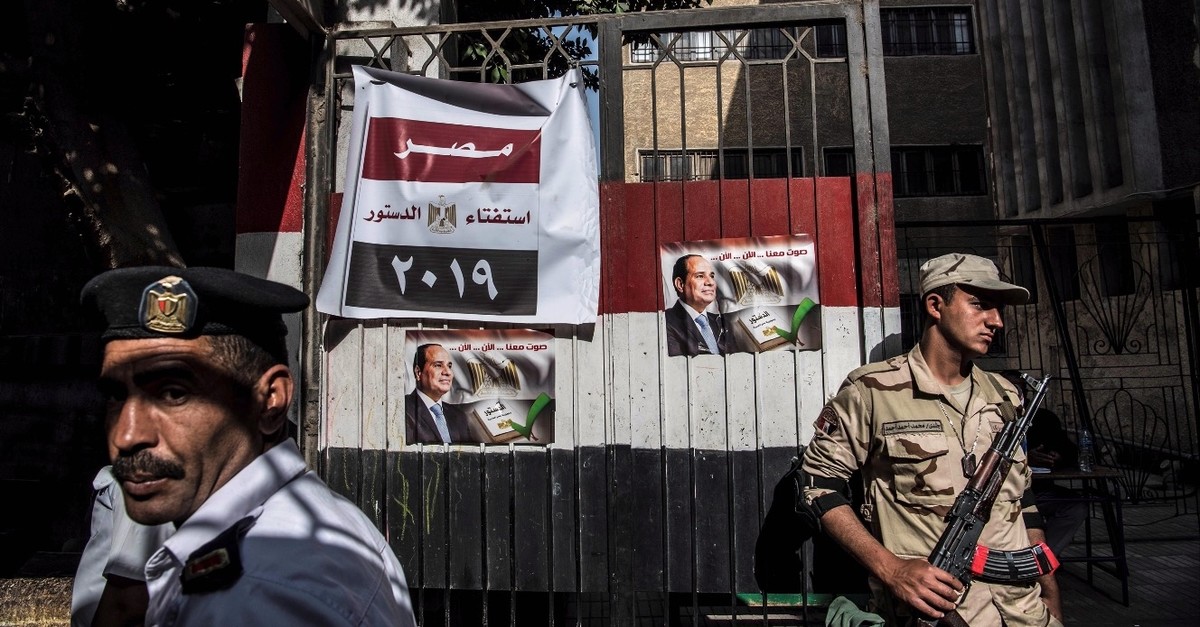 An Egyptian soldier and a policeman stand guard a polling station during the third day of a referendum on constitutional amendments in Cairo, April 22, 2019.
by Merve Şebnem Oruç Apr 26, 2019 12:04 am

In June 2014, one year after the bloody Egyptian military coup, the late King Abdullah of Saudi Arabia visited Cairo to welcome Egypt's new president Abdel-Fattah el-Sissi. It was not only a party for the presidency of el-Sissi but also a celebration for the first anniversary of the successful coup. The "father-and-son" photos of King Abdullah and el-Sissi had the feel of a father congratulating his son for his success and a son thanking his father for his generous support. Though it may not have been today, it was awkward then.

A day after King Abdullah's visit, a court in Minya confirmed 183 of the 683 provisional death sentences. It was farcical that the judge sentenced 683 people to death in an eight-minute trial in April, but the court was deadly serious.And a few days later, then-U.S. Secretary of State John Kerry visited Egypt and voiced strong support for the new president. Kerry, who defined the coup as "restoring democracy," heralded the release of $575 million in U.S. military aid and promised the delivery of 10 Apache helicopters.

So, all was well for Egypt's new pharaoh. The financiers were still backing him. Military aid was on the way, and the "terrorists" were getting what they deserved.

It has been almost six years since then-Gen. el-Sissi conducted the military coup. Mohamed Morsi, Egypt's first democratically elected president, had been in office for just over a year when el-Sissi overthrew his government and seized power.

It had all started with Tamarod, a group that was depicted as a new grassroots movement, of which it name means "revolt" in Arabic. In late June 2013, the group claimed that it collected more than 22 million signatures for a petition demanding Morsi step down.

The Muslim Brotherhood's Freedom and Justice Party (FJP) dismissed the claim, saying Tamarod had only collected 170,000. Massive anti-government and counter-Tamarod protests in Egypt's capital Cairo and other cities followed.

Rejecting any offers or dialogue with Morsi, Tamarod gave the president an ultimatum to resign or face a campaign of "complete civil disobedience." They urged "state institutions, including the army, the police and the judiciary, to clearly side with the popular will as represented by the crowds." Tamarod became quickly popular in the eyes of international mainstream media. The founders of the movement became instant celebrities and were on live TV almost every night, complaining about Morsi and his government. Opposition parties in Egypt also backed their campaign.

Today, we know from a long series of leaked audio recordings that appeared to capture meetings and phone calls between Egypt's senior defense officials revealed in 2015 that the United Arab Emirates (UAE) had given money to the Egyptian Defense Ministry to foment a protest campaign against Morsi. Accordingly, Tamarod leadership was drawing on a bank account administered by Egypt's generals and replenished by the UAE. As el-Sissi's junta quickly started to discredit and threaten Tamarod after the coup, some of the founders of the group, who were able to flee the country, have admitted that they were taking orders from the army. "What they did, they did in our names because we let them. The leaders of Tamarod let themselves be directed by others. They took orders from others," Moheb Doss, one of the founders of the group, said in an interview.

When crowds took to the streets on June 30, 2013, calling for Morsi to step down, Egypt's military and police were quick to proclaim that between 14 million and 30 million Egyptians were protesting Morsi. These numbers, which represent between 25 and 50 percent of Egypt's adult population, were simply impossible, but international mainstream media was quick to snatch up the figures without question.

On July 3, 2013, el-Sissi announced the overthrow of Morsi, along with the suspension of the Constitution and the appointment of an interim government, saying the military was responding to the people who had poured into the streets on June 30. He promised that he would not become involved in Egyptian politics after a military takeover.

However, next year on June 8, 2014, he was sworn in as the country's 17th president. The result of the presidential election was not a surprise given what el-Sissi had already displayed in the 11 months following the coup. He proved he was the new tyrant of Egypt and had no intention of leaving his position. He received 97 percent of the votes in the election that witnessed numerous empty ballot boxes, despite threats of large fines for non-voters and extended polling days. According to official figures, the turnout was around 47.5 percent, but many critics claimed that even that figure was inflated. Last year, he won the presidential elections for the second time, again with 97 percent of the votes. Voter turnout was at 41.5 percent, lower than that in 2014. The only other candidate was Mousa Mostafa Mousa, who was publicly known to be a strong supporter of el-Sissi.

Other than not being involved in Egypt's politics, el-Sissi had also promised freedom of speech, freedom of the press, democracy and social equality after the coup. He did not deliver on any of those promises either. He had portrayed himself as the savior of Egypt and promised that he would restore security, stability and improve the lives of the people of Egypt. But none of those proclamations came true either. Instead, thousands were killed. Tens of thousands, including journalists, were detained and arrested, while hundreds were sentenced to death in five-minute trials. Many Egyptians had to leave their homeland, whether they had opposed the coup or supported it, simply because they were labeled critics or dissidents. As part of a revenge plan of Egypt's old guard, the Muslim Brotherhood was crushed and banned. Public protests were restricted. Arguing against the coup or post-coup policies in the media was equated with disloyalty and treason. And six years after the military coup, Egypt is still suffering from insecurity, instability, a lack of democracy and a poor economy.

Nonetheless, some constitutional changes were approved in a referendum in Egypt this week, including one that could allow el-Sissi to stay in power until 2030. Some 88.8 percent of the voters endorsed the proposals, while the turnout was 44 percent. Accordingly, el-Sissi's second term has been extended from four to six years, and he will be able to seek one more term in 2024. The changes also expand the army's power to intervene in politics and provided el-Sissi with more power over the judiciary.

It is like the Arab Spring in reverse. Before the referendum, the authorities blocked more than 34,000 websites to restrict attempts to call Egyptians to rally against the amendments. Amnesty International, the London-based human rights organization, which barely uttered a word during and in the aftermath of the military coup, said that by approving the amendments, the parliamentarians had shown a "complete disregard for human rights."

Amnesty International is absolutely right. The constitutional changes in Egypt aim to increase the number of military trials for civilians, restrain the judiciary, help the guilty security forces get away with their violations of human rights and turn the country into an "open-air prison." Most probably, the wording used by the New York-based Human Rights Watch (HRW) is the best way to explain what those changes mean for Egypt: "institutionalizing authoritarianism." And yet, HRW was also almost silent during el-Sissi's bloody coup. Did they believe what Tamarod said then?

Some Syrians who managed to flee the bloody civil war once said to me, "If the Bashar Assad regime was like Hosni Mubarak, we would have thanked God." Now, Egyptians who escape from el-Sissi's regime say, "El-Sissi's Egypt is just like Assad's Syria."

I still cannot forget the celebrations, fireworks and laser shows in Tahrir Square in July 2013, which were organized by Tamarod to convince the world that what happened was not a coup but a revolution. I also cannot forget the images of burned bodies in Rabaa Square in August 2013, hundreds dead, shot by snipers, and the whole world's silence. It started in the summer of 2013. The bloodshed was televised live. And no one spoke up.

Western states did nothing but "just condemned" the coup in Egypt that summer. They chose to overlook the crackdown, the bloodshed and everything. They continued to do "business" with Cairo. We know that they will ignore what's happening today, as well. Of course, it is not the first time in recent history that democracy has been sacrificed for the regional ambitions of Western countries. But when we look at last couple of years, it is the first time they have done it so blatantly.