Venezuela, Libya, Syria all related to US sanctions on Iran 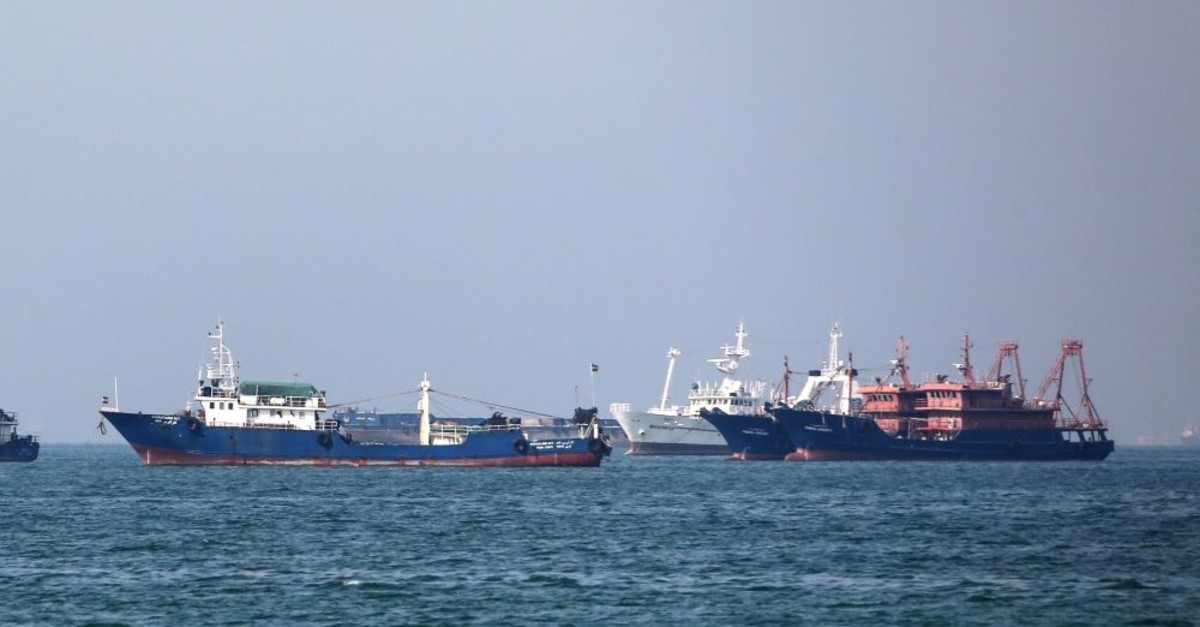 U.S. President Donald Trump has decided to deal a deathblow to Iran and to end Iran sanction waivers. The Trump administration introduced new sanctions on Iran's oil six months ago but allowed its eight biggest customers – China, Turkey, India, South Korea, Japan, Greece, Italy and Taiwan – to keep importing limited amounts. Waivers that have allowed these countries to continue to buy Iranian oil despite the U.S. sanctions expired this week. Ending the oil exemptions in question, Trump is aiming to bring Iran's oil exports down to zero.

Oil prices crashed midweek following news that U.S. crude oil inventories spiked, offering evidence that the oil market is not as tight as expected. However, oil prices went up to nearly six-month highs last week, and the drop in oil prices is unsustainable, and probably a surge in prices will follow, according to experts. In the first quarter of 2019, oil prices jumped about 30 percent this year, which is the strongest first quarter seen for decades. The oil market was estimated to shrink between 26 to 31 percent by the experts, even before Trump's announcement regarding the U.S. sanction waivers. After this week, the slump in the oil sector is expected to be even bigger.

That is why the U.S. is looking for ways to avoid shaking up the oil industry and keeping the market in balance without skyrocketing oil prices while punishing Iran. As it is known, Saudi Arabia is in Trump's pocket to boost its oil output if needed. Trump tweeted last week: "Spoke to Saudi Arabia and others about increasing the oil flow. All are in agreement." But in fact, Saudi Arabia relies on higher prices that are crucial to cover its domestic spending, as oil is its biggest source of revenue. So, Saudi Arabia's energy minister is seeking ways to change measurements of stock levels to justify maintaining the Organization of Petroleum Exporting Countries' (OPEC) limits of production. Today, Saudis may be celebrating the Iran sanctions, but ultimately they will pay for the consequences.

To maintain oil supply to replace Iran's production, U.S. officials are also urging Saudi Arabia and Kuwait, the second and 10th largest oil producers in the world, to resolve the dispute over the two countries' jointly held oil field located in a so-called neutral zone that lies on Kuwait's southern border with Saudi Arabia. Saudi Arabia and Kuwait produce roughly 15 million barrels per day. Although this number is impressive, it could have been even higher if the two Gulf Cooperation Council (GCC) members could reach an agreement on the exploitation of this zone.

The U.S. can tell the world it is seeking new oil sources to avoid hurting consumers but actually what the oil market fears is that Trump wants to control global oil production policy. When OPEC and major non-OPEC oil producers gathered in Vienna at the end of 2018 with the aim of reaching an accord to deliver a fresh round of supply cuts, energy experts revealed that the market's biggest fear was that Trump was controlling OPEC policy. Last week Trump once again called for an increase in crude output from OPEC, which jointly agreed to remove 1.2 million barrels a day to shore up prices.

On the other hand, tougher U.S. sanctions against Iran on top of increasing pressure on Venezuela are not helping the oil market. Venezuela's daily oil production plunged from 1.2 million barrels in December 2018 to 750,000 barrels in March. While the widespread blackout, the economic and political crisis and harsh U.S. sanctions have already crushed Venezuela's oil sector, the Trump administration's recent rush for a regime change in Venezuela and backing Juan Guaidó's anti-Maduro coup attempt can and most likely will backfire. However, Trump desperately needs Venezuela, a founding member of the OPEC and the eighth-largest oil exporter in the world, and its oil to succeed in its oil war against Iran.

The same story in Libya

It is actually the same when we look at Libya. In Libya, another major oil producer in the world, Khalifa Haftar, with the support of the U.S. president, once again fueled the ongoing civil war last month. A White House statement on April 19 said in the phone call with Haftar that Trump "recognized Field Marshal Haftar's significant role in fighting 'terrorism' and securing Libya's oil resources, and the two discussed a shared vision for Libya's transition to a stable, democratic political system." Haftar and his allies along with the U.S., the United Arab Emirates (UAE), Saudis and Egypt say that "extremist militias" control the Libyan capital, but the lawmakers loyal to Libya's U.N.-recognized government denounce Haftar's attack on Tripoli and defend Tripoli's record in fighting "terrorism." The U.N. has condemned Haftar's latest attacks on Tripoli, while Libya has asked the U.N. to investigate. As in Venezuela, Trump also needs Haftar to win and control the oil resources in Libya to not fail against Iran.

It is a hard game for Trump, but it is also very difficult for Iran as well. The initial U.S. sanctions in November made Iran's oil production go down from 4 million barrels per day (bpd) to nearly 3.4 million bpd in October. Even before the recent decision not to extend the waivers for the eight buyers of Iranian oil, Iran could sell no more than 1.3 million bpd. Now its oil exports are expected to drop even further, which means the deficit gap in the state budget this year will be larger than expected. Iran is taking measures to minimize the effect of the sanctions, but they will most likely be unsustainable and unlikely to work, as they do not address any of the major structural problems Iran's economy suffers from. Iranian President Hassan Rouhani planned for oil exports to be around 1.5 million bpd, sold at a price of $54 a barrel or above. However, if the Trump administration succeeds in bringing Iranian oil exports to zero, sales will definitely collapse, leaving Iran with a large financial gap.

Iranian Oil Minister Bijan Zangereh recently said the oil market needs Iran and added that Saudi Arabia and the UAE are not capable of supplying the world market on their own. "The extra capacities that Saudi Arabia and the UAE talk about are exaggerated. They overstate not only their oil capacities but the reserves as well," he said, and he is probably right. But of course, Iranians can't rely on that.

While we brace for a post-waiver era of total Iranian sanctions, here is the other question: What will the countries, which include several major economies, including China, Turkey and India, that kept importing oil from Iran until the U.S. ended sanction waivers this week do? We will see next week whether the U.S. threats will be carried out and how Turkey, China, India and other concerned parties will react if the Trump administration does so.

Turkish Presidential Spokesperson İbrahim Kalın was in New Delhi last week to have discussions with India's national security adviser, Ajit Doval, including the impact of the end of U.S. waivers for imports of Iranian oil since both Turkey and India are in the same boat. India has signaled it is gradually reducing its dependence on Iranian oil. Turkey, along with China, have, however, remained defiant until now.

"The Europeans have set up a mechanism for transaction and payment. We are looking at it now. We will see either if we can join or come up with a similar mechanism," Kalın told an Indian news portal. When asked whether India had expressed an inclination to join such a mechanism during his talk, he said, "No, I haven't heard that;" however he added, "But obviously they [the Indians] are not happy with the sanctions." He said, "While Turkey is looking at different options, it will continue to trade with Iran."

On the other hand, James Jeffrey, who serves as the U.S. special envoy for the Global Coalition to Defeat Daesh, and Washington's special envoy Joel Rayburn visited Turkey this week. Syria was at the heart of the talks; however, it is not hard to understand that the sanctions against Iran and Turkey's position were in the packed agenda of the U.S. representatives.

Last month, Iranian Foreign Minister Javad Zarif also paid an official visit to Ankara, and just a day before this visit, Zarif was in the Syrian capital Damascus where he met Syrian dictator Bashar Assad. "I had a long interview with Bashar Assad. I will be giving details of these discussions to Mr. Erdoğan," Zarif told reporters in translated comments before President Recep Tayyip Erdoğan received Zarif at the Presidential Complex where they had a closed-door meeting lasting over an hour. Again, one of the most crucial topics on the table was Syria, but there is no doubt that Iranian oil and the U.S. sanctions were widely discussed. Was there a bargain offer brought by Zarif? We don't know; however, no one can say that the two issues are not related.

Turkey stood by Iran during the Barack Obama administration's sanctions and helped Iran to sell its oil in line with U.N. rules and regulations. We don't know if Iran asked for such a smooth way from Turkey but remember when Turkey went head-to-head with the U.S. after being accused of selling Iranian oil in other currencies in the Halkbank case, the Rouhani administration didn't even pay attention. The Trump administration also needs Turkey to refrain from handing out favors to Iran to win its economic war against Tehran. If the U.S. continues to threaten Turkey over its S-400 purchase, with sanctions and other things, Turkey may help Iran once again, but only if Iran gives Turkey what it wants in Syria. That might put Turkey in a difficult position for a while but also Trump will lose his advantage against Tehran. But on the other hand, if the U.S. turns a new page with its NATO ally Turkey, stops attacking Ankara and agrees on many issues, including east of the Euphrates in Syria, then Turkey would decrease its oil purchases from Iran. But how can Ankara trust the U.S. now after all that has happened in the last six years? And the other question is: Are the latest attacks by the Syrian regime and its allies, Iran and Russia, related to this issue? I mean, are they also threatening Turkey with Idlib under the table?

Only time will show us what will happen next in this super-fast, multidimensional, intensely dangerous geopolitical game in which all actors keep pushing their own interests.