Who is disturbed by Turkey's presence on Sudan's Suakin island? 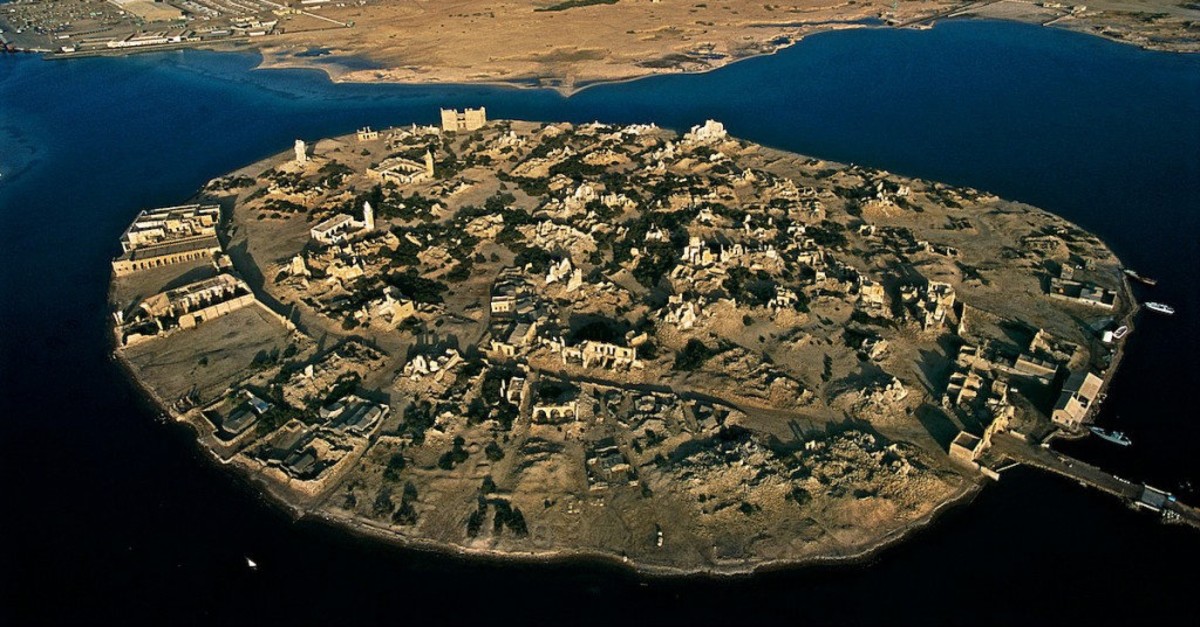 The aerial view of Suakin island, at the crossroads between the Aden Gulf and the Red Sea, Sudan.
by Merve Şebnem Oruç May 10, 2019 2:05 am

The anti-Turkey claims recently raised over Suakin island are directly related to the smear campaign of Riyadh, Cairo and Abu Dhabi, all of which are at odds with Ankara for its sole powerful democracy in the Middle East

Sudanese President Omar al-Bashir was forced from power last month in a military coup after three decades as the country's leader. Dozens of government officials including the prime minister and the head of the ruling National Congress Party, were also arrested with al-Bashir. The country's defense minister, Lt. Gen. Awad Mohamed Ahmed Ibn Auf said the military had toppled the regime and detained its head. "A military council has taken power and will rule Sudan for two years," he added. The constitution in Sudan has been suspended and the government and parliament has been dissolved. Elections are predicted to be held at the end of a "transitional period." A state of emergency is in place for three months and a curfew at night has been implemented. Sudan's airspace and borders are closed for 24 hours.

The removal of al-Bashir comes after weeks of anti-government protests, during which many people were arrested. But are the protesters happy with the military government? Definitely not. Economic problems brought many Sudanese pouring onto the streets but the Sudanese Professionals Association (SPA), a group of doctors, health workers and lawyers, led the demonstrations against al-Bashir, who has been wanted by the International Criminal Court (ICC) for war crimes in connection with the conflict in Sudan's Darfur province and the U.S. has repeatedly targeted his government with sanctions and airstrikes. Al-Bashir had come to power in 1989 in a military coup, amid a long civil war between Sudan's north and south. Some countries including Russia describe the overthrow of al-Bashir as an unconstitutional military coup.

Of course, al-Bashir's 30-year-long presidency cannot be compared with Egypt's first democratically elected President Mohamed Morsi's very short term; however, their overthrows carry some similar patterns. The SPA reminded me of Tamarod in Egypt, a group that was depicted as a new grassroots movement, of which the name meant "revolt" in Arabic. Tamarod led the anti-Morsi protests in mid-2013, became quickly very popular in the eyes of international media and invited the army to oust Morsi and the government. After the coup led by the then-defense minister and current president of Egypt, Abdel-Fattah el-Sissi, we learnt the United Arab Emirates (UAE) had given money to the Egyptian Defense Ministry to foment a protest campaign against Morsi. Accordingly, Tamarod's leadership was drawing on a bank account administered by Egypt's generals and replenished by the UAE. As el-Sissi's junta quickly started to discredit and threaten Tamarod after the coup, some of the founders of the group, who were able to flee the country, have admitted that they were taking orders from the army.

We don't know how the military, which still pretends as if the army stands side by side with the protesters, will react as the sit-ins against the two-year transition period, the state of emergency, the curfew and other measures continue. This question is quite important as the talks between the SPA and the military are getting more tense every day. The demonstrators have recently threatened to launch a nationwide civil disobedience campaign in reaction to the military's rejection for their proposals for an urgent civilian rule. Demonstrators believe that the military has had other ideas, and that is why it is delaying the transition to a civilian government. On the other hand, supporters of Omar al-Bashir, whose opinion has never been asked, are still watching what's going on. Will Sudan calm down or has the struggle just begun?

There were also some signs that some Arab states had a hand in the overthrow of al-Bashir, and this became more clear in the last few days. According to some sources, Egypt has been the very first state to list its demands from the transitional military council of Sudan. Cairo has asked the military council to hand over the leadership of the Muslim Brotherhood, which the Egyptian dictatorship sees as "terrorists" since the Egyptian coup against Morsi, who is affiliated with the group. The sources say that Cairo presented Khartoum a list of more than 400 people, including leaders, former parliamentarians and businessmen who have investments in Sudan. In addition to the Muslim Brotherhood file, Cairo said to Khartoum not to resume the border conflict between the two sides over the Halayeb Triangle.

However, the most interesting demand by Cairo from Khartoum was the suspension of the Suakin agreement signed with Ankara in 2017. The island of Suakin, located in the Red Sea in eastern Sudan, is the nearest Sudanese port to Saudi Arabia's Jeddah seaport. Under the agreement, Turkey is working on to rehabilitate and manage the port city. The deal is related to the Turkish International Cooperation and Development Agency's (TİKA) efforts to renovate historic buildings dating back to the Ottoman Empire.

As Daily Sabah reported, "aiming to turn the island into a major tourism center especially for Hajj-bound pilgrims, TİKA launched the restoration work in January 2018. Meanwhile in March, Sudan and Qatar also signed a $4-billion agreement to develop the port located in the city. At the time the deal was reached, it had already caused concerns in Saudi Arabia, Egypt and the UAE, over allegations that Turkey was seeking to expand its military foothold in Africa, in the Gulf and the Red Sea."

"Numerous reports had claimed then that Turkey will build a military base and naval facilities in Suakin, which will be the third spot in the region with Turkish military presence after Qatar, where some 120 Turkish soldiers are stationed, and Somalia's Mogadishu, which houses a significant Turkish base of 200 soldiers training Somali government forces. Ankara and Khartoum have repeatedly rejected that Ankara is planning military deployments on Suakin."

However, Cairo continues to carry the same thoughts. In return for the implementation of the Egyptian demands that I mentioned above, obviously ordered by the UAE and Saudi Arabia, the sources also say that Cairo has promised to provide unlimited political, economic and security support to the military council of Sudan and will help the army maintain power.

A UAE-funded website, Ahval News, managed by members of the Gülenist Terror Group (FETÖ), which was behind the coup attempt against President Recep Tayyip Erdoğan and the Justice and Development Party (AK Party) government, recently published at least three articles in less than one month about Sudan, Suakin island and Turkey.

The articles penned by different names repeatedly argued the same points: Turkey already opened a military base in Somalia and a similar one in Qatar, they alleged that Turkey had increased its military presence in Sudan's Suakin aiming to restore the glory of the Ottoman Empire and threatening the Red Sea region and the Gulf of Aden, which are a security priority for Egypt, Saudi Arabia and Israel. Accusing Erdoğan of using Sudan to put pressure on Saudi Arabia and Egypt, the writers of the articles claimed that Turkey should be ready to face setbacks after the overthrow of al-Bashir.

When asked about Sudan right after al-Bashir was ousted and arrested, Erdoğan said, "I'm not a politician who came to power in a coup. From my time as mayor to now, I am one who always came (to power) through the ballot box and while continuing this journey with the ballot box, I have dealt with a coup attempt." He expressed his hope that Sudan can overcome its upheaval peacefully through "national consensus" and urged it to try to operate "a normal democratic process," and repeated his disdain of undemocratic seizures of power. And yet, pro-Syrian dictator Bashar Assad as well as the UAE web site Al Monitor claimed in a recent article, "Erdoğan said Sudanese coup actually targeted Turkey."

We have seen some other articles and news reports on several anti-Erdoğan news portals alleging that the Sudanese transitional military council may reverse Sudan's policies with Turkey. But the the spokesperson of the Turkish Foreign Ministry Hami Aksoy said at the end of April that reports alleging that the deal between Turkey and Sudan for the reconstruction and restoration of the historic Suakin island on the Red Sea coast could be canceled do not reflect the truth. We will see if the anti-Erdoğan portal's words become true in the coming days. As it is known, Riyadh, Cairo and Abu Dhabi are at odds with Ankara over a host of regional issues such as their joint blockade against Qatar, their latest policy in favor of the U.S.-backed PKK offshoot the People's Protection Units (YPG) in Syria and their support for strongman Khalifa Haftar against Libya's U.N.-backed internationally recognized government. Turkey was the first to condemn the Egyptian military coup in 2013. Ties with Saudi Arabia have further been strained especially after journalist Jamal Khashoggi was murdered by a Saudi assassination squad at the kingdom's consulate in Istanbul in October 2018. Turkey is also openly critical of the UAE's role in the conflicts in the region, and recently two UAE spies were arrested in Istanbul, one of whom quickly hanged himself in his cell last week.

A trio of actors

The UAE, Saudi Arabia and Egypt are ruled by dictators and autocrats who crushed the people who called for democratic changes in their countries, but they are acting as if they are the flag-carriers of democracy in the Middle East. It is not a secret that this propaganda is due to the fact that they see the so-called Islamists as a threat to their thrones. They meddle in other countries internal and foreign policies and cannot stop themselves to act in line with their regional ambitions. The trio is known for their methods of using secret channels to reach out to other countries militaries to encourage them to remove their foes from power. They also fund some civilian groups in those countries directly or indirectly to portray the military coups as revolutions which came after people's demands. Most probably, it has been the same in Sudan, as they were not comfortable with al-Bashir's ties to Turkey and Qatar.

Since the successful overthrow of Omar al-Bashir, Egypt, as it heads the current session of the African Union (AU), put pressure on the union not to suspend Sudan. The UAE and the Saudis have provided aid worth $3 billion to support the military. In addition to that the UAE hosted Sudanese military and opposition groups for talks on the future of the country.

After all this, lets ask once again: Was it a civilian uprising? Or a military coup, which was staged by the UAE, Egypt and Saudi Arabia and used the civilians who are weary with the economical situation in Sudan as a tool? Was it just about the 30-year rule of Omar al-Bashir or did the trio manipulate the Sudanese to block Turkey in the region, and Qatar as well?