A new centurylong hell in the Middle East 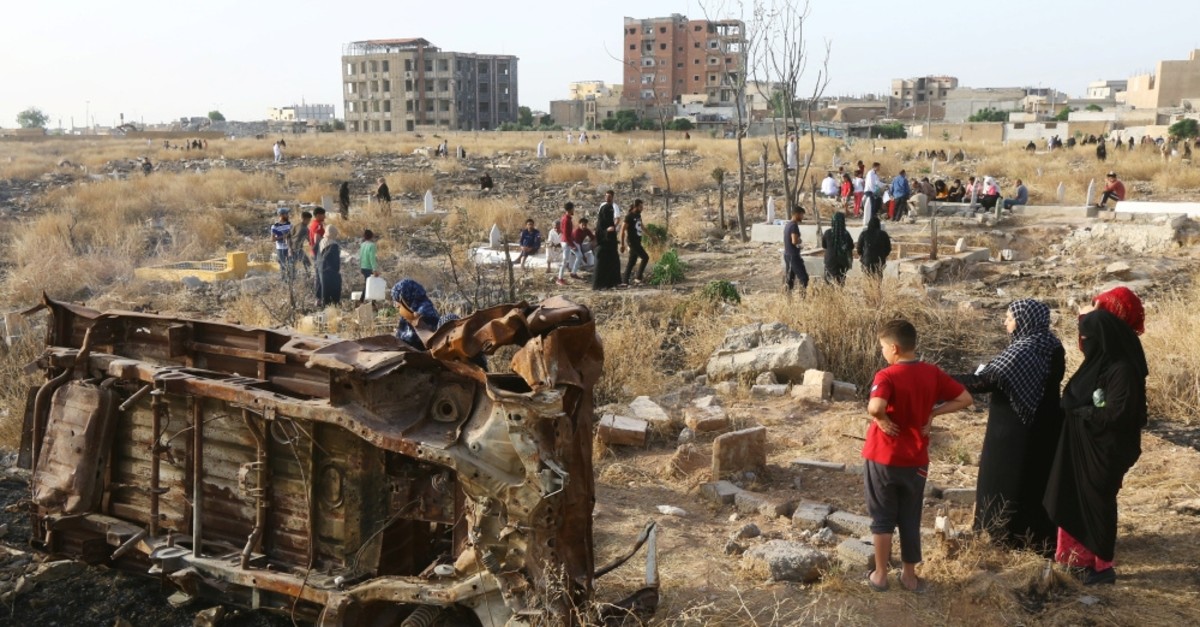 Drawing parallels between the bloody conflicts in Europe before Westphalia, the U.S. in cooperation with Israel devise a strategy to create a minority-based fragmented Middle East

Hostility between sects and ethnic groups in the Middle East has a longer history than is widely known. For instance, in Syria, since the early days of protests in the spring of 2011, which had yet to be torn apart by a bloody civil war and become a fruitful environment for terror groups to grow thanks to the Bashar al-Assad regime's brutality, sectarianism has been described as a characteristic of the conflict. But even before 2011, the split was already there, sleeping between the country's Sunni Muslim majority and the ruling minority Alawite sect, Syria's largest minority group.

Pre-Assad regime cabinets were mostly dominated by Sunnis in Syria, where around 75% of the population is Sunni. When Hafez al-Assad, father of Bashar, seized power via a coup in 1971 and became the unquestioned ruler of Syria, he implemented laws and policies to secure rights for minorities, specifically the Alawites over others and oppressed the Sunni majority. The rule of minority ideology reached its sharp end during the 1982 massacre when Hafez al-Assad tried to eliminate the Syrian wing of the Muslim Brotherhood, a transnational Sunni organization. Christians, on the other hand, were not as precious as Alawites but they were not like the Kurds, who weren't even treated as citizens until the Syrian uprising.

While the conflict in Syria was turning into a regional struggle, the sectarian and ethnic split continued to grow inside, and it included the other minorities in the country, including Palestinian refugees, Armenians, Kurds, Yazidis, Christians, Turkmens and Assyrians. In the first four years of the civil war, we saw many reports revealing that Christians supported the regime and its Shabihas, while Kurds split in two and supported either the opposition or the regime before the outlawed PKK was depicted as the representative of all Kurds in the Western media. Meanwhile, Palestinian refugees in Syria struggled a lot, some starved to death in the Yarmouk refugee camp simply because they supported the revolution.

Selective Tenderness of the West

As protection of minorities has always occupied the heart of the discourse in the Western world led by the U.S., instead of calling for freedom for all, the whole world watched the killings of hundreds of thousands of Sunnis even before Daesh emerged. Syria has been the right place to reconsider the concept of minority protection as well as political representation and equality for all people regardless of their affiliations, ethnicity or religion. But the "minority protection" proposition has put minorities in a status of the privileged, one that totally violates universal human rights. The equality of all Syrians and justice for all have never been addressed. Since that approach had a ground in the basis of the Western world, Assad's men widened the sectarian split and made the situation worse than ever, killed more and more Sunnis. Since everyone out of Syria has focused on Daesh's violence against minorities, Assad's massacres have been forgotten.

What has been the reason behind the U.S.-led Western states' ignorance? Is it that minorities are like an avant-garde interest or a hobby to them, which indulges in some "human rights activities" in their spare time? Do they treat minorities as if they are like endangered species, animals at risk of extinction to these people? But then, hasn't it made all the countless people who have been the majority and yet dying at the hands of the regime, regular animals to them? So would they be ignored? Until 2014, I thought it was so. Westerners do not care about all the people's rights, not only in Syria but also in the entire Middle East and have a special interest for minorities as if they were about to become extinct.

But as of 2014, many historians and policy makers in the West suddenly started to cite the 30 Years' War, which broke out in Europe during the mid-17th Century, as a parallel in their discussions about the Middle East. They claimed that the conflicts in the Middle East, including the occupation of Palestine, civil wars in Syria, Iraq and Yemen, revolutions and counterrevolutions, and all the chaos as well, resembled the separate but interconnected conflicts between the camp of the Pope and the Catholic Church on one side, and the camp of Martin Luther, John Calvin and the reformist Protestants on the other. That was not a totally wrong analogy actually, as the 30 Years' War was about religion and sects too.

The Rationale behind peacemaking

The term "Middle East" describes a geographical area, but it is often referred to as the "Arab World" because of its dominant population. In the Middle East, Arabs are the majority, and Sunni Islam is the dominant sect among the Arabs who believe in Islam. That makes a Middle Eastern minority as one that is not a Sunni Arab.

The U.S.' prior policy towards the Middle East since WWII has been to stop Sunni Arab states fighting against the state of Israel, which popped up in 1948, and construct a sustainable peace between Israel and the majority of the region, the Sunni Arabs. However, America's peacemaking reached a crossroads after years. Even though the prior enemy of the Sunni Arab states, such as Saudi Arabia or Egypt, has changed, as Iran replaced Israel for them as the biggest regional threat, they have still not been able to declare their secret relations with Israel. The reason has been that Sunni Arab societies' view has not changed although their rulers have changed their minds. Even though the U.S. succeeded in changing the kings or the princes of the Sunni Arab states' mind, the expected peace has yet to come.

Following failures again and again, the American approach has also changed. After a closer look at the region's demographics, they had a new idea: Sunni Arabs can be the majority in the Middle East, but they actually can be just a plurality. Thus, Middle Eastern minorities from Syrian Alawis, Turkish Alevis to Egyptian Copts or Kurds should come together to form the Middle East's new majority together. It was kind of the pre-WWI era again. But instead of Great Britain and France, this time, the U.S., which took their places after World War II, started to provide support to minority groups one by one to form new statelets in the region and seek stronger relations between them to outmaneuver Sunni Arab societies.

Just like the Americans, after its foundation step-by-step, the Israeli state realized that it could not keep fighting the war against the Sunni Arabs surrounding it as it was not easy and wise in the long run. Along with first Prime Minister of Israel David Ben Gurion's "Periphery Strategy," which aimed to have strong relationships with the states on the periphery of its enemies, Israel also started to have close ties with minorities in the region, such as the Druze in Lebanon, some of the Kurdish groups in Turkey, Iraq and Syria, and others. Surrounding the Sunni Arab states with its periphery strategy, while it has looked as if it was surrounded by them, Israel has also started to tear apart the region by supporting minorities to stand against the Sunni Arabs, sometimes directly, sometimes indirectly. Butchering regimes such as Bashar al Assad's Syria, Iran's growing dominance in the region and its proxies' violent methods eased both Israel's and the U.S.' plans, of course.

The Alliance of Minorities Strategy

If we go back to the analogy of U.S. policymakers between today's Middle East and Europe back then, it is not so hard to understand their strategy – to found an alliance among the minorities no matter what the consequences would be. The 30 Years' War that they have been talking about since 2014 was not only about religion, but also a political struggle just like today. It was bloody and devastating, there was hatred, there were interventions, and there were millions of refugees in Europe, as well.

Drawing a parallel between the then Europe and today's Middle East due to such similarities, foreign policy practitioners like Henry Kissinger, the former secretary of state of the U.S., one of the most controversial figures in U.S. politics, offered a solution to end the present conflicts: A new world order, or simply Westphalia 2.0. They brought up a model for the new world order exemplifying the Peace of Westphalia negotiated in Europe at the end of the 30 Years' War. Put simply, they said various Christian groups had been killing each other until they had understood that they had to live together, but in separate units. According to this theory, there had been no winner or loser due to this agreement; it had come after almost a quarter of the central European population had perished because of wars, disease and hunger. Comparing this with the contemporary world and in defense of the Westphalian peace, Kissinger said in his book "World Order" published in 2014, "A multiplicity of political units, none powerful enough to defeat all the others, many adhering to contradictory philosophies and internal practices, in search of neutral rules to regulate their conduct and mitigate conflict;" a defense based on "the necessity to come to an arrangement with each other, not on some sort of superior morality," bringing "a balance of power that we are missing today."

Kissinger, whose name is enough to make a non-American's blood run cold, once again has not missed a chance for a strategy that would eventually design the world in parallel with the U.S. and Israel's interests. He has simply avoided using the term Sykes-Picot, but what he has offered to Middle Easterners was exactly a Sykes-Picot 2.0 kind of fragmentation by using minority ethnic groups. He has deviously attempted to sweeten the horrible idea by giving Westphalia treaties as an example.

As a matter of fact, the Peace of Westphalia signed in 1648, did not bring peace throughout Europe, but provided a basis for national self-determination and a new system of political order in central Europe. The winner was nationalism, sovereignty and secularism. As Western influence spread across the globe, these principles formed the core of international law and the world order. With the Peace of Westphalia, nationalism defeated the Holy Roman Empire; however, in time, it paved the way for the Napoleonic Wars first and then two world wars, which devastated Europe for centuries and killed tens of millions. The need for dialogue followed by the necessity to be united and a European integration was accepted as an antidote to the untethered extreme nationalism, which had ruined the continent. Considering the analogy between today's Middle East and Europe in the mid-17th century, then we should be careful about the aftermath of the U.S. strategy for a permanent solution. Since nothing has changed in the U.S. approach after U.S. President Donald Trump came to office, we should be more careful as he has a habit to rush by not thinking about the results, risks and possibilities.

If the "alliance of minorities" strategy works, a new fragmentation in the Middle East can bring a whole new level of regional wars for the sake of ensuring a peace that will secure only Israel's interests. Then it might even be the starting point of another world war in such a globalized world as happened in Europe. Sectarianism is unfortunately the sickness of the Middle East. But the cure for this sickness is not in the new states, statelets and new borderlines as the U.S. and Israel want. That would only help Israel's desires. But also, it can unleash another centurylong hell.