As Ankara and Moscow arm wrestle, what's next for Idlib? 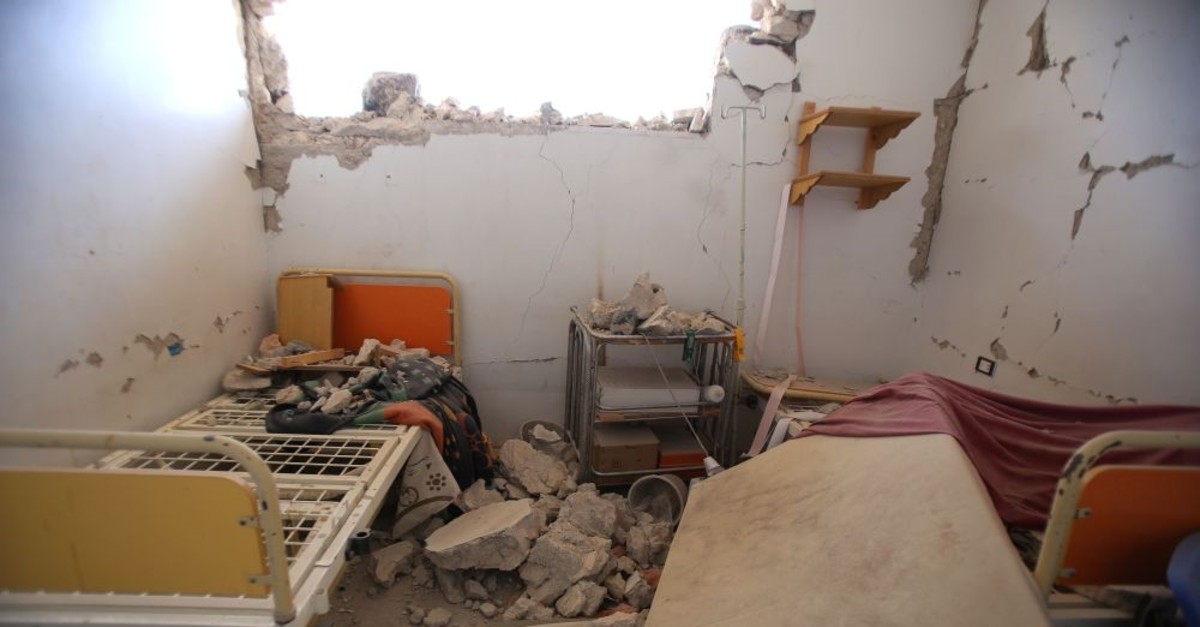 A damaged interior after a regime airstrike on a makeshift health clinic near Tallmannis in Syria's northern Idlib province, Aug. 21, 2019.
by Merve Şebnem Oruç Aug 22, 2019 12:57 am

The Turkish Defense Ministry released a statement strongly condemning the attack "that contradicts the existing agreements, cooperation and dialogue with the Russian Federation," adding, "In the face of these ongoing operations in violation of all memorandums and agreements threatening the supply route to Turkish Observation Point No. 9, deployment of our forces was started on Aug. 19, 2019 at 5:30 a.m., with advance information supplied to the Russian Federation, to keep the supply routes open, to ensure the safety of our observation post and to prevent further loss of civilian/innocent lives in the region."

"An airstrike was launched on a Turkish convoy at 8:55 a.m., and it caused three civilians to lose their lives and left 12 civilians wounded."

Holding Russia responsible for the attacks of the Syrian regime forces implicitly and accusing regime forces of violating existing deals with Moscow, which were signed to save civilians lives and to avoid another humanitarian tragedy in Syria, Turkey did not explicitly say who carried out the airstrike.

However, stating that Turkey reserves its right to retaliate, Ankara gave a message to Moscow: Turkey will continue to back Syrian opposition forces and will not hesitate, no matter what, to stop another refugee influx to Turkish borders.

Turkish Observation Point No. 9 is in Morek, close to Khan Sheikhoun, a city in southern Idlib, which is strategically important along with Morek, as both are on the M5 highway that is the main north-south artery of Syria. It runs through the main Syrian cities of Aleppo, Hama, Homs and Damascus. Before the war, all transit traffic between Turkey and the Gulf countries ran along this road, which also connects Gaziantep province in Turkey to Amman in Jordan.

Turkey has 12 observation posts along the Idlib border under the Sochi agreement, which was reached between Ankara and Moscow on Sept. 18, 2018. President Recep Tayyip Erdoğan and his counterpart Vladimir Putin agreed to establish a demilitarized zone through the border of Idlib province that would be around 15-20 kilometers wide.

Despite an agreement to prevent more aggression, the Syrian regime hasn't stopped attacking southern Idlib, escalating violence gradually since the end of last year. However, recent attacks have increasingly reached a worrying level.

In addition, Monday's airstrike was not the first targeting Turkish military or official personnel in Idlib. On June 27, the Syrian regime hit an area located near a Turkish observation post in Idlib twice in two hours. Regime forces attacked the 10th observation post in the Zawiya region with artillery and mortar fire. One Turkish soldier was killed, and three others were wounded during the shelling.

It was the sixth such attack near a Turkish observation post, in addition to those reported on April 29, May 4, May 12, May 31 and June 8.

As a guarantor state for the Assad regime, Russia is the one and only country that can prevent the regime and Iran-backed militia attacks, but Russia's position in Syria has been fluctuating for a while.

The Syrian regime was expecting Russian support for a long time for its assaults in Idlib, where over 3 million civilians are stranded, since taking control of the province would be a victory for Bashar Assad. It was obvious that that kind of support would jeopardize the Sochi deal, which lashed both the Syrian regime and its other supporter Iran into fury.

The Russian support that the Syrian regime waited for since last summer materialized in the last few months. Russia wants the Assad regime to control Idlib and the northeast. However, that hasn't meant that the Russian president was eager to do so militarily – until now.

Moscow's stance started to change in mid-spring. "There's a limit to everything. The situation in Idlib and other areas where terrorists are still active cannot go on like this forever. We will proceed from the fact that the Syrian government has every right to ensure the safety of its people in its territory," Russian Foreign Minister Sergey Lavrov said at a press conference on April 29.

He indicated that the remaining members of Daesh and Hayat Tahrir al-Sham (HTS), previously named Jabhat al-Nusra before the group cut its links to al-Qaida, continue to stage provocations and are reluctant to abide by cease-fire agreements. "This is what is going on in the Idlib de-escalation zone," Lavrov said.

The Sochi agreement on Idlib gave Moscow a chance to play a new level of foreign policy game with Ankara disturbing Turkey's NATO allies. This deal brought Moscow and Ankara closer than before on different matters, such as the S-400 deal and TurkStream and other bilateral and military cooperation.

However, starting in May, Idlib became an area where Russia and Turkey arm wrestle although they continue to work together on other issues. Ever since, Russia has pushed Turkey to implement the Sochi deal immediately in Idlib.

On May 6, Assad regime forces, backed by Russian airstrikes, attacked the Ghab Plains, including hospitals, while the ground operation was carried out by pro-Russian regime forces, such as the Tiger Forces, the 5th Corps, et cetera.

I have always thought Iran would back any Idlib attack that the regime would launch. I was wrong. This was the first operation that made Russia's position clear. In response, Turkey supplied anti-tank and grad missiles to opposition groups for use against regime attack, and made it clear that it would protect its interests in Syria.

As I said, it was obvious that implementing the Sochi deal and removing terrorist elements would not be easy. The population of Idlib province has reached almost 3 million with Syrians fleeing bloody clashes and bombings in Aleppo, Hama and Homs, which is why the Turkish military has avoided using its firepower.

HTS terrorists began making statements against the presence of the Turkish-backed Free Syrian Army (FSA) in Idlib even before the launch of the de-escalation zone operation on Oct. 11, 2017, which was part of an agreement reached between Ankara, Moscow and Tehran during the sixth round of the Astana talks in Kazakhstan in September 2017.

Actually, even before the operation in question, which started the establishment of observation posts, Turkey had already been getting results with regards to eliminating extremist groups inside Idlib. Avoiding internal clashes, which would risk the lives of civilians, Turkey has been pressuring mainstream opposition groups to join forces and challenge the HTS and others.

During the winter of 2016-17, more than 10 FSA factions merged under the National Liberation Front (NLF) and started to act together with several other opposition groups.

By uniting all these groups, Turkey pushed them to confront the HTS, which was already unpopular among Idlib's civilians. The NLF started to get results, repelling the HTS. They took control of many critical points, including highly populated towns in the province. The HTS withdrew – mostly to western parts of Idlib. It was losing power and influence in the region and was reportedly considering dissolving.

The regime's attacks, however, helped the HTS and al-Qaida linked groups regain power to retake control of positions it had lost. Since the Assad regime's attacks on Idlib started in the summer of 2018, the internal situation in Idlib began to change as well.

At the beginning of this year, the HTS launched new campaigns against the most effective opposition groups in Idlib, such as the Nureddin Zengi Movement, and consolidated its control in the region and found ground for its propaganda. Since Syrian opposition groups have had to face Syrian regime attacks, the HTS has become the dominant power once again in the region, targeting Turkish-backed factions.

In other words, the HTS has moved ahead of the opposition groups inside Idlib because of the Syrian regime's wide-scale operations violating the Sochi deal and the Astana process. This has never been a problem for the Syrian regime.

On the contrary, it is a plus as Damascus sees all opposition groups as terrorists; so it was great to again put them into one basket with the extremists and increase its anti-propaganda.

Since May, anti-HTS groups have started to regain power thanks to Turkey's reinforcements. While opposition fighters managed to maintain the front line against the regime, this month a Turkish-backed FSA faction, the National Army, entered the region that the HTS was controlling.

That change has shown Turkey's role. Turkey is not only the most crucial game changer in the fight against extremist groups but also a military power that can block the regime's advance by supporting the opposition.

At the end of the day, the arm wrestling with Russia and hinting on the potential costs of a wide-scale military operation to Moscow, it looks like Turkey is eyeing an adjustment to the Sochi deal to eliminate extremist groups and avert a humanitarian crisis.

Otherwise, Turkey would already have taken military action itself to avoid a devastating regime offensive, which would cause thousands of deaths and at least 1 million people being displaced. So, the question is, "What will Russia do?" as the Kremlin has tried to push Ankara into the corner but couldn't get the results it's been seeking.

Russia is also pressured by the regime and Iran as they allege that Turkey has failed to implement the terms of the Sochi deal. In addition, regime forces cannot advance, as they want due to the resistance of groups backed by Turkey.

As for the regime, the northern Hama and southern Idlib campaign has not given the expected results and its losses have been huge. The opposition, backed by Turkey, gained steam and with the National Army making successful counterattacks they have least shown they will not surrender even though the civilians inside Idlib are exhausted and scared.

Thus, the Russian military and regime forces may change plans and carpet bomb Idlib as they did Hama, Homs, Aleppo and other cities, causing a new refugee influx, which has already started even if slowly.

Of course, threatening Turkey with torpedoing Idlib would put maximum pressure on Ankara and put Turkish observation posts at huge risk, as the regime desperately needs to seize control of the M4 and M5 highways. That would make Russia the one that broke the Sochi demilitarized deal and the Astana de-escalation zone agreement. Will the Kremlin jeopardize such progress?

Many people have already compared the war in Syria to a video game where the virtual characters kill each other in cold blood; only the figures are real and alive in Syria, and there are too many civilians who have lost their lives already.

It was so tragic and inexpressibly sad to hear the popular video game "Call of Duty" narrative designer Taylor Kurosaki saying, "We are inspired heavily by some of the events in Iraq and in Syria," when he talked about the game's next release "Call of Duty: Modern Warfare" recently. Unfortunately, everyone plays their own game in Syria, and we still don't know when or if it is going to end.

To avoid such bloody scenes, this time Russia has a new opportunity: The Kremlin can sit at the table with Turkey for adjustments regarding the Sochi deal; that is, only if the Kremlin cares about the Astana process and the Sochi deal.