Turkey's front line in the south 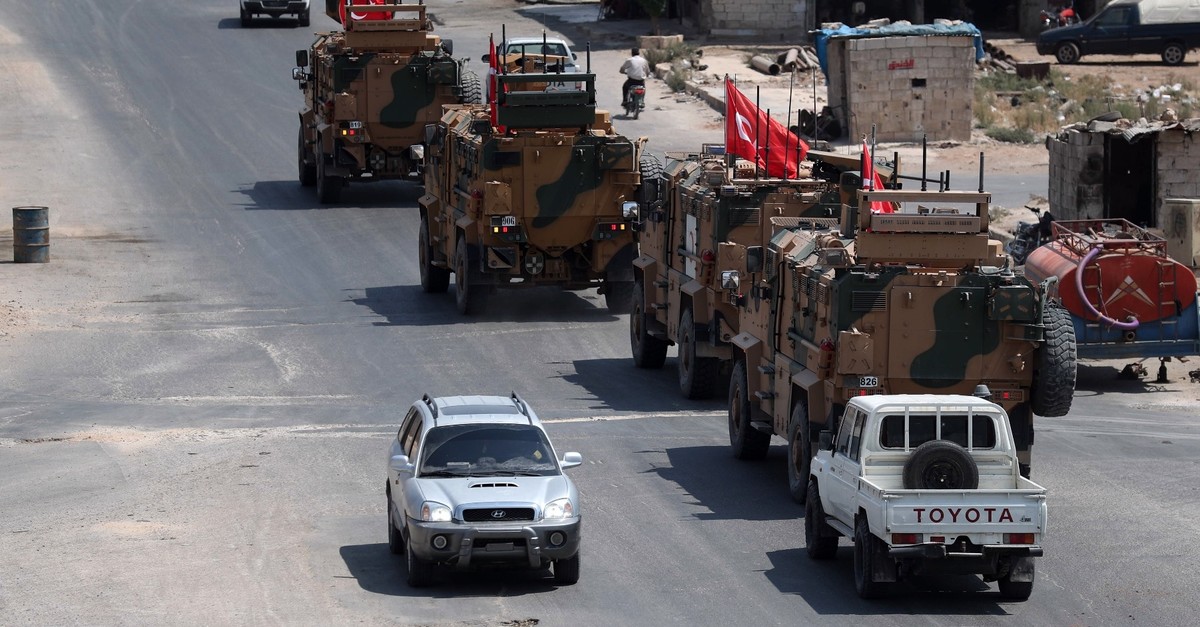 Turkey's fight against the PKK will be the most important topic as long as the terror organization's presence threatens Turkey. Turkey will likely maintain and further enhance its military operations in Iraq and Syria against the PKK

Turkey is located in a region where there are several conflicts and major disputes; terrorism in the Middle East, civil wars, proxy fights, conflicts at sea and energy disputes put Turkey in the middle of these hot spots. In particular, national security threats from the south of Turkey have increased in the last couple of years.

In short, Turkey is fighting in several locations in various ways by taking military, strategic or diplomatic action to minimize threats. Major national security problems due to matters outside of Turkey are rooted in Syria, Iraq and the Eastern Mediterranean Sea.

The outlawed PKK's Syrian branch, the People's Protection Units' (YPG), presence in northeastern Syria is one of the leading national security threats for Turkey. When the YPG carried weapons supplied by the U.S. to fight Daesh to Turkey via tunnels, the PKK resumed its terror inside Turkey. That was the major reason for Turkey's changing priorities and strategy in the region.

Following Operation Euphrates Shield against Daesh in 2016 and Operation Olive Branch against the YPG in Afrin in 2018, President Recep Tayyip Erdoğan said that Turkey would launch an operation to cleanse northern Syria of the YPG no matter what the consequences.

Two days after Erdoğan's last warning on Aug. 4 about a pending Turkish intervention, Turkish and American military delegations sat at the table to bring an end to the conflict. After negotiations, they agreed on Aug. 7 to establish a joint operation center for northern Syria.

They gave us little details about what kind of road map was agreed upon, such as the size of the safe zone. Turkey is determined that the depth of the security zone in northern Syria be 30-40 kilometers.

Ankara also insists that the U.S. should seize weapons given to YPG terrorists. Besides, the zone in question has to be 460 kilometers long along the Syrian border with Turkey. We don't know if the U.S. has accepted these demands yet. In addition, we don't know if the city of Manbij, still controlled by Democratic Union Party (PYD) and YPG terrorists, is part of the agreement; yet, there is a new stage in front of us.

Following a delegation of six members of U.S. military personnel arriving in the district of Akçakale in Şanlıurfa province on the Syrian border along with 90 U.S. personnel this month to work on the joint operation center to be established, Turkey started operating drones in northern Syria where Washington and Ankara agreed to establish a peace corridor.

Defense Minister Hulusi Akar announced last week that the joint operation center, which will help coordinate the establishment of the safe zone, is now fully operational. But Ankara does not completely trust the U.S. after so many broken promises in Syria; that is why it will not allow any delay concerning the plan they agreed on.

Erdoğan said on Thursday that Ankara would not accept foot-dragging, comparing it to the earlier deal with Washington to remove the YPG from Manbij.

The worrying situation in Idlib

Civilians in these areas had to flee to cities close to the Turkish border, especially those in Idlib province. Continuing violations by the Assad regime and its allies and radical groups inside Idlib are major risks in Idlib, and there is a big possibility of a new refugee crisis, which makes the situation in the province another national security problem for Turkey.

Russian, Iranian, and Turkish observation points around Idlib are the main guarantee for the ceasefire. Turkey has 12 observation posts along the Idlib border under the Astana deal. Other than that, Erdoğan and his Russian counterpart Vladimir Putin agreed to establish a demilitarized zone along the border of Idlib that would be around 15-20 kilometers wide on Sept. 18, 2018.

Recently, Turkish observation points were targeted by the Syrian regime. As the leading guarantor state for the Assad regime, Russia is the one and only country that can prevent the regime and Iran-backed militia attacks, but Russia's position in Syria has been fluctuating for a while.

Starting in May, Idlib became an area where Russia and Turkey arm wrestle although they continue to work together on other issues. Turkey is not stepping back from the terms of the Sochi deal and the Astana process, but also responding to Russia's active support to the regime by giving support to opposition forces.

It was obvious that implementing the Sochi deal and removing terrorist elements in Idlib would not be easy. Actually, even before the Astana process, Turkey had already been getting results with regards to eliminating extremist groups inside Idlib.

Avoiding internal clashes, which would risk the lives of civilians, Turkey has been pressuring mainstream opposition groups to join forces and challenge the Hayat Tahrir-al Sham (HTS) and others. By uniting opposition groups, Turkey pushed them to confront the HTS. They started to get results, repelling the HTS.

The regime's attacks, however, helped the HTS and al-Qaida linked groups retake control of positions it had lost. Since the Assad regime's attacks on Idlib started in the summer of 2018, the internal situation in Idlib began to change as well.

As Syrian opposition groups have had to face Syrian regime attacks, the HTS has become the dominant power once again in the region, targeting Turkish-backed factions. This has never been a problem for the Syrian regime.

On the contrary, it is a plus as Damascus sees all opposition groups as terrorists; so it was great to again put them into one basket with the extremists and increase its propaganda. Since May, anti-HTS groups have started to regain power thanks to Turkey's reinforcements.

At the end of the day, the arm wrestling with Russia and hinting on the potential costs of a wide-scale military operation to Moscow, it looks like Turkey is eyeing an adjustment to the Sochi deal to eliminate extremist groups and avert a humanitarian crisis. So, the question is, "What will Russia do?" as the Kremlin has tried to push Ankara into the corner but couldn't get the results it's been seeking.

PKK in Iraq and inside Turkey

As I said, Ankara has changed its priorities and strategies due to the increase of regional threats. So far, the policy shift, especially the fight against terror organizations has been significant. Turkey's fight against the PKK was shaped by new tactical and operational strategies on the ground. Preventing PKK terrorist attacks and blocking their main resources have become the leading step.

Turkey's airstrikes and ground operations in Iraq and inside Turkey increased by about 200% in the last two years. Turkish security forces made more than 100,000 operations against the PKK, during which hundreds of PKK terrorists were eliminated. Cross-border operations in northern Iraq, such as the Qandil mountain region as well as locations that harbor the PKK leadership have succeeded.

According to reports, Turkey prevented more than 500 terrorist acts in 2018-19, while the PKK conducted 194 terrorist attacks in 2017. One of the most serious results of the counter-terrorism operations is that Turkish security forces neutralized around 150 senior terrorists on Turkey's Most Wanted Terrorists list, a SETA report revealed.

The PKK's existence in Turkey, Syria and northern Iraq will remain the leading national security problem for Turkey unless the group lays down its arms and/or dissolves itself.

Another dispute over natural gas resources in the Eastern Mediterranean is ongoing. It's been nine years since a huge natural gas field was discovered off the shores of Israel's Haifa Port, namely the Leviathan Field.

On the other hand, other fields have been found in the same basin, such as the Aphrodite field near Cyprus. Of course, these developments are appetizing for Greece as well as the Greek Cypriot administration.

But the gas in question is being disputed and further exploration has been frozen, as there isn't an export route except via Turkey for an enormous amount of gas in which the volume far exceeds the domestic needs of the countries involved.

According to last year's reports, Israel, Greek Cyprus, Greece and Italy reached agreements to lay a pipeline connecting Israel's gas reserves to the three countries in a major project, namely the East Med that will supply gas from the Eastern Mediterranean to Europe.

Europe, too, has an interest in seeing the development of the East Med proceed, which would enable it to diversify its energy suppliers and reduce its dependence on Russian gas. However, the construction cost of East Med, according to initial estimates, is $7 billion.

Nicosia is also pushing to link the pipeline through the Aphrodite field to a liquefied natural gas (LNG) facility in Egypt, which will also cost around $1 billion. And we have to note that the EU is expected to finance such a major project. Although it is supported by Greek and Italian governments, which are both known to be very critical of Brussels, the cost is quite high.

As Greek and Greek Cypriot news outlets have been warmongering for a while against Ankara since Turkey has its own drilling activities in the Eastern Mediterranean, which is a right for Turkey and also the Turkish Republic of Northern Cyprus.

Turkey's fight against the PKK will be the most important topic as long as the terror organization's presence threatens Turkey. Turkey will likely maintain and further enhance its military operations in Iraq and Syria against the PKK.

In Idlib, Turkey will continue to take military action to stop a devastating regime offensive, which would cause thousands of deaths and at least 1 million people to be displaced. So, the question is, "What will Russia do?" To avoid more bloody scenes in Syria, the Kremlin can sit at the table with Turkey and discuss adjustments regarding the Sochi deal; that is, only if the Kremlin cares about the Astana process and the Sochi deal. Let's hope Erdoğan's visit to Moscow this week is a start.

As for the East Med, we can expect the hostilities to continue, but it is unlikely that an actual war will erupt. Turkey and Greece have never had an actual war since the 1920s. Greece cannot afford such a war, and Turkey doesn't want any more violence after all that has happened in the Middle East, especially in Syria. For now the possible scenario is continuous small-scale military operations in and around the Eastern Mediterranean.