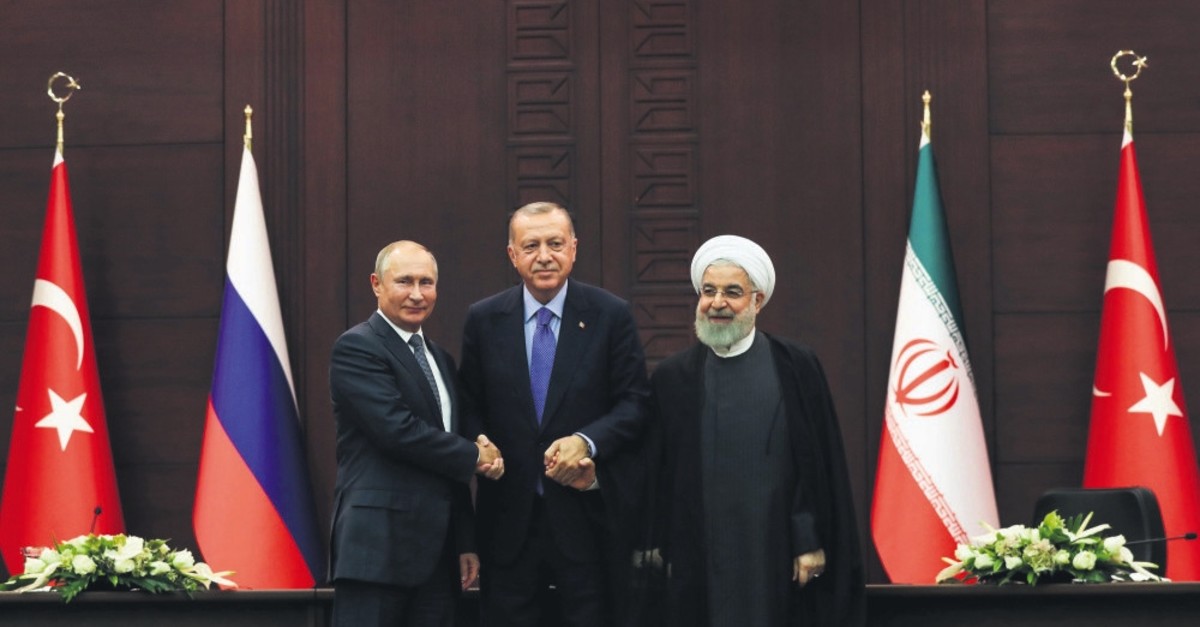 The statement by Turkey, Russia and Iran suggests that the three sides want to leave behind their disagreements in Syria and start with the constitutional committee, even though it is a remote possibility

The presidents of Turkey, Russia and Iran, the three countries that are the guarantors of the Astana process, met in Ankara on Monday to discuss the civil war in Syria. The statements of the countries revealed that the trio tried to reach a solution to resolve the conflict.

President Recep Tayyip Erdoğan and his counterparts President Vladimir Putin of Russia and President Hassan Rouhani of Iran agreed that the Syrian crisis could only be solved through a political process. We will see if the parties of the Astana process will be able to implement this, or at least come close to it. Even though we suggest that they succeed, we cannot be sure that it will change the situation on the ground.

I mean, as Russia and Iran back the Syrian regime and Turkey supports the Syrian opposition, Damascus might get the majority while the constitution is penned and that would make Bashar Assad the winner of the Syrian civil war on paper, even if he will not be a complete victor on the ground. Let's hope that it won't legitimize the killings in Damascus and help Assad escape his fate of being judged for his war crimes.

While the Astana process, along with the Sochi agreement reached by Putin and Erdoğan over the situation in Idlib, is the only platform that gives positive results on the ground with regards to decreasing violence and bloodshed, it did not stop the fighting and was not able to help the three countries change their position and come closer.

Since the beginning of 2019 their differences have increased. For instance, Ankara sees the outlawed PKK's Syrian branch, the People's Protection Units (YPG), as the leading threat to Turkey's security and has tried to find a solution with Washington concerning the area east of the Euphrates where the YPG presence is secured by U.S. troops. Turkey and the U.S. reached a deal last month; however, Ankara does not trust the U.S. completely and is determined to unilaterally intervene in the region to neutralize the terrorist elements along its border and create a safe zone for Syrian refugees if the U.S. drags its feet.

On the other hand, the Russians, and especially the Iranians, are annoyed with the U.S. presence in Syria, but they don't care about the PKK's threat to Turkey. Even in the press conference for the meeting in Ankara, only President Erdoğan spoke about the PKK's existence, showing the latest Jarablus attack as an example, but Russia and Iran did not say a word about it. In fact, Turkey is the only country that speaks about the PKK-controlled area in Syria; neither Russia nor Iran or Syria sees the huge divided land in the war-torn country as a problem. This attitude contradicts the promise by the trio over the unity and integrity of Syria and gives us a hint about what that they might be comfortable with, namely autonomous territory controlled by the YPG.

Iran is the country completely against the U.S. presence in Syria, as Iran's Islamic Revolutionary Guard Corps-led militias and its facilities are directly targeted by the U.S. and its allies. Recently, the Saudi media claimed that Saudi jets might have taken part in the airstrikes that hit Iran-backed militia positions in eastern Syria this week. It would not be a surprise after the recent Saudi Aramco attacks, which were carried out by Iran according to the U.S. and Saudi Arabia. The Saudis said this week that 18 drones as well as seven cruise missiles, which are all operated by Iran, were used during the Aramco attacks, and in addition, all of them came from the north, meaning that they were not coming from Yemen as initially thought. So we can expect more Saudi military involvement toward Syria following Israel's nonstop airstrikes.

Since Iran is now busy with attacks on its forces and positions, it has left Idlib to the Russians and has not been a part of the campaign directly – yet. But we know that they are frustrated with this as there is a hidden rivalry between the Iranians and Russians in Syria. Even Assad's own forces have been split in two, divided between pro-Iran forces and pro-Russia forces. Recently, the tensions between the Assad brigades show the growing conflicts between Iran-backed and Russia-backed forces on the ground. According to some sources, several bloody fights have taken place, such as the highly interesting one that happened in January in Sahel al-Ghab in Hama amid Russian-backed and Iranian-backed groups fighting over areas of influence and using heavy weapons.

Reports claimed that the Fourth Division supported by Iran refused to hand over areas under its control to the Fifth Corps and Eighth Division led by Suheil al-Hassan and backed by Russia, and the fight in question extended to checkpoints controlled by a group headed by Maher Assad. The clashes killed dozens on both sides.

In addition, Russia has started increasing its political influence over Damascus by controlling minister-level decision makers. In July, the head of the National Security Bureau and four of Syria's intelligence directors were replaced in line with Russia's demands.

It is obvious that Putin has a plan in Syria. I think he wants to rebuild Syria, and he doesn't want to carry Assad as a burden on his shoulders at the end of the day. He also wants to show that Russia can bring stability to a war-torn country in the Middle East where the Americans could never succeed. But the main issue is to build a security force for the future of Syria, as the Baath regime has lost too many people during the civil war.

That said, Iran has also lost too many soldiers and even commanders as well as militias in Syria, while they have been fighting for control of the devastated country. That is why it doesn't want to give all control to Russia. Tehran has also shown us many times that it will not leave, backing Assad till the end.

During the Astana meeting this week, Putin joked about selling defense systems to Riyadh following attacks on Saudi oil facilities. It was not only making fun of U.S. defense systems but also showing that he doesn't care much about the Riyadh-Tehran hostility. Of course, the Russians will not let the U.S. or others directly attack Iran, and the rivalry between Tehran and Moscow in Syria will not turn into hostility; but Putin can be serious about selling weapons to the Saudis if they are interested in it, even though he made Rouhani laugh at his joke.

WHAT IS THE DIFFERENCE?

If we look at the differences between Ankara and Moscow, it does look like the Russians are comfortable with the PKK's Syrian wing's presence in Syria. Even the Assad regime does not say a word about the YPG east of the Euphrates, so why would Russia? They are only against the U.S. troops in Syria and waiting for President Donald Trump to keep his word and withdraw American forces from Syria. However, it will not happen, as the U.S. will not leave Syria completely. As there is now a deal between Ankara and Washington regarding the area east of the Euphrates and they have founded a joint operation center to coordinate, so the U.S. will not go any time soon.

But, of course, the most important topic on the table was Idlib. The final statement by the leaders called for trilateral cooperation in fighting terrorist groups such as the Hayat Tahrir al-Sham (HTS) and Huras al-Din, while the U.S. focuses on Idlib. The other joint promise was to take steps to protect civilians in the area.

Despite a cease-fire agreed at the end of August, it did not work as artillery attacks and air raids by the regime's forces continue. More than 1,000 civilians have been killed since the beginning of the year in Idlib due to regime attacks, reports say, while more than 3 million civilians are caught in the violence in Idlib province, and tens of thousands have escaped from the south to areas neighboring Turkey.

A NEW WAVE OF REFUGEES

Turkey, which already hosts over 3.5 million Syrians, fears a new wave of refugees. Even though the leaders of the three countries say that they want to protect civilians' lives, most probably the military campaign by the Russian-backed Assad regime will continue.

If we summarize, the situation of Idlib, the formation of the Syrian constitutional committee and the return of Syrian refugees were the main issues discussed in Ankara. Iran also spoke about the U.S.' Syria policy, gaining support from its two Astana partners. The trio's statement suggests that the three sides want to leave behind their disagreements, starting with the constitutional committee, even though it is a low possibility. No exact date was announced for the launch of the committee, but Putin and Erdoğan said that the committee members list has been finalized and the process of drafting the new constitution will begin very soon. Nevertheless, when it comes to other major differences, particularly over Idlib, the diverging priorities of all parties will continue.