Who will stop India's atrocities in Jammu and Kashmir? 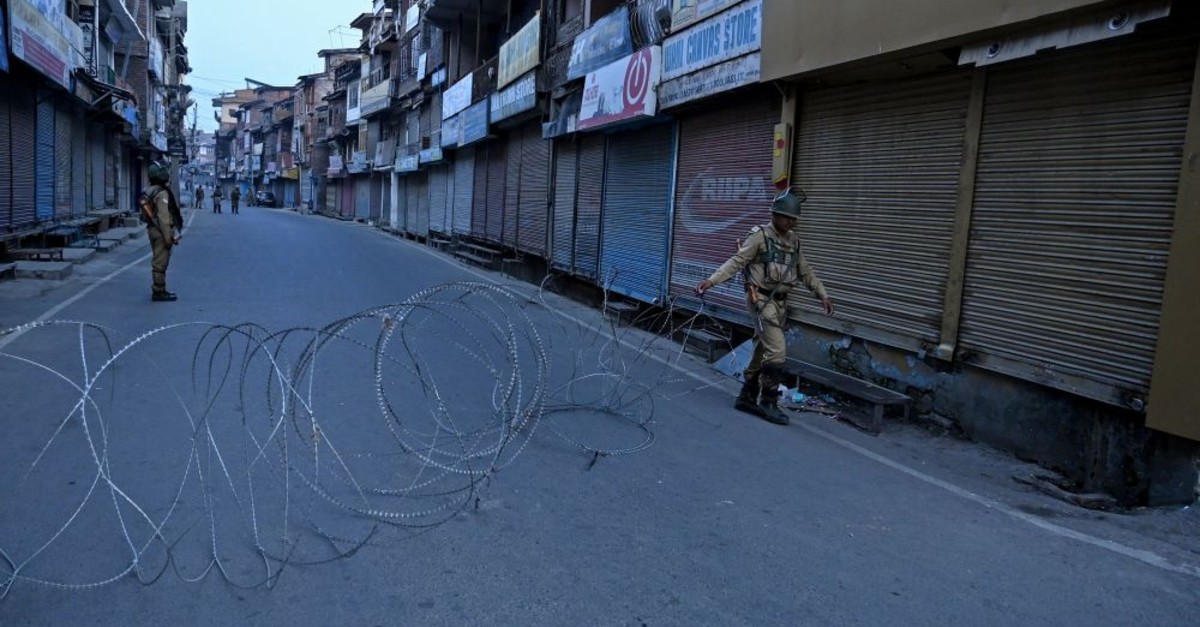 An Indian paramilitary soldier unfolds barbed wire to block a road during restrictions in Srinagar, Kashmir, Sept. 27, 2019.
by Merve Şebnem Oruç Sep 28, 2019 12:00 am

A delegation of Turkish journalists and I visited Azad Jammu and Kashmir, abbreviated as AJK, which is the Pakistan-administered portion of the larger Jammu and Kashmir region that has been the subject of a dispute since 1947. We were there to see one of the world's longest ongoing conflicts with our own eyes and talk to the victims' families and witnesses regarding the dispute. We were free to go anywhere in AJK. We had meetings with the AJK Assembly spokesperson, AJK's prime minister and the president as well. Since it is forbidden by India and extremely dangerous to go into Indian-occupied Jammu and Kashmir (IOJK), it was unfortunately impossible to see the situation on the other side.

The Kashmiri people have struggled for 72 years, since the day the British decided to end their 200-year rule on the Indian subcontinent and divide it into two separate nations: Muslim-majority Pakistan and Hindu-majority India. The process of partition in question was not simple because in addition to the British-controlled territories, the subcontinent also consisted of about 550 sovereign princely states ruled by local monarchs and other territories under French, Portuguese or Omani rule. Today, Kashmir is the sole unfinished agenda of partition and the only region of British India that has not become a part of one of the two countries or gained independence.

The Kashmiri crisis was also one of the first issues brought to the U.N. in 1948 in the post-World War II era. It has been 71 years since the Kashmir dispute was first debated in the U.N., but a solution has yet to be reached.

Actually it was India that first went to the U.N. Security Council on Jan. 1, 1948. In January 1948, through Security Council Resolution 39, the U.N. Commission for India and Pakistan (UNCIP), an observation mission, was established to investigate the situation. And on April 21, 1948, Security Council Resolution 47 was adopted concerning the Kashmir conflict. Accordingly, the UNCIP was mandated to arrange for a plebiscite: The Kashmiris were going to decide their future – either they would accede to Pakistan or India.

Even though Security Council resolutions are legally binding and remain on the Security Council's agenda, India was belligerent, refused to cooperate and blocked the implementation of the plebiscite. Today, there are 11 Security Council resolutions for a free and impartial plebiscite under which the Kashmiri people could decide their own future. However, India doesn't just block the way but also uses violent methods to continue its illegal occupation in Kashmir. India alleges that the Kashmir issue is its internal issue, even though the whole world knows that it is not true. Let's assume that it is India's internal matter for a second and ask: How can a state try to convince international society it is normal to suppress its own people using brutal methods?

"For 40 years, the Kashmiris resisted India's occupation by using nonviolent methods," said former Kashmiri freedom fighter Sayd Abdullah Gilani during one of our meetings with Kashmiris in Muzaffarabad. "Since the international community has become deaf and blind toward the dispute, they started full-fledged insurrection in 1987. The sound of gun fire mingled with the slogan ‘Azaadi' [freedom]," he added.

Kashmiris, who have resisted Indian occupation and brutality for years, have poured into the streets many times for mass protests and lost many lives. Indian forces have deliberately targeted young Kashmiris between the ages of 12 to 30.

After 2016, India's violence escalated as Hindu nationalist Narendra Modi, the prime minister of India, increased the pressure on the IOJK. The killing of Burhan Muzaffar Wani, a popular social media figure, by Indian security forces sparked protests across Kashmir, resulting in the deaths of more than 100 and injuries for over 15,000 civilians. Following his death, Kashmir was placed under 53 consecutive days of curfew.

The current situation in Jammu and Kashmir is incredibly terrible; on Aug. 5, India revoked the special status granted to Jammu and Kashmir under Article 370 of the Indian Constitution – an illegal, immoral and unilateral undertaking. This article, along with Article 35A, established special status for the disputed territory and defined a separate set of laws for the Kashmiri people in the IOJK, including those related to limited citizenship, ownership of property and fundamental rights of the current residents of Jammu and Kashmir, which are critical for a plebiscite under U.N. auspices. As a result of this provision, Indian citizens from other states could not purchase land or property in Jammu and Kashmir. All of those are changing now.

In 2014, Modi pledged to integrate the state of Jammu and Kashmir into India as a part of the Bharatiya Janata Party's (BJP) propaganda for the 2014 general election. The BJP, along with its parent organisation, the Rashtriya Swayamsevak Sangh (RSS) movement, a Hindu nationalist group, attempted the abrogation of Article 370 after the election.

This is a violation of Security Council resolutions, and it is against the wishes of the residents of Jammu and Kashmir. Following mass protests against India's illegal annexation, today the people of the IOJK are facing the 53rd day of a curfew. Deployment of 190,000 additional troops, which makes the number of Indian occupation forces in Jammu and Kashmir 700,000, makes Jammu and Kashmir the most militarized zone and largest prison in the world.

Today, there is no access to the region for any observer or third party, despite the situation being repeatedly highlighted by international media. Communication channels for the residents of Jammu and Kashmir are blocked – there is no internet, phone or mobile connectivity. The exact number of arrests and detentions are not clear, but it is known that it is more than a thousand. Prominent political figures of the Kashmiri leadership either pro or against India are among the people arrested, such as 80-year-old Farooq Absyllah; Mahbooba Muhti, the former chief minister from Jammu and Kashmir Peoples Democratic Party; Omar Abdullah, the former chief minister from the Jammu and Kashmir National Conference; Syed Ali Gillani from the All Parties Hurriyet Conference; Mirwaiz Umer Farooq from the All Parties Hurriet Conference; and Yaseen Malik from the Jammu and Kashmir Liberation Front.

The U.N. Human Rights Council has condemned the human rights violations committed by India. U.N. High Commissioner for Human Rights Michelle Bachelet asked for access to the IOJK and AJK through two reports in 2018 and 2019, highlighting excessive use of force and pellet guns, use of torture, enforced disappearances, arbitrary detentions and rape as an instrument of suppression.

Also, U.N. Secretary-General Antonio Guterres released a statement after Aug. 5, expressing concerns over reports of restrictions on the Indian side of Kashmir, which could exacerbate the human rights situation, and called on all parties to refrain from taking steps that could affect Jammu and Kashmir.

The Association of Parents of Disappeared Persons and the J&K coalition of Civil Society (JKCCS) released a report, "Torture: Indian State's instrument of control," and revealed that there have been more than 500 cases of water boarding, electrocution, dunking detainees' head in water mixed with chili powder, beating with sticks and burning with rods, heaters and cigarette butts in the IOJK.

International human rights organizations have launched solidarity campaigns with Kashmir people, condemning the revocation of the resolution, while Hindu nationalists celebrated the illegal act. Genocide Watch voiced alerts in August. Amnesty International started a campaign on social media, #LetKashmirSpeak, in addition to its report in 2019, which highlighted the brutalities in the IOJK. Human Rights Watch also released a report revealing that basic freedoms in the IOJK are at risk and urged the Indian government to immediately resume communication channels.

In response to Pakistan's request, a Security Council meeting was held on Aug. 16. This meeting reaffirmed the "internationally disputed" status of Jammu and Kashmir, reiterated the U.N.'s role in the dispute, and repudiated the Indian position that their actions were an "internal affair."

Indian occupied forces have picked up underage children in the middle of the night, according to the witnesses. Some 10,255 Kashmiri youth have been injured due to deliberate use of pellet rounds.

Today, the humanitarian nightmare in the IOJK is worsening daily. India is falsely claiming normalcy but if everything is ok, why are the curfew and communication blockade continuing, and why doesn't the Indian state let third parties enter Jammu and Kashmir?

Nawaz Sharif, the then-prime minister of Pakistan, brought the human rights violations in the IOJK to the U.N. General Assembly in September 2016, as every government and state representative has tried to do during the international meetings they attend. Imran Khan also addressed the 74th session of the U.N. General Assembly this week over the latest situation in Kashmir, once again asking the organization for help to stop the bloodshed and implement UNSC resolutions, highlighting the atrocities that have already been witnessed by the entire world. President Recep Tayyip Erdoğan raised the Kashmir issue on Tuesday during his General Assembly speech.

That said, emboldened by international silence, and motivated by political and economic compulsions, Indian aggression is obviously increasing. That is why the international community should urge India to restore the special status of Jammu and Kashmir, end the curfew and ensure normalcy in the IOJK – and ultimately implement Security Council resolutions. The people of Jammu and Kashmir are the key stakeholders in any discussion or decision related to the future of the region. The emergency situation in the IOJK requires urgent humanitarian organizations to play a role in this regard.

It's disappointing to see that India is not the only one closing the doors on any solution, but the U.N. seems to be doing the same today. The silence of the U.N. and the ineffectiveness of the Security Council is just further evidence of the problematic structure of the organization, which has failed to fulfill its claims to protect global peace, as we bear witness to conflict in zones such as Somalia, Cambodia, Srebrenica, Rwanda, and now in Syria. The apathy of the world and non-implementation of Security Council resolutions have paved the way for Kashmiris to take up arms opposing India's brutality, and India subsequently used the tragedy of 9/11 as an opportunity to label the Kashmiri struggle for freedom as a form of terrorism. Sadly, the world was ready to buy it. Regardless, the fact that both Pakistan and India are nuclear powers should scare the U.N. enough to compel them to get involved in the Kashmir conflict. The two countries, which have already gone to war three times, now have nuclear weapons to contend with, and the subcontinent is heating up again.