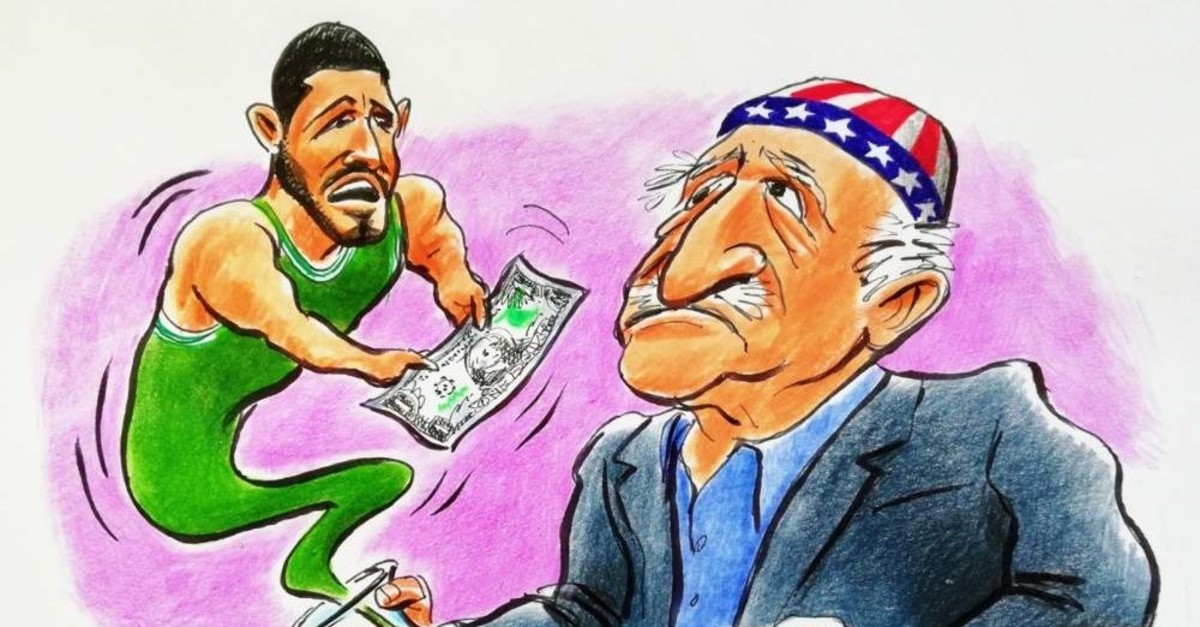 The 2016 attempted coup in Turkey has laid bare the self-exiled Fetullah Gülen's twisted doctrine as well as the hidden agenda of the Gülenist Terror Group (FETÖ), previously known as the Gülen Movement, all over the world.

At one time, the world knew Gülen as an enigmatic Turkish Muslim scholar who stated in his books that he believed in science, interfaith dialogue and democracy.

His group's public profile was defined primarily by the worldwide network of schools, universities, dialogue centers and organizations that it operates, yet little was known about the inner workings of their educational structure, raising the question of how the movement became one of the most powerful Islamic organizations in the world.

This mysterious question found an answer in 2013. Fetullah Gülen's followers were often clean-shaven, English-speaking individuals educated in the West, which allowed them to enter the judiciary and police without attracting the attention of the secularist establishment since at least the 1980s. However, despite their image of breaking Muslim stereotypes, it was revealed that they had set up a huge network within the state lead by outsiders like “judiciary imams” or “police imams,” who are members of a long chain with a hierarchy of imams loyal to their leader, Gülen, believed to be the “imam of the cosmos” by his followers. It might sound like a joke, but it is not.

FETÖ’s goal was to become "the Establishment" of Turkey. They infiltrated almost every branch of Turkish bureaucracy from the Ministry of Foreign Affairs to the Directorate of Religious Affairs. You name it, they were already inside.

They built a structure that Turkish people called "the parallel state." In 2011, during a heated debate online with a couple of Gülen loyalists, one of them smirkingly told me: “We can let any party win the elections. Any of them can be the elected government. But we are running the state.”

Everything was going very well for them, until they ran into rough weather. In 2013, they opened a war against then-Prime Minister Recep Tayyip Erdoğan, the current president of Turkey, in order to overthrow him.

The fight between the elected Justice and Development Party (AK Party) government and the parallel state of the Gülenists was fierce. Beginning to show the signs of war in 2011-12, the Gülenists became angrier and unboundedly dangerous for Turkey after they lost every battle against Erdoğan, who was determined to clean Turkey's state apparatus of this shady network. In 2016, Turkey learned that the Gülenists had nested inside the Turkish military too, as they turned the fight into a bloody coup attempt, and they failed. Since then, they have increased their smear campaigns against Erdoğan, and Turkey as well, as they are unwanted by Turkish people from all walks of life.

Besides his group stealing exam questions, sharing them with its followers and deciding who would take which position inside the Turkish state, Gülen also paid too much attention to increasing its soft power in order to enhance its network and to reach other countries. Using public funding for the benefit of FETÖ, he made sure that his chosen followers went abroad, learned English and other languages with state scholarships, and made high-level contacts to secure the secret terror group’s future activities. There is no doubt that Gülen is now trying to follow the same pattern in other countries by using methods such as tax fraud and money laundering.

As I said, expanding his network has been very important for Gülen; that is why his golden boys in particular have always been priceless for him. With their names and faces, he has been gaining more followers and infiltrating institutions, big companies and other industries. His priority has always been sports. Hakan Şükür, for instance, a very popular football player for Turkish football club Galatasaray, who earned the title of top scorer for three years, was Gülen’s precious puppet for years. Şükür opened for Gülen a shiny door to reach businessmen, famous people and other sports players. In return, Gülen put all his effort into getting him go into politics and become a deputy after he ended his football career. In that way, Şükür was still going to be a rainmaker for him.

The situation of Enes Kanter, the Turkish-origin NBA player who joined the Boston Celtics this year, is no different than Hakan Şükür's. Kanter frequently appears on the media and has recently been presented as a “human rights defender” in the U.S. If you read anti-Erdoğan American papers and listen to American politicians, you would think that he is an fearless activist and a “brave vocal critic” of Erdoğan, who is the “dictator” of Turkey.

Most recently, two Democratic Party senators, Edward Markey and Ron Wyden, decided to team up with him. Inviting him to Capitol Hill in Washington D.C. on the eve of Erdoğan’s White House visit last week, they introduced a bill to condemn the alleged human rights violations of Turkey. According to them, Kanter was a victim of Erdoğan’s targeting of his political rivals. Kanter also took part in a congressional briefing with Republican Seth Moulton later that day. In addition, The Washington Post published an op-ed by Kanter, in which the basketball player advised U.S. President Donald Trump on what he should say to Erdoğan later that day.

Do these seem like a coincidence? Well, not for me. Obviously, Gülen, who Enes Kanter says is a father to him, selected his latest golden boy as the spokesperson of his network. In order to use Kanter's popularity as an NBA player and his loyalty to him, Gülen started to throw money around. It is, of course, an opportunity for Erdoğan critics not to miss. Now they are trying to make Kanter the “Turkish Malala.”

Right after the failed coup attempt of the Gülenists on July 15, 2016, Kanter announced that he changed his last name as “Gülen” and defined himself as “the servant” of the Gülenist network. He has not hidden his support and loyalty to Gülen; on the contrary, he publicly declares that he is a Gülenist. That in itself should be enough to see that his aim is not to work for the good of Turkey. Rather, he is simply a mouthpiece of Gülen, doing what Gülen says and saying what Gülen wants.

Instead of using his NBA platform as an arena for playing basketball, Kanter uses it to attack Erdoğan, who cleansed the FETÖ elements from the Turkish state apparatus. He is not raising awareness on the human rights abuses in Turkey; he is trying to save the Gülenists and their image by portraying them as the victims. In fact, Kanter wants Turkey to go back to the “good old days” of the network when the Gülenists were powerful and held most of the control of the Turkish judiciary, security forces and almost all the branches of the state apparatus.

Kanter alleges that before the 2016 attempted coup, Turkey had “a lively news media, a somewhat independent judiciary and vibrant civil society.” That is wrong, and the truth is the complete opposite. First of all, the Gülenists were controlling the news media. They not only used their own TV channels but also put their most loyal and influential followers in other media outlets to control the news flow. Second, via their prosecutors and judges, they were controlling the judiciary, taking it far from being independent. With the help of their members in the police forces, they launched investigations following illegal wiretaps, doctored tapes and accused innocent people of illegal activities. From the Ergenekon trials to the Balyoz (Sladgehammer) investigations and many others, the Gülenists got rid of people who were not their affiliates and put loyalists in their places. Even the football clubs such as Fenerbahçe were among their targets. Almost everyone in Turkish society feared them. Third, they asked for money under the pretext of developing their educational activities and no one dared to reject the requests because they knew there would be payback.

Kanter argues that the journalists and activists are now in prison, while in reality the ones in prison are those linked to terrorists (this is a subject for another piece). In addition to that, the Gülenists actually put the journalists in prison by putting the headlines on their papers: “They are not arrested for their journalistic activities.”

I am not angry with Enes Kanter but I feel sorry for him. Such a talented young man is wasting his life for an twisted old man who introduces himself as a spiritual leader but is actually an evil man who wants to control Turkey and become the most powerful man in the country through illegal means. Being a vocal supporter or spokesperson of Gülen makes Kanter appear to be a person attacking his own country for no reason. But, of course, his actions are for the benefit of Gülen. That is the reason some Turks protested him last month outside a Cambridge mosque after a Friday prayer while thousands more criticize him on social media. Instead of calling these people "Turkish agents," Kanter should give his ear to them and listen to why they are disappointed in him.

That said, he is unfortunately just a poor boy who is heavily brainwashed by Gülen, a man who does this all the time to conservative young people looking for a spiritual path to follow.

As a matter of fact, the Gülenists have been working recently to create a public image that totally contradicts reality. The movement and its leader, who likes to talk to Western media and reiterate his commitment to democracy again and again, were previously defining themselves quite different in Turkey.

They criticized even the Islamists in Turkey for not praying enough, for not being as devoted to the religion as they claim to be, etc. Until 2014, their discourse on Turkish and English media was as distinct as black and white for a long time with regard to matters of religion, democracy and freedom. Gülen's furious sermons posted online, in which he and his followers cursed Erdoğan – such as an old one in which he asks God to "burn down their houses, spoil the peace in their homes, break their unities" – has also been in contradiction with the movement's self-promoting characteristics of "tolerance" and "love."

People in Turkey now agree that Gülen psychologically manipulates his followers to ensure control. He and his followers think that God has chosen them and that Turkey has been promised to them by God. He maintains absolute leadership by bandying around myths about himself.

He pretends as if he sees and meets with angels and says the Prophet Mohammed often visits their organizations. According to Latif Erdoğan, his former right-hand man, Gülen told some of his followers that he was talking to God one day and God said to him, "I created the world for Muhammad but am sustaining it for you."

Some of Gülen's followers think he is the Mahdi, or even the Messiah, as a result of a confusing mix of strict Islamic rules and interfaith dialogue. His ideas are promoted instead of those of Mohammed's, which of course ensures that no one can question him, no one can engage in rational deliberation and everyone has to submit to his rule even if he is wrong.

Many young conservative people in Turkey were brainwashed and exploited by him in Gülenist schools, prep classes and colleges for years. It looks like this danger still continues for the ones outside of Turkey.