Who benefits from a NATO without Turkey? 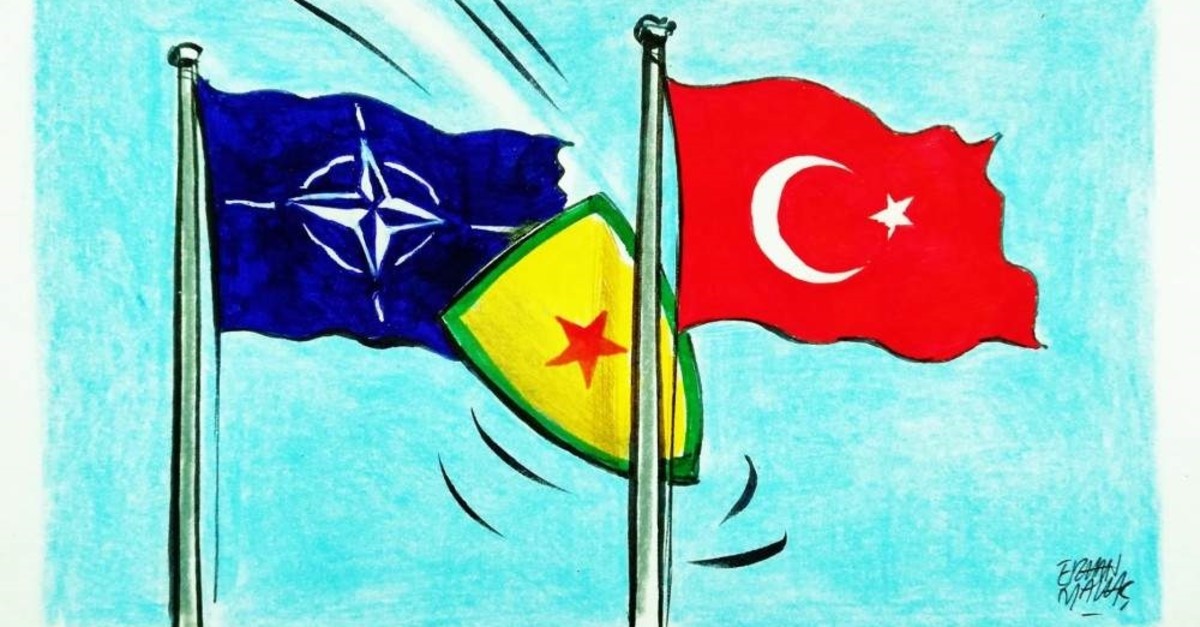 Some Russian military experts and diplomatic sources admit that it was a huge mistake cornering Turkey at the end of the 1940s as that pressure made it become a member of NATO.

“If we didn’t threaten Turkey as much as we did, they might not have joined the Trans-Atlantic Alliance,” they say.

How different the situation is today. In the future, we might hear such words from NATO as some NATO countries are making the same mistake that the Soviets made before.

Relations of Western countries such as the U.S and France with Turkey have hit a low point recently, despite the close relationship between President Recep Tayyip Erdoğan and U.S. President Donald Trump. As it is impossible to isolate problems between, for instance, Turkey and the U.S. or Turkey and France, the Turkey-NATO relationship is also in troubled waters. Moreover, this ongoing situation paves the way for hot debates, not only within NATO’s inner sanctum but also in front of the microphones.

Recently, French President Emmanuel Macron shocked the world by saying that he did not know whether NATO’s commitment to collective defense was still valid and that the alliance was experiencing “brain death.” Macron was not only criticizing the lack of strategic coordination in the Alliance or the leadership of the U.S. According to him, NATO members can no longer trust the U.S., which reached a deal with Turkey and decided to withdraw its troops from northern Syria. It is obvious that he was, in fact, furious at Turkey’s unilateral ground operation in northern Syria, namely Operation Peace Spring, which aimed to cleanse terrorist elements east of the Euphrates and establish a safe zone for Syrian refugees.

Trump said that he thought the French leader had been very disrespectful to other alliance members and added, “It is a very, very nasty agreement.”

Erdoğan was disappointed with Macron’s remarks too, and said, “Have your own brain death checked out first before criticizing NATO.”

German Chancellor Angela Merkel also rejected Macron’s criticism of NATO, stating, “I don’t think such an all-round blow is necessary, even if we have problems, even if we have to pull ourselves together.” But it was not only that; according to a New York Times article, Merkel also said: “I understand your desire for disruptive politics. But I’m tired of picking up the pieces. Over and over, I have to glue together the cups you have broken so that we can then sit down and have a cup of tea together.” With that, she clearly underlined the growing difference between French and German perspectives.

Macron’s interview has faced serious criticism from other European countries.

It was Trump who made headlines before, during or after such high-level meetings like the one in London where NATO leaders have gathered to mark the 70th anniversary of the alliance.

Actually, NATO has faced many crises in its 70 years. It has recently come across several threats from the outside but also faces a lack of internal cohesion. As I said, the disputes between Turkey and its NATO allies affect the Turkey-NATO relationship, and this triggers intra-NATO tensions. The allies’ policies toward Turkey may not be the only source, however, they are certainly the biggest one that has caused internal tensions within the alliance.

As a matter of fact, the so-called “values” of democracy, freedom and the rule of law, which are used as a stick toward Turkey, are not the main concerns of the NATO allies. When you check, you can see other NATO members with bad records regarding these values, but the leading allies chose to stay silent about that. Then what is the allies’ problem with Turkey?

Turkey purchased the S-400 defense missile system from Russia after its fruitless efforts to buy such defense systems from Western countries.

Turkey unilaterally launched its third ground operation in Syria against the People's Protection Units (YPG), which is very well known as the Syrian branch of the outlawed PKK, a terror organization listed not only by Turkey but also the U.S. and the EU.

Turkey has been defending the rights of the Turkish Republic of Northern Cyprus (TRNC). The country is conducting drilling activities and raising the stakes in the Eastern Mediterranean. It is not sitting aside and watching others.

In addition to all this, Ankara signed an agreement with Libya’s internationally recognized government last week, ahead of the NATO London summit, which denotes maritime boundaries between the two countries. The agreement has shaken up the Eastern Mediterranean as the area in question cuts across the zone where Greece, Cyprus, Israel and Egypt are planning to build a gas pipeline to link the Eastern Mediterranean gas fields to European markets.

And most recently, Turkey vetoed NATO’s new Baltic plan against Russia. The plan needs three-fourths approval for it to be passed, as in the case of all other approvals. Ankara will hold out and use its veto power until NATO allies understand that it is fighting against the YPG terrorist group because it threatens Turkey’s national security and until they designate the YPG as a terrorist organization.

As it seems, these disputes are not about the “values” or “norms,” they are all about the strategical interests of the countries in the geography where Turkey is located. Actually, Turkey’s geographical location and its great contribution to the alliance has been making Turkey a key player.

Geographically, Turkey is located in the most strategically important territory of the world. As the only NATO member state neighboring the Middle East and bordering Syria, Iraq, Iran, it is also near Lebanon and Israel. Turkey also controls the Bosporus, the Marmara Sea and the Dardanelles between the Black Sea and the Aegean Sea, which is linked to the Mediterranean Sea. Turkey’s military power and its geostrategic location are crucially important as it neighbors Russia by the Black Sea, making the country a key player against Russia for NATO.

Ankara's contributions to the alliance are countless, but let’s name some it has made as an ally of NATO and the U.S. Turkey fought alongside the U.S. during the Korean War between 1950 and 1953. It agreed to allow a base for U.S. nuclear bombs and intermediate-range ballistic missiles to be established on its soil during the Cold War, making itself a nuclear target for the Soviets. It participated in Operation Allied Force against Serbia in 1999. It supported the NATO Baltic States with air patrols. The Turkish military participated in NATO peacekeeping in Bosnia and Kosovo. And Turkey is the only country that fought against Daesh on the ground among NATO countries.

And yet, what Turkey has done so far is not enough.

At first, it was the international media that was delivering the message that Turkey is unwanted in NATO. Today, some politicians are directly joining the chorus and attacking Turkey's NATO membership. I cannot count the number of articles I have read calling on NATO to kick Turkey out of the alliance in the last couple of years. Since no member can be kicked out of NATO without its will, one suspects that either some are trying to push Turkey to leave the organization or looking for some loopholes in the books to get rid of the country. It is almost the same with respect to Turkey-U.S. or Turkey-EU relations, as some put pressure on Turkey whenever Ankara differs from the U.S. or European countries on any subject.

Turkish society has long been fed up with hearing at every turn that Turkey might not be a part of the EU, especially when it is related to Turkey's internal matters, sovereignty and security concerns. Turks no longer have the ambition to join the EU because of such threats. Likewise, Turks have started to discuss if NATO membership is really necessary.

What if it leaves?

Let's say Turkey is out of NATO, like the circles in question want so badly. Who will benefit? In terms of the geostrategic perspective I mentioned above, Turkey is crucially important for NATO, maybe more than NATO is for Turkey. Turkey joined NATO in 1952, even before European countries such as Germany or Spain. The decision to make Greece and Turkey members of NATO at the time of the first NATO enlargement stemmed largely from Cold War strategies against the Soviet Union. The membership of Turkey, which is still a strategic ally at the most eastern end of NATO's territory today, was previously connected with the construction of the Incirlik Air Base and the signing of a joint-use agreement with the U.S. in 1954. Now, however, there is more than that.

At the 2010 Lisbon summit, NATO leaders adopted a new strategic concept to serve as the alliance's road map for the next 10 years. The strategic concept involved an action plan that would make NATO more agile, more capable and more effective against new modern threats and challenges. It was an inevitable move after former Warsaw Pact member countries of Eastern Europe joined the EU, and NATO's former concept was unable to respond to emerging threats like terrorism. So, Turkey's membership in NATO became more important after the adoption of the new strategic concept as a matter of realpolitik and military power because of its geostrategic position.

While Turkey still houses tactical nuclear weapons under NATO's nuclear burden-sharing agreement, which provides a bargaining chip to pressure Russia and a deterrent tool against non-state actors in the Middle East, it also agreed to host the X-band radar of NATO's ballistic missile defense system under the action plan, taking the risk of deteriorating relations with its neighbors.

The X-band radar, which provides instantaneous data if there is an emergence of a ballistic missile threat to Europe, is a primary asset of the physical infrastructure of NATO's missile defense system due to its sensor capabilities. It is located at the Kürecik Radar Station in Malatya. Turkey is also one of the key members in the Very High Readiness Joint Task Force (VJTF), which is NATO's spearhead force that was formed following the decision to enhance the NATO Response Force (NRF) in 2014.

So Turkey's membership is crucial to NATO, as it has a vital role in confronting threats from the east and the south, pressuring Russia and protecting Europe. This continues to be the case despite the fact that NATO members have repeatedly failed to help Turkey when its security has been at stake and even though they have a commitment to defend one another against threats.

Today, there is fear in Western capitals as Turkey is getting closer to Russia than ever before, but to be honest, it is not Turkey's fault. If you alienate a country which is geographically close to emerging threats, it is inevitable that it will start evaluating other options. In addition, the anti-NATO countries will try to fill the gap with respect to the needs of the country in question, as its geostrategic position means a lot for them as well. Turkey's policies to protect itself and its interests might upset its NATO allies, but what should it do after being isolated or abandoned again and again?

It is easy to shout, “Kick Turkey out of NATO,” but one must first ask, “Who benefits from a NATO without Turkey?”