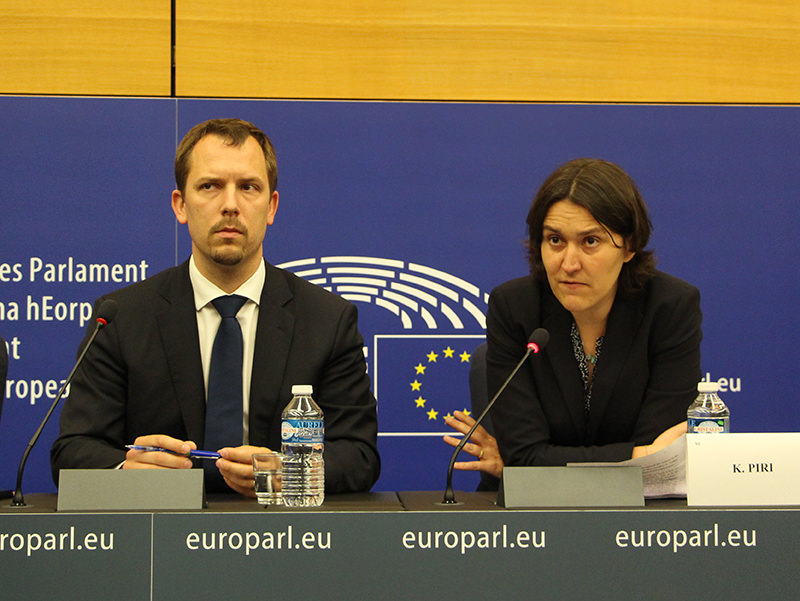 | AA Photo
by Nurbanu Kızıl May 21, 2015 12:00 am
Turkey's progress and efforts in numerous fields have been praised by Kati Piri, the rapporteur of European Parliament for Turkey and Zanda Kalnina-Lukasevica, the parliamentary state secretary for EU affairs, who hailed the steps taken by the Turkish government through democratic and legal reforms as well as the development of a civil society in the country.

At a press conference in Strasbourg, France on Thursday before Turkey's 2014 EU Progress Report was discussed at the European Parliament, Piri said the steps taken by the Turkish government create significant hope for the modernization of Turkey. She said serious progress has been achieved in this respect in the past few years following negotiations and that Turkey aims to become a more modern and democratic country with the pledges it made a decade ago. She suggested that the EU model should continue to be the basis for the reforms carried out in Turkey.

Piri remarked on Turkey's progress in legal reforms. "The legal reforms and the decrease in the number of applications made to the European Court of Human Rights [ECtHR] indicate that there is progress in the justice system, despite some concerns," she said. Piri highlighted that the permission of individual applications to the Constitutional Court and the reduction of maximum detention period to five years from 10 years are significant steps in Turkey's progress.

She also praised Turkey's commitment to take care of those who fled war-torn countries and said Turkey is bearing the burden of the refugee crisis on its own. Piri applauded Turkey for accepting 2.5 million refugees and said it was not an easy task. She said Turkey provides free health care to the refugees and provides high standards in terms of living standards and education for refugees. She said the EU must provide assistance to Turkey if it is serious in resolving the refugee crisis and added that the report is a clear indicator that Turkey is determined to enhance dialogue with the EU.

Kalnina-Lukaševica also hailed Turkey's efforts in taking in refugees, cooperation against terrorism and initiating the country's reconciliation process to put an end to the decades-long conflict between the state and the PKK.

Kalnina-Lukaševica said Turkey is an active partner in the fight against terrorism throughout the region and acknowledged the country's efforts in this respect.

European Parliament, which was expected to vote on Turkey's 2014 EU Progress Report on Thursday, has postponed the vote to June. Such reports are prepared for potential candidate countries and are discussed at the European Council and European Parliament.

Piri called the report one of the most constructive reports of its kind.