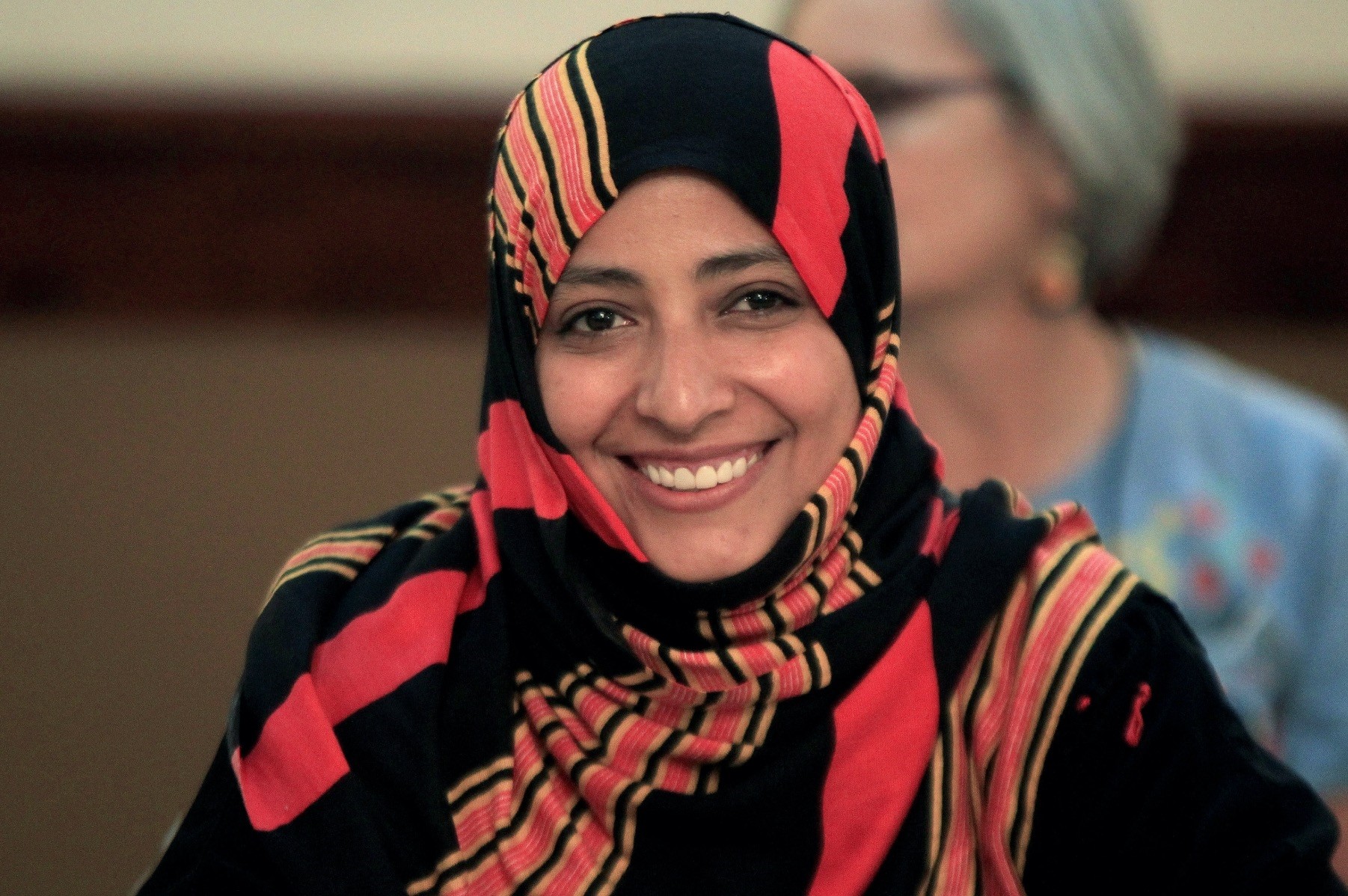 Nobel Peace Prize laureate Tawakkol Karman of Yemen smiles during a news conference as part of the Nobel Womenu2019s Initiative to gather a first-hand account of the ongoing violence against women, Tegucigalpa, Honduras, Oct. 24, 2017.
by Hilal Kaplan Feb 15, 2018 12:00 am

Activist, politician, journalist and Nobel Peace Prize laureate are only some of the terms used to describe Tawakkol Karman, who dares to stand against unjust interventions of the United Arab Emirates in Yemen

Known as the "Mother of the Revolution," Yemen's Tawakkol Karman is one of the most influential women in the Arab world. She was awarded the Nobel Peace Prize in 2011, at the age of 32, in recognition of her work in nonviolent struggle for the safety of women, women's rights and for her full participation in peacebuilding work in Yemen.

Daily Sabah columnist Hilal Kaplan met with Karman to talk about the United Arab Emirates' influence and policies in Yemen as well as Saudi officials' remarks on President Recep Tayyip Erdoğan, Turkey's stance regarding the status of Jerusalem, Operation Olive Branch, the coup attempt of the Gülenist Terror Group (FETÖ) and Turkey's fight for democracy.

Daily Sabah: Ms. Karman, you have stated that the United Arab Emirates is destabilizing Yemen. You have even gone further to say that "the UAE is only a collapsible paper tower." Can you explain how you see the UAE's role in Yemen?

Tawakkol Karman: Every step taken in Yemen by the UAE is against Yemen's interest. Abu Dhabi has established armed groups and forces that neither affiliate to the Yemeni national army nor follow the orders of the legitimate government. Abu Dhabi controls ports and airports and refuses to hand them over to the Yemeni legitimate government. Abu Dhabi has set up secret prisons in which all forms of torture are practiced against Yemeni citizens who oppose its ambitions in Yemen. Abu Dhabi prevents the legitimate president from returning to the interim capital Aden, and treats him in an inappropriate manner.

It is unfortunate to say that the UAE has exploited the country's vulnerability caused by the Houthi coup and the ongoing war to achieve its own goals. That requires keeping Yemen in a whirlpool of chaos so that the UAE continues to seize control of Yemeni ports and islands, especially Socotra, one of the most beautiful islands in the world.

D.S: For those who claim that the UAE supports the legitimate authority in Yemen, could they tell us why UAE planes have attacked, more than once, the presidential protection forces of President Abdrabbuh Mansur Hadi while being in a state of self-defense? Could they provide an acceptable explanation for not allowing the president to return to Aden?

T.K: But despite all this, Yemen will triumph because it is a nation that is firmly rooted in the past, unlike the UAE, which, though it pursues aggressive policies, would not be able to face potential challenges in the future.

D.S: After your critical remarks, the Islah Party of Yemen issues a statement saying that your words do not represent them and that they have decided to freeze your membership status. What is your response?

The decision to freeze my membership in the Islah Party is illegal for many reasons, but this is not important at least for now. Yemeni politicians, including those from Islah, are under intense pressure from Saudi Arabia. This, in my opinion, is the price of not taking firm stance on the Saudi-led coalition's misbehavior in many crucial issues. It should be clear that any area liberated from the Houthi coup but not handed over to the legitimate authority is occupied. This is my conviction, and I would never come to a compromise when it comes to Yemen's national unity, territorial integrity and sovereignty.

In fact, it is strange that the UAE behaves this way. This may be due to the UAE's excessive hostility toward the Muslim Brotherhood and the Arab Spring and to its perception that Turkey supports the change project in the region.

Some attribute the UAE's anti-Turkey stance to the fact that Abu Dhabi is dissatisfied with Turkish policy that tends to unify Islamic efforts to curb Western hegemony.

The remarkable correlation shared by the UAE and its global and regional allies is to fight the Arab Spring, political Islam groups and any project that is independent of American hegemony.

D.S: How do you evaluate Turkey's role in the region and also President Erdoğan's initiatives to protect the unique status of Jerusalem?

We have had close historical ties with Turkey that definitely has a good presence in the region for two main reasons in my view: Its successful political and economic experience and its approach to the issues of the region, especially the Palestinian issue. President Erdoğan's initiatives to protect the special status of Jerusalem are only a manifestation of his support for Palestinians.

D.S: The Turkish Armed Forces, along with the Free Syrian Army (FSA), started a military operation in Afrin against the People's Protection Units (YPG) which threatened Turkey's security starting with the 2016 suicide bomb attack in Ankara. What do you think about Operation Olive Branch and do you think Turkey will be able to free Afrin and resettle willing refugees like it did in Jarablus?

Turkey has opened its doors to millions of Arab refugees, especially Syrian refugees. Such a great step would never be forgotten by the Syrian people or Arabs in general. Turkey has always refused the fact that dictator Bashar Assad continues to be in power, and this position is consistent with the desire of the majority of Syrians who aspire to have freedom and live in a state that upholds their freedoms and dignity.

D.S: You have attended Turkey's "democracy watch" events after the failed coup attempt orchestrated by the Gülenist network. What is your opinion of this network and the discourse of its leader Fetullah Gülen?

It was an extremely great battle Turkey fought for democracy and it gave the whole world a great impression of the Turkish people and their courage. My position on the Gülenist network is no different from my position on any group trying to create a parallel entity within a state. We have to distinguish between the right to be a political group seeking to come to power and the attempt to control the state using illegal action.

Hilal Kaplan is a journalist and columnist. Kaplan is also board member of TRT, the national public broadcaster of Turkey.
Last Update: Feb 15, 2018 9:09 am
RELATED TOPICS