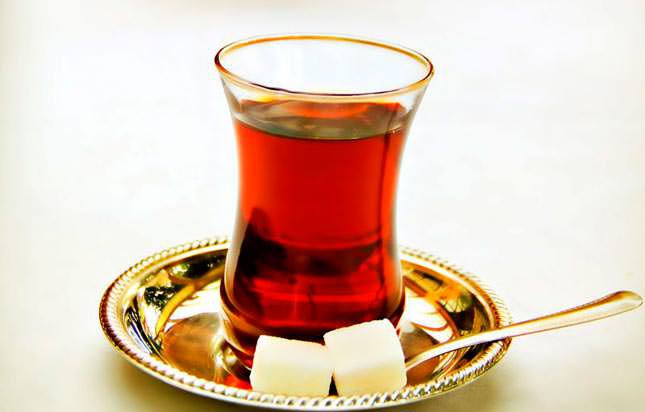 Turkey's most popular hot beverage, black tea, lowers the risk of obesity and diabetes while providing a healthy dose of antioxidants

Personally I do love my impeccable cup of tea! It's basically how I'd like to begin my day - not only to help me wake up, but rather I like to enjoy a tasteful cup of bliss first thing in the morning and actually throughout the day. When it comes to herbal, green or black tea, different things suit different people and a doctor's recommendation should never be overlooked, but for most of us, indulging in a cup or two of black tea might in fact be a healthy life choice, as some studies have shown.

Both green and black tea is made from a shrub called Camellia Sinesis, but with different processing methods. After farmers pick the leaves, they process them in various ways to generate different types of tea. In addition to the leaves being withered, rolled and heated, black tea leaves are fermented before the final heating process called the oxidation process. Green tea, instead, is processed before the oxidation process can occur and the polyphenols remain intact. Black tea is a type of tea that is more oxidized than oolong - a dark Chinese tea that has been partially fermented before drying - green and white teas.

Black tea is generally stronger in flavor than the less oxidized teas. In Chinese languages and the languages of neighboring countries, black tea is known as "red tea", a description of the color of the liquid; the Western term "black tea" refers to the color of the oxidized leaves. In Turkey, we use both terms: "black" when referring the type of tea and "red" when mentioning the quality of the brewed black tea. While green tea usually loses its flavor within a year, black tea retains its flavor for several years. For this reason, it has long been an article of trade, and compressed bricks of black tea even served as a form of de facto currency in Mongolia, Tibet and Siberia into the 19th century.

Being used as a currency is not the major benefit or makes it valuable but the effects on human health is what makes tea the greatest drink of all.

- A better heart and vessels A long-term study by the Netherlands National Institute of Public Health and the Environment found a relationship between regular consumption of black tea and reduced risk of stroke. Researchers looked at data from a study examining the health benefits of foods that are high in flavonoids (phytonutrients with antioxidant benefits).

While some of the flavonoids were obtained from fruits and vegetables, 70 percent came from black tea. The study looked at 552 men over a 15-year period. Researchers concluded that the flavonoids in black tea helped reduce the production of LDL - the "bad" cholesterol that can lead to stroke and heart attacks. Furthermore, men who drank over four cups of black tea per day had a significantly lower risk of stroke than men who drank only two to three cups per day.

Another study at Boston University's School of Medicine supported these results. For four months, 66 men drank four cups of either black tea or a placebo daily. The research concluded that drinking black tea can help reverse an abnormal functioning of the blood vessels that can contribute to stroke or heart attack. Furthermore, improvement in the functioning of the blood vessels was visible within two hours of drinking just one cup of black tea thus helping to lower the risk of hypertension in the long run.

Finally, a study of over 3,000 adults in Saudi Arabia - where black tea is preferred over green - found that regular consumption of the dark brew tea can reduce the risk of coronary heart disease by 50 percent. Not kidding! In addition, researchers also found that blood platelet activation was lower among black tea drinkers. Platelet activation is involved in the formation of a blood clot, which increases the risk of a heart attack!

These antioxidants are different from those obtained from fruits and vegetables and therefore as a regular part of our diet, they can provide additional benefits towards a healthy lifestyle. Green tea has been shown to have the highest content of polyphenols, which are chemicals with potent antioxidant properties (believed to be greater than even vitamin C). They give tea its bitter flavor.

Because green tea leaves are young and have not been oxidized, they contain up to 40 percent polyphenols, while black tea contains only about 10 percent.

Moreover, several studies showed that EGCg has a regulatory effect on fat metabolism. It has been revealed to improve exercise performance, increase fat oxidation and prevent obesity. Additionally, there is evidence that EGCg may help neutralize toxins in your body formed by highfructose corn syrup (No. 1 poison of the century), which can help to reduce the association between high-fructose corn syrup and diabetes.

Drinking tea has traditionally been associated with stress relief and many people believe that drinking tea helps them relax after facing the stresses of everyday life. We are all aware and well experienced about these calming and relaxing benefits of black tea.

However, scientific evidence for the relaxing properties of tea was quite limited until recently published studies. Not only does it help slow you down after a long day, studies show that the amino acid L-theanine found in black tea can help you relax and concentrate better.

Black tea has also been shown to reduce levels of the stress hormone "cortisol" when consumed in moderate amounts on a regular basis.

Recent study suggests that drinking black tea may speed up our recovery from the daily stresses in life. Although it does not appear to reduce the actual levels of stress we experience, tea does seem to have a greater effect in bringing stress hormone levels back to normal. This has important long-term health implications, because slow recovery succeeding acute stress has been linked with a greater risk of chronic illnesses.

So daily consumption of tea on a regular basis will have a protective effect in the bigger picture of life!

Do I have to worry about iron consumption or is it a mythical argument?

Yes, it is somewhat true! Studies show that tea does disturb iron absorption, which can aggravate anemia. However, that same research also showed that taking an iron pill or just getting enough iron in your diet can contravene that. Some chemicals in tea, called tannates, absorb the iron in your stomach and actually try to steal it before your body has a chance to absorb it. But yes, studies have shown that it can reduce absorbed iron by as much as 87 percent. To minimize this affect, you should wait at least an hour after a meal before you drink tea.

That allows your body time to absorb as much iron as possible before the chemicals in tea can steal it from you. You can also drink tea at least an hour before your meal as well. But of course don't let tea scare you, since now you know it has so many health benefits!