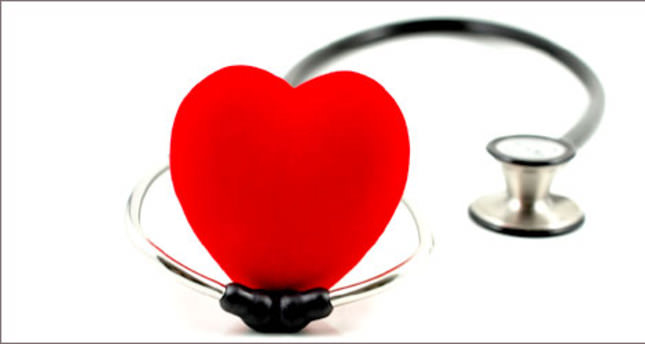 by Halit Yerebakan Sep 29, 2014 12:00 am
Everyone knows something about the heart, most of which is false apart from its size (a fact that you are all most likely aware of is that it's about the size of your fist) and the fact that it is located slightly left of center in the chest. It stays in the chest cavity just like someone lying on a bed.

As heart disease is still the leading cause of death in the world, we believe there is room for improvement in our lifestyles and that we need more healthy habits. Change is an important part of living with heart disease or trying to prevent it. Furthermore, your heart is a muscular mass that can literally change shape as a result of lifestyle choices you make every day. A jump in blood pressure or a rise in cholesterol levels is actually a warraning that urges you to learn healthy lifestyle changes. Heart attack and stroke survivors are often told to alter age-old habits.

Heart attacks are often seen in women aged over 65 and younger ages for men. None of these numbers suggest that you will not get heart disease at a younger age. I had a colleague that just passed away this month at the age of 30 after a heart attack, most probably caused by his morbid obesity. An upward trend in the incidence of heart attacks among women aged between 35 and 54 can be seen in many data collections. Another survey-based study performed by the Women's Health and American Heart Association has also shown worrying results. Forty percent of the participants said that heart disease risks are not their major concern. On the other hand, we should note that a quarter of the female population that die from heart disease start getting the first signals from their body during their teenage years. The risk of death for women who don't pay attention to the symptoms of heart disease is three times greater than women with breast cancer. Therefore, death from heart disease comes early mostly due to lack of knowledge.

On the other hand, the average age when men face a serious risk of heart attack is about 65, but they also carry the risk of heart attack at early ages just like women. According to a report published in 2009 by the National Center for Health Statistics, a quarter of total (more than 300,000) male deaths were due to heart disease. Moreover, the data showed that half of these men died due to acute heart attacks while the other half resulted from chronic cardiovascular illness. These numbers are unfortunately increasing in our country, totaling approximately 47 percent of all deaths. We should take action accordingly with our bodily symptoms before it's too late.

The latest guidelines released in November 2013 by the American Heart Association advices people inculcate a high fiber diet, sweaty exercise for 40 minutes three times a week, and maintaining healthy cholesterol levels in order to reduce the risk of heart disease.

A person who has enough knowledge about heart disease should: check their blood pressure regularly, measure the waistline, know their ideal weight, know their cholesterol levels, and measure their blood glucose levels. I know you all have heard about these terms in the past, but knowing the right numbers may save your life when your turn comes.

Some of you may manage to renovate your exercise pattern, diet, and unhealthy habits into a healthier routine easily but there are a lot of people that keep trying to make changes but unfortunately, often fail. So, as a general rule, instead of undertaking a huge transformation your aim should be to make a series of small alterations to your lifestyle to improve your heart's health. It is the most major decision you will make. Just choose whether you want a better future, or the future of a person whose breath is not enough when it is most needed. Once you start your lifestyle renovation, I am sure you will find out that change isn't so bad or even hard. Habits can be adopted and forgotten throughout life, the major point here is that you should take up healthy habits and think that you were already doing these regularly. Forcing your body into alterations is not the way to succeed; don't forget that many battles are won in your minds. Although a step-by-step lifestyle renovation may take longer than desired, it could also motivate you to make some big changes once you start seeing that there is actually something you can do.

Inactivity: Think of all the times you are lounging around during your day. Too much sitting can trigger the growth of pericardial fat, a type of golden swampy buildup that grows right in your heart and increases the risk of heart disease. Instead of increasing exercise sessions alone, which won't necessarily control this risk, sitting less is usually a good remedy. The more active you are regularly, the more your heart becomes stronger and helps you evade the risk.

Exercise: Just one 30-minute, heart-pounding workout beefs up tiny blood vessel, or capillaries, on the heart's surface. The more active and robust your arteries are, the more your heart can handle an increased blood flow to itself – and the stronger it will become over time (in other words, it will grow just like any other muscle). The aim is obviously not to grow the heart (this is an abnormality), it is actually to grow the artery bed that feeds the heart and helps increase the powering capacity of your energy core and reduce the troublesome outcome of a major heart attack. Aim for at least 2.5 hours of weekly cardio exercise to make sure your capillaries stay nice and plump. Additionally, exercise (higher than 12 hours a week) can also pose an oxidizing (rusting) threat to your arteries. So more and more is not as good as moderate exercise in this scenario.

Smoking: As you may hear every single day, puffing cigarettes increases your risk for atherosclerosis, which can contract and clog your arteries, the pipes that carry blood away from your heart. Blocked arteries can cause reduced blood flow and higher blood pressure, making your heart work overtime (as a result, depriving most of your organs of fuel they need: oxygen rich blood). A single cigarette –or even breathing in secondhand smoke – can damage the heart. You should just say "never ever" to lighting up.