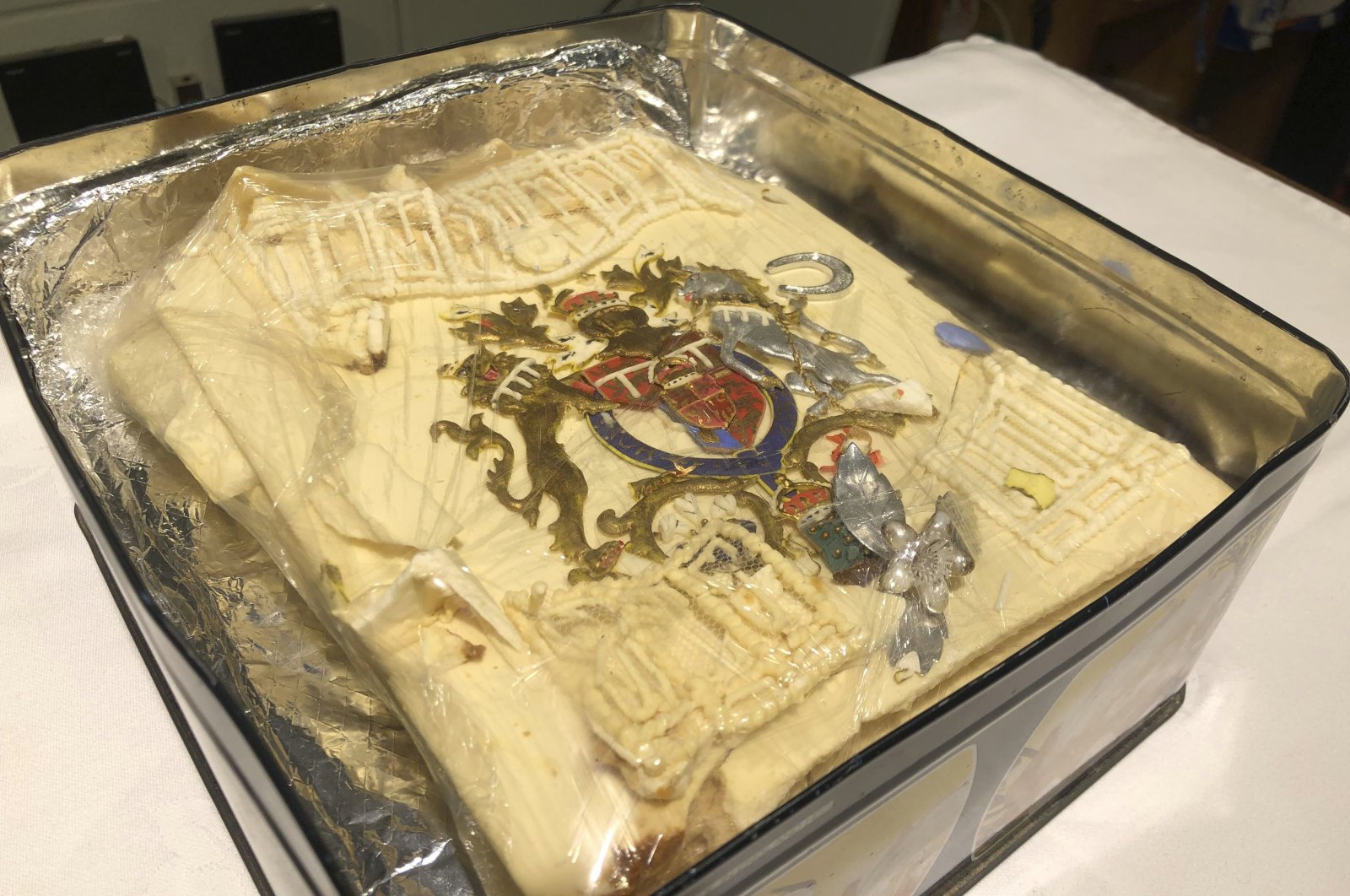 The tin containing the plastic-wrapped slice of cake from one of the 23 official wedding cakes made for the Royal Wedding of Prince Charles and Lady Diana Spencer, Dominic Winter Auctioneers in Cirencester, England, Aug. 11, 2021. (Claire Hayhurst/PA via AP)
by French Press Agency - AFP Aug 12, 2021 10:52 am
RECOMMENDED

Royal weddings always generate great interest from all around the world, even 40 years later.

A slice of cake from the 1981 wedding of Prince Charles and Lady Diana Spencer sold for 1,850 pounds ($2,558) at auction in Britain on Wednesday – with a warning not to eat it.

The 40-year-old slab of marzipan and thick white icing decorated with the royal coat of arms fetched more than three times its asking price of £300 to £500.

"We were amazed at the numbers of people wanting to bid on this large and unique piece of royal cake icing," said auctioneer Chris Albury, a royal memorabilia specialist at Dominic Winter Auctioneers in Cirencester, western England.

"There were lots of enquiries from bidders, mostly in the U.K., the U.S.A. and several countries in the Middle East," he added in an email. The successful bidder was named in British media as Gerry Layton from Leeds in the north of England. "I have always been a monarchist and I had been to see the wedding dress at Kensington Palace," said Layton.

"I thought I would like to add it to my estate, which will be going to charity after my death. I will have to think of a way to stop myself from trying to eat it though," he joked.

The cake was originally given to Moyra Smith, who worked for Queen Elizabeth II's mother at her Clarence House residence in central London. Following Smith's death, her family sold it at the same auction house in 2008 for £1,000 to a private collector, who has now sold it at a profit.

"It appears to be in exactly the same good condition as when originally sold, but we advise against eating it," the auctioneers said.

The cake remains as Smith kept it, wrapped in cling film in a cake tin that she labelled "Handle with care" and dated July 29, 1981, the day of the wedding. The auctioneers said the slice came from a multi-tier cake served to staff at Clarence House, where Smith worked in the kitchen. Apart from the main wedding cake, there were around 22 other cakes supplied by manufacturers for the royal occasion, the auctioneers said.

Wednesday's lot included order of service and ceremonial programs for the wedding, a royal wedding breakfast menu and a table seating program from Buckingham Palace.

Pieces of Charles and Diana's wedding cake still regularly go on sale and interest remains strong despite the break-up of their marriage and divorce in 1996. A piece of wedding cake in an original commemorative box sold for $2,240 in the United States in December, according to Julien's Auctions. The sale is the latest example of the continued fascination with Diana, who died aged 36 in a high-speed car crash in Paris in 1997.