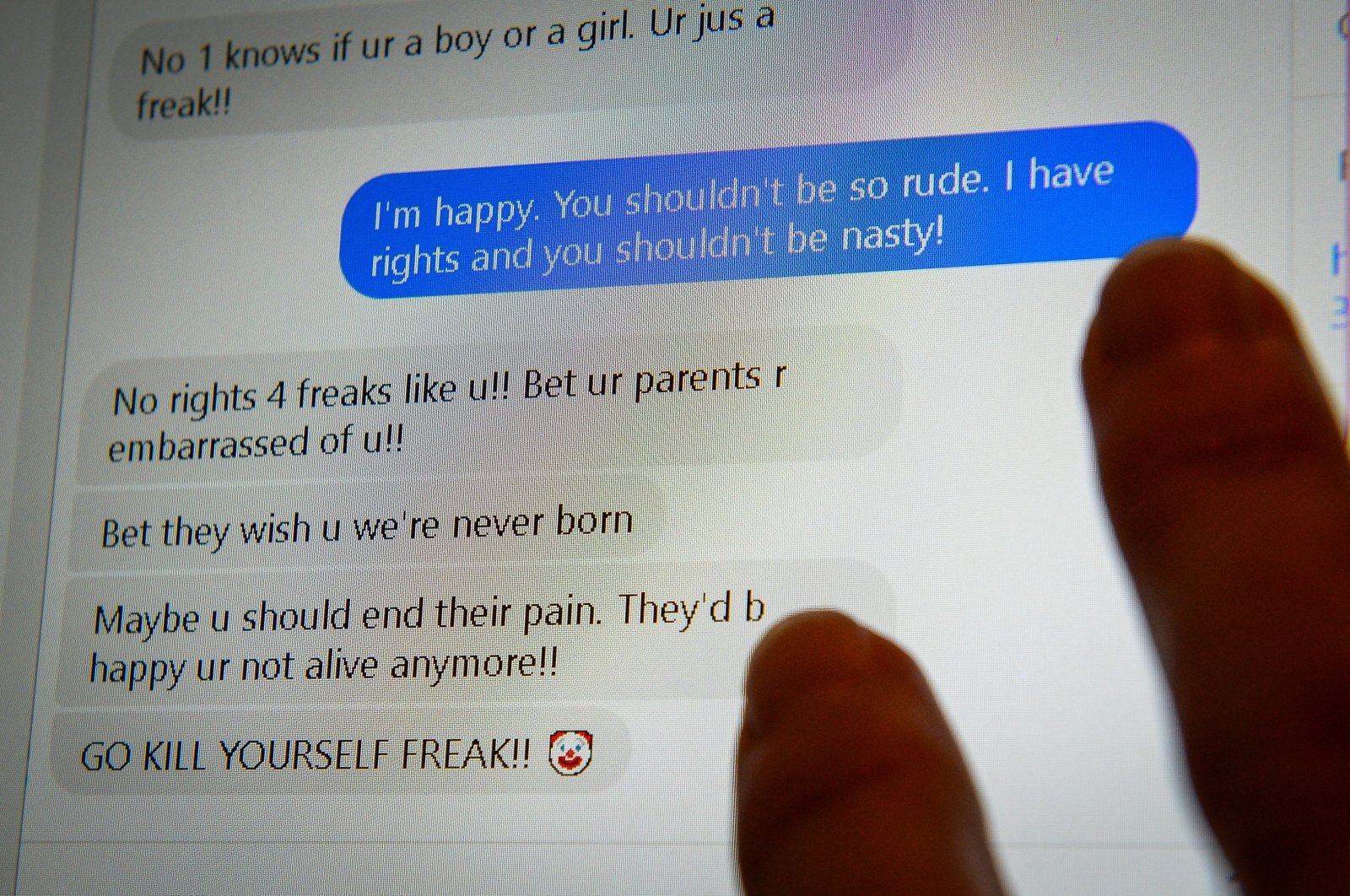 An exchange of abusive messages is seen on a laptop screen in Bristol in this undated photo. (PA via REUTERS)
by Agencies Oct 05, 2020 1:25 pm
Edited By Yasemin Nicola Sakay
RECOMMENDED

How many times have you been called names or insulted by people you don't know online? Have you ever received unsolicited images from strangers that left you scarred for life? Welcome to the lives of the majority of girls and young women around the world.

The survey polled 14,000 girls and young women ages 15 to 25 in 22 countries including Brazil, India, Nigeria, Spain, Thailand and the United States. The results showed some regional differences, with 63% of respondents in Europe reporting online abuse, followed by 60% of girls in Latin America, 58% in the Asia-Pacific region, 54% in Africa and 52% in North America.

Of the girls who have been harassed very frequently, 19% said they use the social media platform less as a result and 12% stopped using it altogether.

One in five girls and young women has abandoned or cut down on using a social media platform after being targeted, with some saying harassment started when they were as young as 8.

The charity, which will share the report with social media companies and lawmakers around the world, said the abuse was suppressing girls' voices at a time when the COVID-19 pandemic was increasing the importance of communicating online. It called on social media companies to take urgent action to address the issue and urged governments to pass laws to deal with online harassment.

"Girls are being silenced by a toxic level of harassment," said the organization's chief executive, Anne-Birgitte Albrectsen.

The study found reporting tools were ineffective in stopping the abuse, which included explicit messages, pornographic photos and cyberstalking. Nearly half of girls targeted had been threatened with physical or sexual violence, according to the poll. Many said the abuse took a mental toll, and a quarter felt physically unsafe.

"It is time for this to stop. Girls should not have to put up with behavior online which would be criminal on the streets," the report said.

Twitter said it also used technology to catch abusive content and has launched tools to improve users' control over their conversations.

Albrectsen said activists, including those campaigning for gender equality, were often targeted particularly viciously, and their lives and families threatened.

"Driving girls out of online spaces is hugely disempowering in an increasingly digital world and damages their ability to be seen, heard and become leaders," she added.

In an open letter to Facebook, Instagram, TikTok and Twitter, girls from around the world called on social media companies to create more effective ways to report abuse.

"We use (your platforms) not just to connect with friends, but to lead and create change. But they are not safe for us. We get harassed and abused on them. Every. Single. Day," they wrote.

"As this global pandemic moves our lives online, we are more at risk than ever."