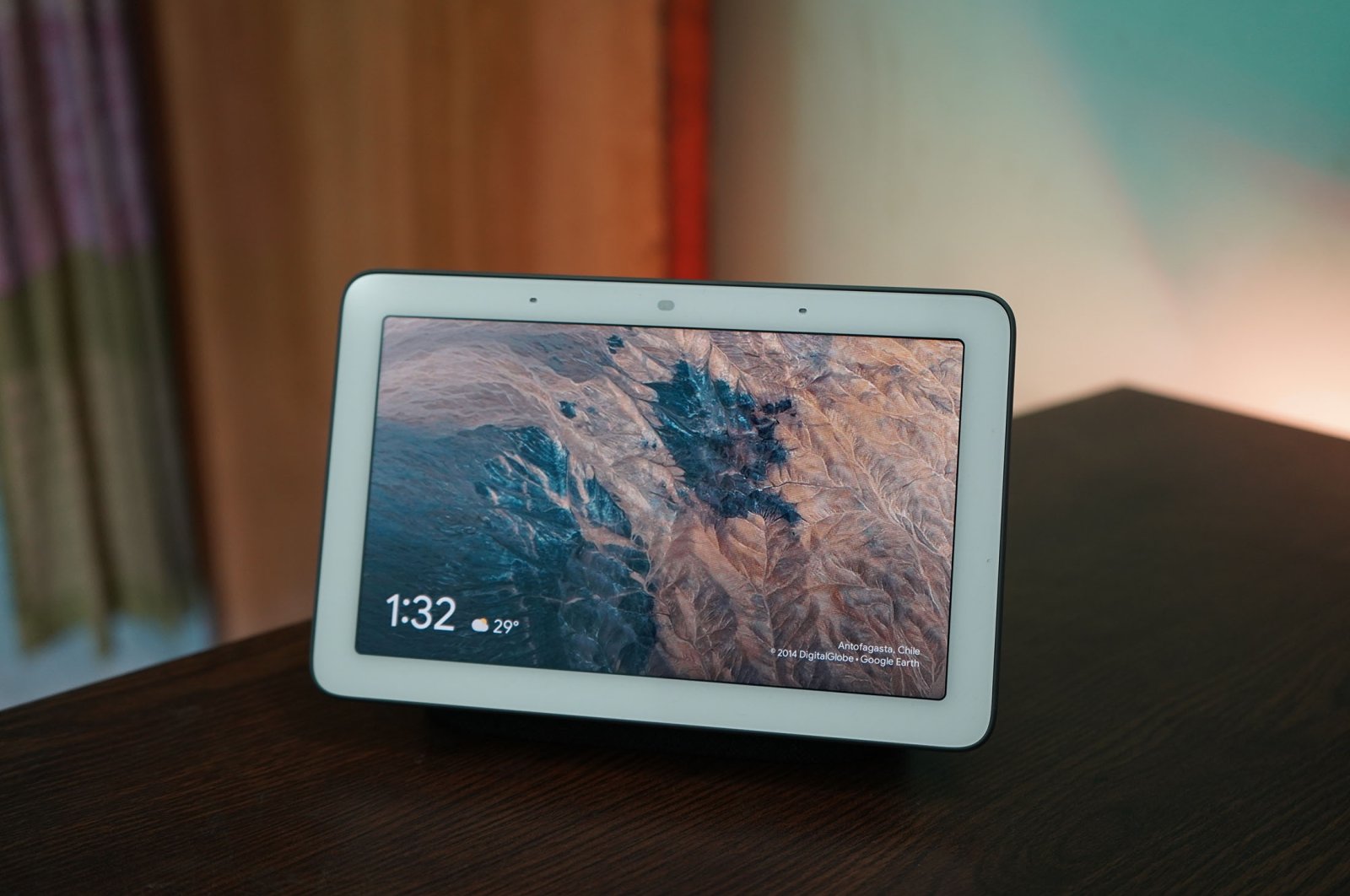 The Google Nest Hub is a Google Assistant smart device that can track your sleep. (Shutterstock Photo)
by Emre Başaran Mar 22, 2021 2:18 pm

As much convenience as these devices and their personalized algorithms bring, the two companies’ purported push toward a privacy-oriented approach still isn't enough to quell consumers' substantiated concerns

“They can’t be actively listening to millions of people; artificial intelligence (AI) must be cherry-picking some keywords to push personalized ads,” right? Microsoft’s confession may be bad news for you.

“We've long been clear that we collect voice data to improve voice-enabled services and that this data is sometimes reviewed by vendors. We've recently updated our privacy statement to add greater clarity that people sometimes review this data as part of the product improvement process,” a spokesperson of Microsoft told the press in 2019 after reports that not only AI but also flesh-and-blood humans were listening to what people were telling their Xbox consoles in voice commands.

“We always get customer permission before collecting voice data; we take steps to de-identify voice snippets being reviewed to protect people's privacy, and we require that handling of this data be held to the highest privacy standards in the law. At the same time, we're actively working on additional steps we can take to give customers more transparency and more control over how their data is used to improve products,” the official added.

These remarks were nothing more than stating the obvious. Big tech companies rely on user data; they have relied on our personal data since the dawn of the internet. These giants include Facebook, Microsoft, Amazon, Google, and despite its heavy emphasis on privacy, Apple. But this is just a part of capitalism: sell products to people who are willing to spend money for a device that listens, sees, reads many details about their lives for the sake of personalized ads pushed to their screens.

I am a massive geek myself, and I’ve never ever felt even a tiny bit of buyer’s remorse after spending my hard-earned cash on a new piece of shiny hardware, game disc or peripheral.

Buying a somewhat privacy-breaching device may make you feel uneasy, but you soon forget about it when the dopamine from unwrapping a new phone or a game console gets released in your brain.

Apart from their expensive price tags, the fact that the devices we carry in our pockets, hang on our walls, put on our nightstands or connect to our TVs are in a way our "Big Brothers" – maybe George Orwell was only fortune telling?

Using AI for good and bad

AI has come a long way. It is still not perfect and arguably it is still nonexistent in many triple-A games (where they are actually needed), especially ones developed by Ubisoft. Single-player, story-driven gaming – aka old-school gaming that does not rely on millions of real people controlling in-game characters – is where AI must shine. You have to be able to create some cunning enemies for the player to fight against, or you have to have a good understanding of modern football mechanics to make a proper football simulation – unlike Electronic Arts (EA), which only wants to sell virtual goods – aka card packs in FIFA series’ FUT mode – that require no expense to be produced and sell for millions of dollars in total.

Putting intelligent non-playable characters (NPCs) in video games, analyzing anonymized big data for scientific purposes, creating simulations that teach people how to fly a plane etc. can count as using AI for good, for the sake of humanity’s intellectual development. Tech can be used for good but also for bad.

Albert Einstein, arguably the most intelligent human being to have ever walked the earth, once told Newsweek about his sorrow that his famous equation E=mc2, which explains the energy released in an atomic bomb, indirectly contributed to the creation of the most destructive weapon ever created.

“Had I known that the Germans would not succeed in producing an atomic bomb, I never would have lifted a finger,” he told Newsweek in the interview.

As this historical example shows, tech can be used for good and for bad. On paper, it may not look so bad: There is a device that organizes your life, plans your meetings, sets your alarm, does as you say with a single voice command, without you ever lifting a finger.

But at what cost?

The spotlight is on the Nest Hub because of its sensor and its supposed ability to tell you how well you slept last night. Such gadgets and apps had access to our contact lists, photos, voice recordings, tastes in fashion, areas of interest, messages, business schedules, the places we’ve been to, to-do lists and now, our sleep routines.

According to the technical details, Google’s new gadget makes use of a "Soli" sensor, which has the capability to detect movement at a microscopic level. The company gathers data on your movements during your sleep, adds your sleep schedule and routines to the recipe and serves you an unpalatable dish under the guise of "valuable insights on your health."

Personally, the idea of having an intelligent device fully equipped with sensors, cameras and microphones sitting right next to my bed is horrifying, but then I remember our smartphones. Largely due to learned helplessness, smartphones have become a basic necessity in modern life. With that said, many consumers are likely to express discontent with another device spying on them.

Amazon’s latest Echo Show is a similar device and can also be set to track your sleep thanks to its Sleeptracker AI technology. A good night's sleep is key to a healthy life and technology is crucial in making our lives better, but how can one look past privacy scandals in the making?

We have observed countless privacy scandals in the last 10 years or so, most notably with Facebook becoming synonymous with such cases.

The Cambridge Analytica saga, which saw former U.S. President Donald Trump’s campaign misusing the Facebook data of tens of millions of people, reignited many people’s concerns on privacy and showed how far a privacy scandal could reach. Facebook's scandals are too long to list.

That aside, let's take a quick look at Google and Amazon, who are in a heated race for smart home assistants.

In May 2019, it was revealed that Amazon kept a transcript of people’s voice commands to their Alexa devices, and even gave them a false sense of privacy by letting them delete their voice recordings but secretly keeping transcripts intact at its servers.

Earlier in the same year, investigations revealed that the company employed thousands of people to listen to people’s conversations, just like Microsoft confessed in its Xbox listening incident. The Washington Post also previously reported that Google, like Amazon and Microsoft, hired people to literally wiretap people’s calls and voice recordings.

Trusting companies entangled in so many privacy issues as a consumer, especially when these gadgets can easily be manipulated with a hack, or a new software update to spy on people in their bedrooms, is tricky. What’s more, there is the not-so-conspiracy side of things, such as intelligence agencies’ possible violations of privacy.

In June 2013, the Guardian and The Washington Post revealed with leaked documents that big tech companies participated in the United States National Security Agency’s (NSA) PRISM surveillance program. According to the leaked documents, Microsoft participated in the program in 2007, Yahoo! in 2008, Google in 2009, Facebook in 2009, Paltalk in 2009, YouTube in 2010, AOL in 2011, Skype in 2011 and Apple in 2012.

"Ninty-eight percent of PRISM production is based on Yahoo, Google and Microsoft," The Washington Post said in the report. Here's what these tech giants said in response to these allegations.

"We provide customer data only when we receive a legally binding order or subpoena to do so, and never on a voluntary basis. In addition, we only ever comply with orders for requests about specific accounts or identifiers. If the government has a broader voluntary national security program to gather customer data, we don't participate in it," Microsoft said.

"We do not provide any government organization with direct access to Facebook servers. When Facebook is asked for data or information about specific individuals, we carefully scrutinize any such request for compliance with all applicable laws, and provide information only to the extent required by law," Mark Zuckerberg and Facebook said.

"Google cares deeply about the security of our users' data. We disclose user data to the government in accordance with the law, and we review all such requests carefully. From time to time, people allege that we have created a government 'back door' into our systems, but Google does not have a backdoor for the government to access private user data," added Google.

"Any suggestion that Google is disclosing information about our users' internet activity on such a scale is completely false," it stressed.

Albeit not as popular these days, Yahoo also tried to clarify things a little.

"Yahoo! takes users’ privacy very seriously. We do not provide the government with direct access to our servers, systems or network. Of the hundreds of millions of users we serve, an infinitesimal percentage will ever be the subject of a government data collection directive," it said in a statement.

And finally, the supposedly privacy-loving Apple, which has been criticized by consumers for weaponizing these privacy concerns for financial gain.

"We have never heard of PRISM," Apple said in its statement.

"We do not provide any government agency with direct access to our servers, and any government agency requesting customer data must get a court order," it added. It essentially lets consumers know that they would be sharing data if any governmental organization needed so for criminal proceedings, such as intercepting phone calls between members of terrorist groups.

Dry PR talk and empty promises by tech companies, coupled with their veiled pledge to not spy on you if you’re not a terrorist or a drug dealer, don't seem enough to reassure the public. Perhaps that's why people are finding it hard to invite another possibly privacy-breaching device into our bedrooms, despite all efforts to instill comfort in consumers.