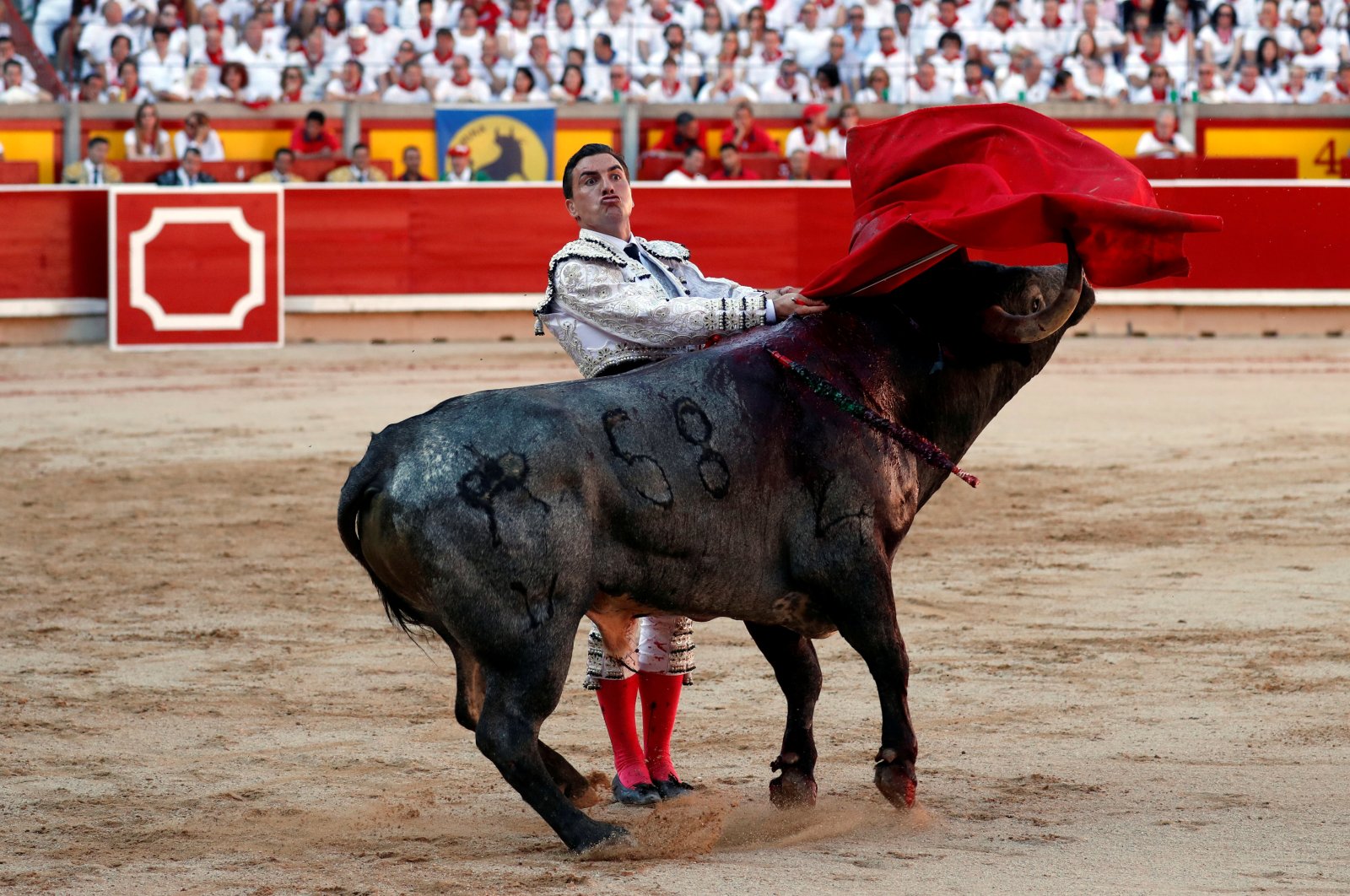 Spanish bullfighter Octavio Chacon performs a pass to a bull during the last bullfight of the San Fermin festival in Pamplona, Spain, July 14, 2019. (Reuters File Photo)
by reuters May 12, 2020 11:23 am
RECOMMENDED

Usually, at this time of year, Madrid's Las Ventas bullring is packed as matadors take on lethal half-ton bulls in daily fights during the annual San Isidro festival.

But plazas across Spain are empty this season as the coronavirus epidemic has kept matadors and fans alike stuck in their homes for weeks on end.

Major festivals such as San Isidro, Sevilla's April Fair, and Pamplona's San Fermin in July have been canceled, and bulls have been sent from ranches straight to the slaughterhouse.

The shutdown could deal a fatal blow to a controversial spectacle which poet Federico Garcia Lorca once called "the last serious thing."

Traditionally an emblematic part of Spanish culture, it has struggled for survival in recent decades.

Local governments have cut funding for fiestas, left-wing politicians oppose it, and a highly vocal anti-bullfight movement has grabbed headlines.

Although Spain has started to ease its coronavirus lockdown, it is not clear if any corridas will now take place before the end of the season in October.

"The worst-case scenario for us would be not to have bullfights in the whole year. That would be dramatic," bull breeder Victorino Martin told Reuters.

"Just imagine. We already haven't had any income because of the winter stoppage; imagine one more year like this."

The industry also supports thousands of jobs, from the matadors and their teams to ranch-hands and bullring staff. They are also under threat now.

For anti-bullfight activists, the corrida's plight is to be welcomed.

"It has been good news, one of the few good news brought by this pandemic," said Aida Gascon of AnimaNaturalis.

"Not only because of all the bulls that are not going to be tortured to death – although we know they are going to die anyway as they will be sent to the slaughterhouse. Nobody is going to benefit from that torture show."

Activists have staged regular demonstrations outside plazas – sometimes even daubing themselves with fake blood and lying down naked on the ground. For them, it is a cruel and bloody spectacle which has no place in modern Spain.

The Union of Breeders estimates the industry's losses could exceed 77 million euros ($83.32 million) if the season is written off.

Ranchers have already shipped hundreds of bulls to the slaughterhouses, where they fetch about 500 euros each as butcher's meat. The cost of raising a fighting bull is about 5,000 euros, which is only viable if the events take place.

"Four or five thousand fighting bulls will go to the slaughterhouse this year without being fought and without giving us the revenue for which the brave bull is raised," said Andres Romero, a rejoneador who fights the bulls mounted on a highly trained horse.

Supporters consider the bullfight an art form, not a sport.

The bulls are specially bred for the corrida, raised on ranches in the countryside before being shipped to the ring at the age of 4 or 5. Their death at the hands of the matador is the climax of the ritual – only rarely is one spared.

"We devote all possible resources to the animals since they are born until they die so they subsist and have a good life," Romero said.