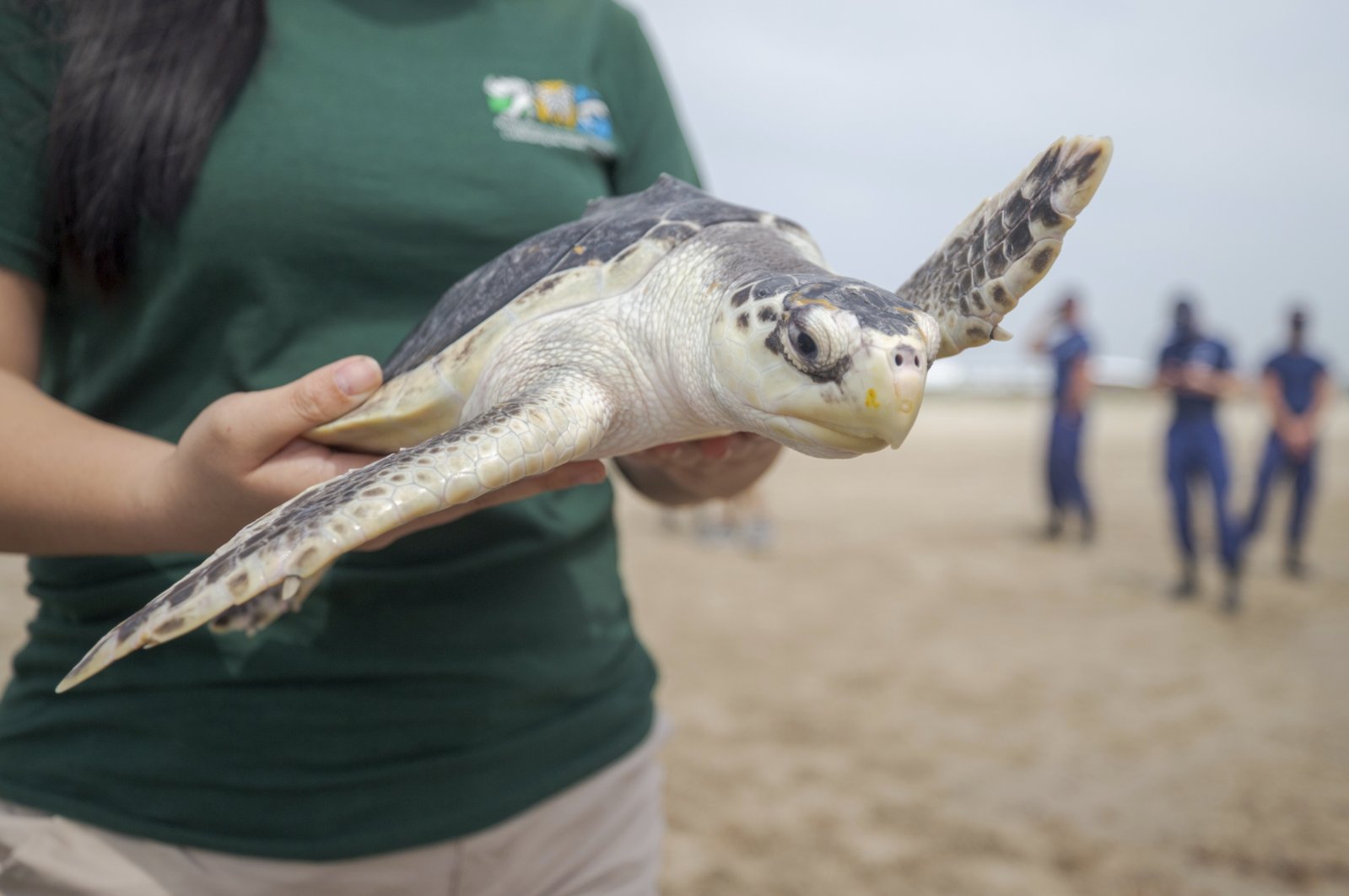 A volunteer holds a Kemp’s Ridley sea turtle before releasing it into the Gulf of Mexico from the Grand Isle beach, Louisiana, U.S., March 15, 2021. (The Advocate via AP)
by Associated Press Mar 26, 2021 1:44 pm
RECOMMENDED

Last month's deadly winter freeze in the United States state of Texas was an unprecedented event for people and animals alike, and the cold hit the sea turtles inhabiting the Texan coast particularly hard, killing many and prompting massive rescue efforts. About a third of the cold-stunned sea turtles survived and have now been released back into nature.

Of the approximately 13,000 sea turtles found, about 4,300 have been rehabilitated and released, according to the Sea Turtle Stranding and Salvage Network, a cooperative of federal, state and private partners coordinated by the National Oceanic and Atmospheric Administration (NOAA).

This was the largest cold-stunning event for sea turtles recorded in the U.S. since the network was established in 1980.

While the majority of the sea turtles found during the winter storm were already dead, those that survived would not have if not for the rescue efforts by experts and volunteers who were themselves struggling without power at home, said Barbara Schroeder, NOAA’s national sea turtle coordinator.

She said the water and air temperatures were "too cold for too long” for them to recover on their own. "The event was so severe, the temperatures were so extreme, yes, they absolutely would have all died,” said Schroeder, who added that a small number are still being cared for.

As below-freezing temperatures hit the coast during the February storm, scientists, volunteers and even the U.S. Coast Guard joined efforts to rescue the immobile sea turtles from the water and shore.

"Mind you, while they’re bringing and rescuing all of these sea turtles, we didn’t have power or water, our gas stations ran out of gas,” said Wendy Knight, executive director at Sea Turtle Inc., a nonprofit on South Padre Island.

Her group took in so many sea turtles, over 5,300, that they had to start placing them in the South Padre Island Convention Center.

Ed Caum, executive director of the South Padre Island Convention and Visitors Bureau, said that for a while during the week of the storm a vehicle pulled up "every 15 minutes or less” and dropped off turtles.

Some of the cold-stunned sea turtles had other problems as well, including hook infections and injuries from boats, Knight said. Almost all of the rescued sea turtles were green turtles, Schroeder noted.

Once rescued, the turtles were slowly warmed up. "You can’t warm them up really, really quickly. And some of the turtles that came in alive did not make it,” said Christopher Marshall, director of the Gulf Center for Sea Turtle Research, which rescued sea turtles in the Galveston area.

He said that once the turtles they rescued were revived, they were taken to the Houston Zoo for a check-up and if they then passed a swim test, they were returned to the Gulf.

Knight said they have held a volunteer appreciation day and made T-shirts for those who helped rescue the turtles that say: "I survived the great cold stun.”

"There were hundreds, maybe even thousands, I couldn’t even guess at how many people we had involved,” Knight said.