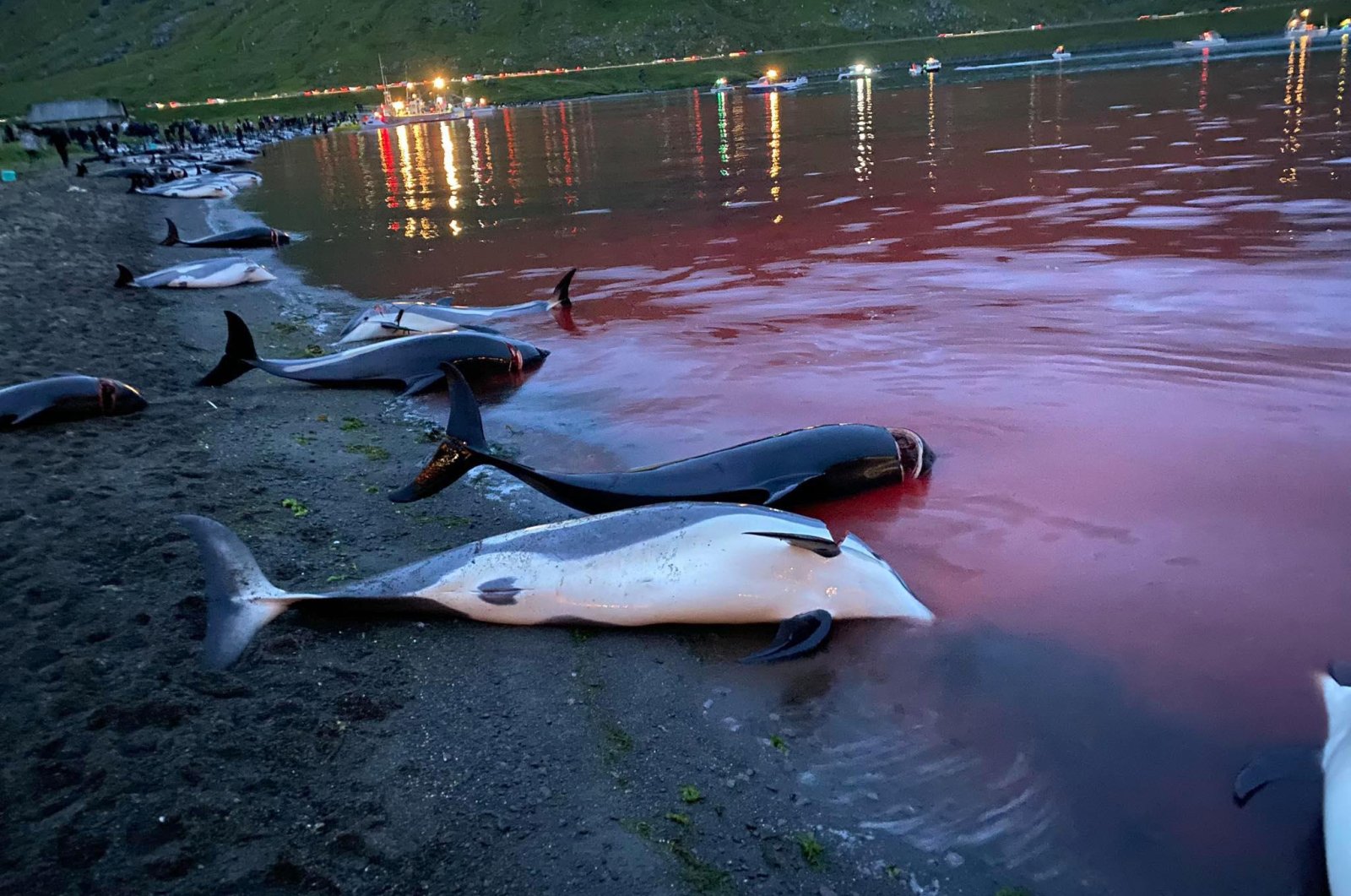 In this image released by Sea Shepherd Conservation Society, the carcasses of dead white-sided dolphins lay on a beach after being pulled from the blood-stained water on the island of Eysturoy, which is part of the Faeroe Islands, Sept. 12, 2021. (Sea Shepherd via AP)
by ASSOCIATED PRESS Sep 16, 2021 2:58 pm
RECOMMENDED

Sea Shepherd, the international animal rights group, called on Faeroes on Wednesday to end the slaughtering of dolphins, adding it hopes that pressure will build from within the islands to end its traditional drive of sea mammals into shallow water, where they are slaughtered for their meat and blubber.

A local activist published gruesome video footage of Sunday’s slaughter of 1,428 white-sided dolphins on the central Faeroese island of Eysturoy in the North Atlantic archipelago. The number of dolphins was so large – much higher than in previous years – that it appears participants may not have been able to follow regulations to minimize the suffering of the mammals.

“It was a complete disaster, completely unprecedented in fact, it could even be the largest single hunt of cetaceans in documented history anywhere in the world,” said Robert Read, campaign director for the Sea Shepherd Conservation Society.

Environmental activists have long claimed the practice is cruel. But this year even people on the Faeroes who defend the four-century-old practice have spoken out amid fears that this year’s slaughter will draw unwanted attention.

“We must admit that things did not go as we would like to,” said Hans Jacob Hermansen, the former chairperson of the Faeroese association behind the drives. “We are going to evaluate if anything went wrong, what went wrong and why, and what can we do to avoid that in the future.”

Sea Shepherd says it is hoping for “much tighter restrictions” around such hunts and, if not, “at least a ban on the killing of the Atlantic white-sided dolphins.”

Faeroese hunters are used to criticism from animal rights groups and push back at what they see as interference in cultural practice.

Each year, islanders drive herds of the mammals – chiefly pilot whales – into shallow waters, where they are stabbed to death. A blow-hole hook is used to secure the beached whales and their spine and main artery leading to the brain are severed with knives, turning water in the bay red with blood. The drives are regulated by law and the meat and blubber are shared on a community basis.

“The killing of pilot whales is not very much different from killing cattle or anything else. It’s just that we have an open abattoir,” Hermansen told The Associated Press (AP). “Everyone can see it ... but if a cow also doesn’t die immediately, you don’t stop killing cattle.”

The white-side dolphins and pilot whales are not endangered species.

But Read said Sunday’s slaughter was “completely indiscriminate. The entire pod is killed and pregnant mothers, calves, everything.” He added that residents used “power boats and jet skis to chase dolphins and pilot whales for hours on end, they really have no chance of escape.”

Fisheries Minister Jacob Vestergaard said everything this year was done by the book in the dolphin hunt. The Faeroes – 18 rocky islands located halfway between Scotland and Iceland – are semi-independent and part of the Danish realm.