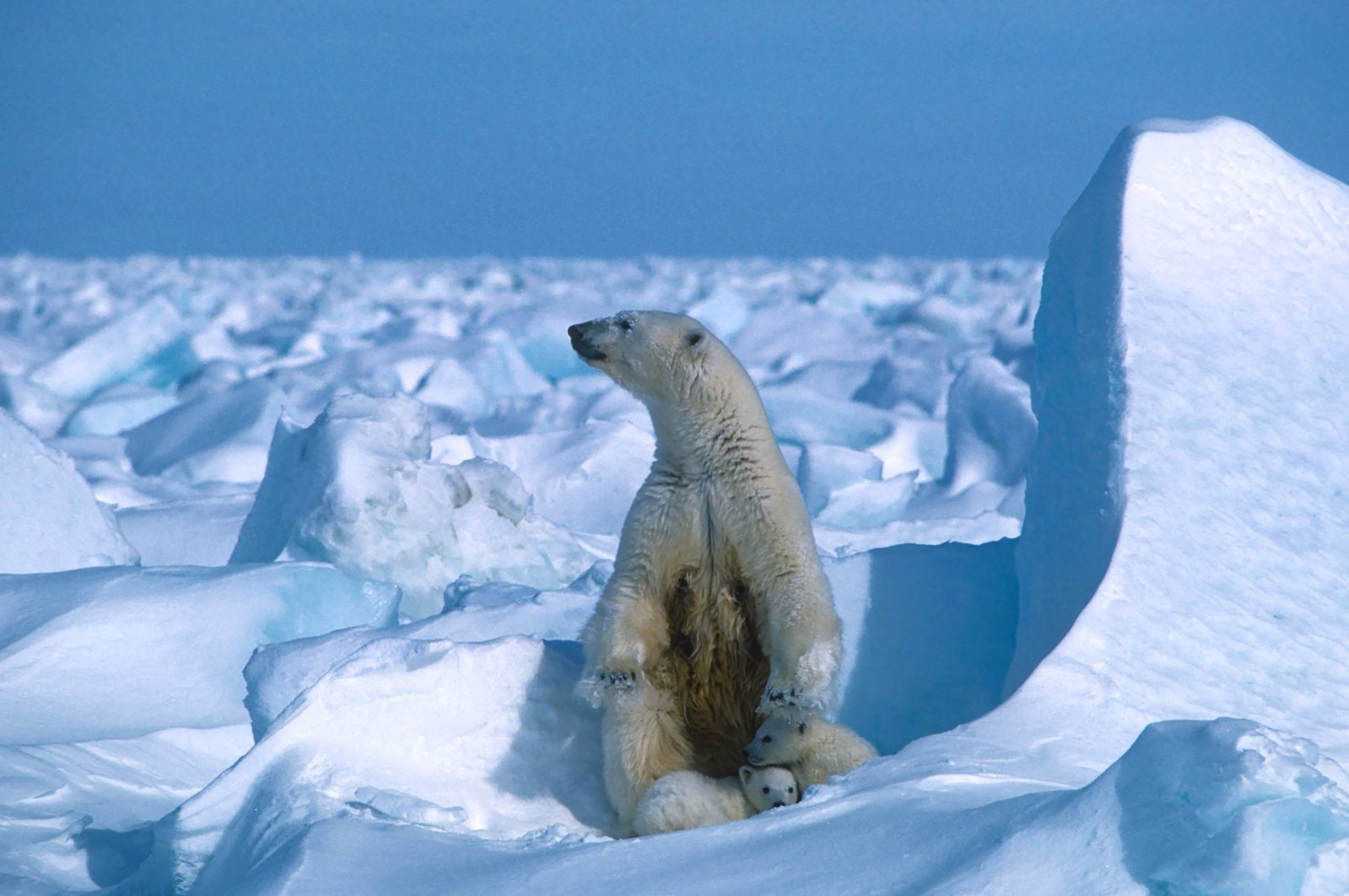 A polar bear with its cubs sits in the sea ice, northeast of Prudhoe Bay in Alaska, U.S., in 1985, in this file handout photo made available on July 17, 2020. (Photo by Steven C. Amstrup/Polar Bears International via AFP)
by French Press Agency - AFP Sep 22, 2020 10:50 am
Edited By Yasemin Nicola Sakay
RECOMMENDED

Until this month, only once in the last 42 years has Earth's frozen skull cap covered less than 4 million square kilometers (1.5 million square miles).

The trend line is clear: The extent of sea ice has diminished 14% per decade over that period. The Arctic could see its first ice-free summer as early as 2035, researchers reported in the Nature Climate Change journal last month.

But all that melting ice and snow does not directly boost sea levels any more than melted ice cubes make a glass of water overflow, which gives rise to an awkward question: Who cares?

Granted, this would be bad news for polar bears, which are already on a glide path toward extinction, according to a recent study.

And yes, it would certainly mean a profound shift in the region's marine ecosystems, from phytoplankton to whales.

But if our bottom-line concern is the impact on humanity, one might legitimately ask, "So what?"

As it turns out, there are several reasons to be worried about the knock-on consequences of dwindling Arctic sea ice.

Perhaps the most basic point to make, scientists say, is that a shrinking ice cap is not just a symptom of global warming but a driver as well.

Freshly fallen snow reflects 80% of the Sun's radiative force back into space. But when that mirror-like surface is replaced by deep blue water, about the same percentage of Earth-heating energy is absorbed instead.

And we're not talking about a postage stamp area here: The difference between the average ice cap minimum from 1979 to 1990 and the low point reported today – more than 3 million square kilometers – is twice the size of France, Germany and Spain combined.

The oceans have already soaked up 90% of the excess heat generated by manmade greenhouse gases but at a terrible cost, including altered chemistry, massive marine heat waves and dying coral reefs. And at some point, scientists warn, that liquid heat sponge may simply become saturated.

Earth's complex climate system includes interlocking ocean currents driven by wind, tides and something called the thermohaline circulation, which is itself powered by changes in temperature ("thermo") and salt concentration ("haline").

Even small changes in this Great Ocean Conveyor Belt, which moves between poles and across all three major oceans, can have devastating climate impacts.

Nearly 13,000 years ago, for example, as Earth was transitioning out of an ice age into the interglacial period that allowed our species to thrive, global temperatures abruptly plunged several degrees Celsius. They jumped back up again about 1,000 years later.

Geological evidence suggests a slowdown in the thermohaline circulation caused by a massive and rapid influx of cold freshwater from the Artic region was partly to blame.

"The freshwater from melting sea ice and grounded ice in Greenland perturbs and weakens the Gulf Stream," part of the conveyor belt flowing in the Atlantic, said Xavier Fettweis, a research associate at the University of Liege in Belgium.

"This is what allows western Europe to have a temperate climate compared to the same latitude in North America," he said.

The massive ice sheet atop Greenland's landmass saw a net loss of more than half-a-trillion tons last year, all of it flowing into the sea. Unlike sea ice, which does not increase sea levels when it melts, runoff from Greenland does.

That record amount was due in part to warmer air temperatures, which have risen twice as fast in the Arctic as for the planet as a whole. But it was also caused by a change in weather patterns, notably an increase in sunny summer days.

"Some studies suggest that this increase in anticyclonic conditions in the Arctic in summer results in part from the minimum sea ice extent," Fettweis told AFP.

The current trajectory of climate change and the advent of ice-free summers – defined by the U.N.'s IPCC climate science panel as under 1 million square kilometers – would indeed starve polar bears into extinction by the century's end, according to a July study in the journal Nature.

"Human-caused global warming means that polar bears have less and less sea ice to hunt on in the summer months," Steven Amstrup, lead author of the study and chief scientist of Polar Bears International, told AFP.

"The ultimate trajectory of polar bears with unabated greenhouse gas emissions is disappearance," he said.