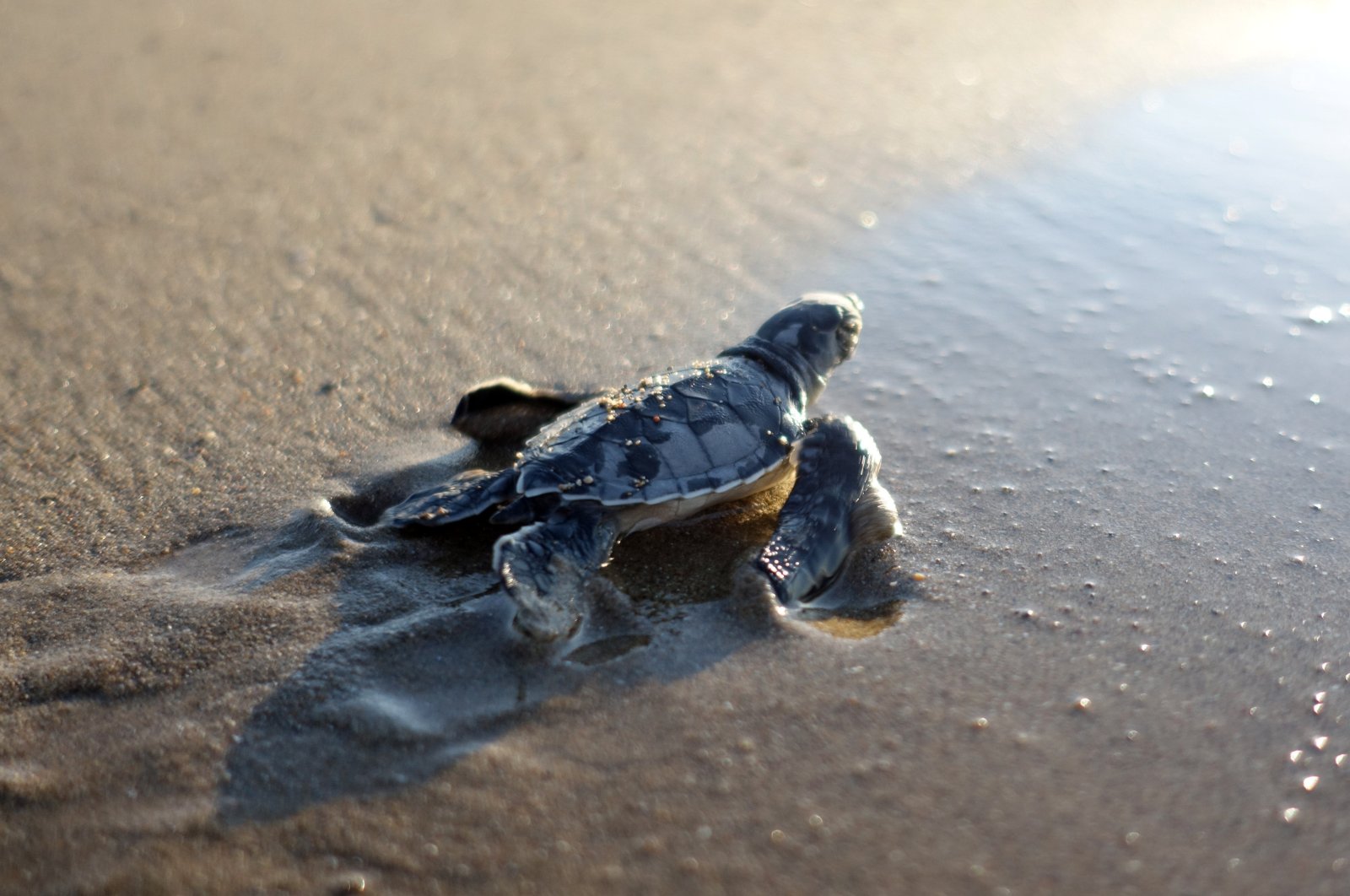 A loggerhead sea turtle is seen crawling toward the Mediterranean Sea at a beach in Antalya, southern Turkey on Nov. 19, 2020. (DHA Photo)
by DAILY SABAH Dec 10, 2020 1:40 pm
RECOMMENDED

Crucially important sea turtle nesting beaches along the Mediterranean are inadequately protected and continue to endanger progress made for the conservation of their habitats, the Bern Convention said Wednesday.

The 40th Standing Committee Meeting of the Bern Convention, a binding international legal instrument operating in the field of natural habitat and wildlife conservation, made the statement after evaluating complaints and concerns regarding sea turtle habitats in Turkey, Greece and the island of Cyprus, and ruled they were justified.

The issue was first raised by the Mediterranean Association to Save the Sea Turtles (MEDASSET), an international nongovernmental organization (NGO) and a permanent observer-member to the convention, saying the habitats of the sea turtles, and in particular, the beaches of Laganas Bay (Zakynthos) and Southern Kyparissia Bay (Peloponnese) in Greece; Fethiye, Patara and Anamur in Turkey, and Akamas and Limni in Cyprus were inadequate.

The NGO said that Greek officials had continuously failed to implement recommendations for Laganas Bay in Zakynthos, the top Mediterranean loggerhead (Caretta caretta) nesting site in the country, and despite being designated a National Marine Park since 1999, illegal businesses continued to operate in the area and unregulated maritime activity had reached new highs.

MEDASSET brought its complaints about the Greek bay before the Bern Convention as a case in 1984. A recommendation was adopted three years later and the case file had remained closed for 21 years. However, the convention decided to reopen the case after repetitive violations, as it did with Kyparissia Bay.

Meanwhile, on the island of Cyprus, the Akamas peninsula and Limni Beach still have no effective protection measures in place on nesting beaches for both loggerhead and green turtles, it said.

The situation in Turkey isn't bright either. Light pollution, the access of vehicles on beaches and insufficient nest monitoring seem to be the most pressing conservation problems.

MEDASSET found that Fethiye and Patara lacked important measures for the conservation of sea turtles and that their habitats faced serious problems.

In Anamur, home of the second-most important nesting rookery in Turkey, MEDASSET and local group MERCED reported severe destruction caused by nearby construction projects. They had also submitted a complaint regarding the construction of a picnic area by the local municipality back in 2019, for which the government had issued heavy fines and demanded the restoration of the beach that same year. Restoration has yet to take place.

The case files of Patara and Fethiye will also remain open, while the Anamur case will be reevaluated in the next meetings.

The Bern Convention Standing Committee has expressed deep concern and urged the authorities to halt any current or future development works and elaborate a Special Protected Area Management Plan for Anamur.

Turkey hosts 21 loggerhead nesting grounds in several cities, from Muğla in the southwest to Antalya, Mersin, Adana and Hatay in the south.

In the last three decades, Turkey has upped its efforts to protect sea turtles, the most recent one being fitting them with microchips to monitor their journeys and the dangers they encounter. Sea and beach cleaning initiatives have also helped increase the number of nests to 8,000 from 1,500.