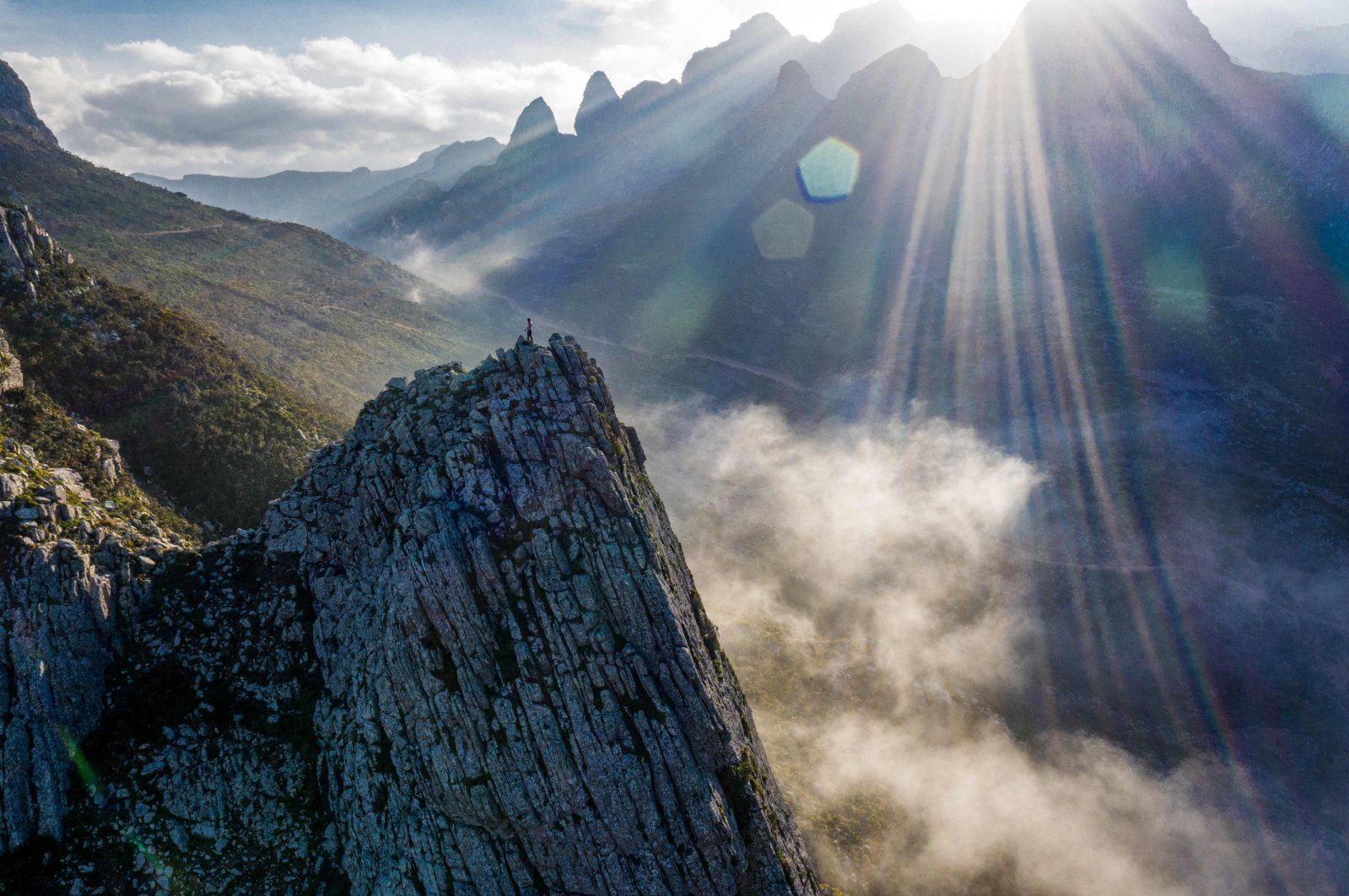 An aerial view of Di-Hamri mountain shows a man atop a peak, in the Island of Socotra, a site of global importance for biodiversity conservation, located in the northwestern Indian Ocean, Yemen, Feb. 15, 2021. (AFP Photo)
by French Press Agency - AFP Apr 09, 2021 5:31 pm
RECOMMENDED

A study published on Friday, by experts scientists in their fields, revealed that the effects of climate change and global warming were threatening the Earth's most valuable and richest habitats, home to innumerable animal and plant life. These habitats will cease to exist unless humanity adheres to the 2015 Paris climate treaty and radically changed its carbon emissions.

An analysis of 8,000 published risk assessments for species showed a high danger for extinction in nearly 300 biodiversity "hot spots," on land and in the sea, if temperatures rise 3 degrees Celsius (37.4 degrees Fahrenheit) above preindustrial levels, they reported in the journal Biological Conservation.

Earth's surface has heated up 1 degree Celcius so far, and the Paris Agreement enjoins nations to cap warming at "well below" 2 degrees Celcius and 1.5 degrees Celcius if possible.

National commitments to slash greenhouse gas emissions, assuming they are honored, would still see temperatures soar well above 3 degrees Celcius by century's end, if not sooner. So-called endemic species, plants and animals found exclusively in a specific area, will be hit hardest in a warming world.

From snow leopards in the Himalayas and the vaquita porpoise in the Gulf of California to lemurs in Madagascar and forest elephants in central Africa, many of the planet's most cherished creatures will wind up on a path to extinction unless humanity stops loading the atmosphere with CO2 and methane, the study found.

Endemic land species in biodiverse hot spots are nearly three times as likely to suffer losses due to climate change than more widespread flora and fauna, and 10 times more likely than invasive species.

"Climate change threatens areas overflowing with species that cannot be found anywhere else in the world," said lead author Stella Manes, a researcher at the Federal University of Rio de Janeiro. "The risk for such species to be lost forever increases more than 10-fold if we miss the goals of the Paris Agreement."

More and more scientists concede that capping global warming at 1.5 degrees Celcius target is probably out of reach. However, every tenth of a degree matters when it comes to avoiding impacts, they say.

Some concentrations of wildlife are more vulnerable than others. In mountain regions, 84% of endemic animals and plants face extinction in a 3 degrees Celcius world, while on islands, already devastated by invasive species, the figure rises to 100%.

"By nature, these species cannot easily move to more favorable environments," explained co-author Mark Costello, a marine ecologist from the University of Aukland. Marine species in the Mediterranean are especially threatened because they are trapped in an enclosed sea, he added.

Overall, more than 90% of land-based endemic species, and 95% of marine ones, will be adversely affected if Earth warms another two degrees, the international team of researchers found.

In the tropics, two out of three species could perish due to climate change alone. The findings may impel conservationists to rethink how to best protect endangered wildlife.

Up to now, the main threats have been habitat loss due to expanding urban areas, mining and agriculture, on the one hand, and hunting for food and body parts to sell on the black market, on the other.

A key strategy in the face of this onslaught has been carving out protected areas, especially around biodiversity hot spots. However, these safe havens may be of little use in the face of global warming.

"Unfortunately, our study shows that those biodiversity rich-spots will not be able to act as species refugia from climate change," said co-author Mariana Vale, also from Federal University.

Even before the impact of global warming has truly kicked in, scientists have ascertained that Earth is at the outset of a so-called mass extinction event in which species are disappearing at 100 to 1,000 the normal, or "background," rate.

There have been five previous mass extinctions in the last 500 million years.