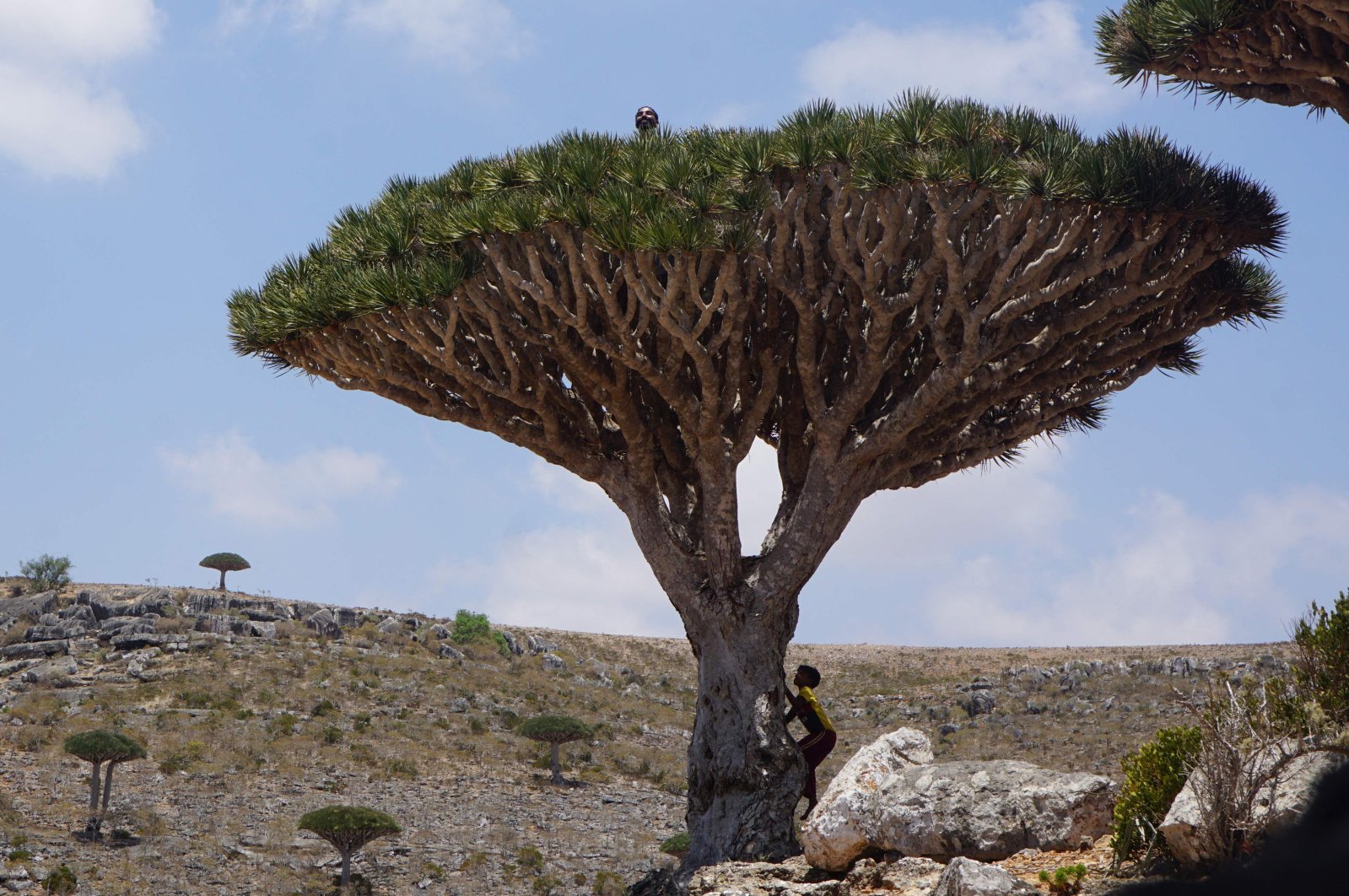 An environmental crisis is looming on Yemen's island of Socotra, the main part of the eponymous archipelago in the Indian Ocean known for its remarkable biodiversity.

Forests of these ancient trees are being decimated by increasingly intense storms, while replacement saplings are gobbled by proliferating goat herds, leaving the fragile biological hotspot vulnerable to desertification.

"The trees bring water, so they are so important," said Adnan Ahmed, a mathematics teacher and tour guide whose passion is Socotra's famous flora and fauna.

"Without trees, we will be in trouble."

Lying in turquoise seas between Arabia and Africa some 350 kilometers (215 miles) south of Yemen's coast, Socotra is home to over 50,000 people and has remained relatively untouched by the bloodletting of the civil war raging on the mainland.

Naming it a World Heritage site in 2008, UNESCO described the main island as one of the world's "most biodiversity rich and distinct." It has also been dubbed the "Galapagos of the Indian Ocean."

Ahmed said islanders traditionally don't fell dragon's blood trees for firewood, both because they perpetuate regular rainfall and because its blood-red sap is medicinal.

But scientists and islanders warn that the trees will largely die out within decades, buckling under pressure from global warming driving cyclones, as well as invasive species and overgrazing.

"Goats eat the seedlings, so young trees are only found on cliff faces in the most inaccessible places," said Ahmed.

The trees take nearly half a century before they reproduce, he explained. "If nothing is done, it will not take long before all are gone," he said.

'Running out of time'

The shrinking forests are a canary in the mine for Socotra's environmental challenges, said Belgian biologist Kay Van Damme, from the University of Ghent.

"It remains a treasure trove of biodiversity," said Van Damme, chair of the Friends of Socotra support group. "But we may soon be running out of time to protect Socotra's most iconic flagship species."

Each lost tree drives a reduction in the hydrological cycle on which all life depends.

Islanders say trees have been battered by storms more ferocious than anyone remembers.

At Diksam, on the high plateau surrounding the Hagher mountains, running like a spine along the 130-kilometer island and 1,500 meters (4,900 feet) high, dead trees lie scattered like bowling ball pins.

Other local species are just as hard hit by storms and overgrazing, including the 10 endemic species of the frankincense tree.

Gales have torn through nearly a third of the trees in the Homhil forest over the past decade.

Without replanting efforts, the forest "will be gone in only a few decades," Van Damme said.

One study found the number of frankincense trees had plummeted by 78% in this area between 1956 and 2017.

"The immune system of Socotra is now compromised," he said, but added, "there is still hope."

"If the trend continues, future generations might be able to visit a Socotran frankincense tree only in a botanical garden, accompanied by a little plaque saying 'extinct in the wild,'" Van Damme added.

The International Union for Conservation of Nature (IUCN) warns that Socotra is under "high threat," and the "deteriorating" situation will be "accelerated by climate change."

Islanders are already feeling the impact of changing weather patterns.

Abdullah Ahmed, from a small fishing village near Shuab, a cluster of solidly built coral-stone homes, said the 40 residents were threatened both by extreme high seas and landslides.

They have built a new village 10 minutes' walk from the sea.

"Waves in the last storms smashed the windows of our home," the 25-year-old said, describing how his family had sheltered terrified in caves for days.

"The last monsoon was worse than anyone had experienced."

'We have a chance'

But with effort, the worst impact can be slowed – and some Socotris are doing what they can to protect their island.

Inside are dozens of knee-high saplings. Resembling pineapple plants, they are the painstaking result of at least 15 years' growth.

Sadia Eissa Suliman was born and raised at the Detwah lagoon, listed as a wetland of global importance under the Ramsar wetlands convention.

"I saw how the lagoon was changing," said the 61-year old grandmother, who watched swathes of trees being chopped down, plastic being dumped and fishing nets trawling the water, a critical nursery for young fish.

"Everyone said someone else would do something," she said. "But I said, 'Enough: I will do it, and people will see the difference.'"

She now helps the community enforce a fishing ban and raises funds to enclose trees and tackle littering.

Scientists are also determined Socotra will not just become another case study of loss.

"We have a chance as humans to not mess this one up, otherwise we've learned nothing from other examples of huge extinctions on islands," Van Damme said.

"Socotra is the only island in the entire world where no reptile, plant or bird that we know of has gone extinct in the last 100 years. We have to make sure it stays that way."