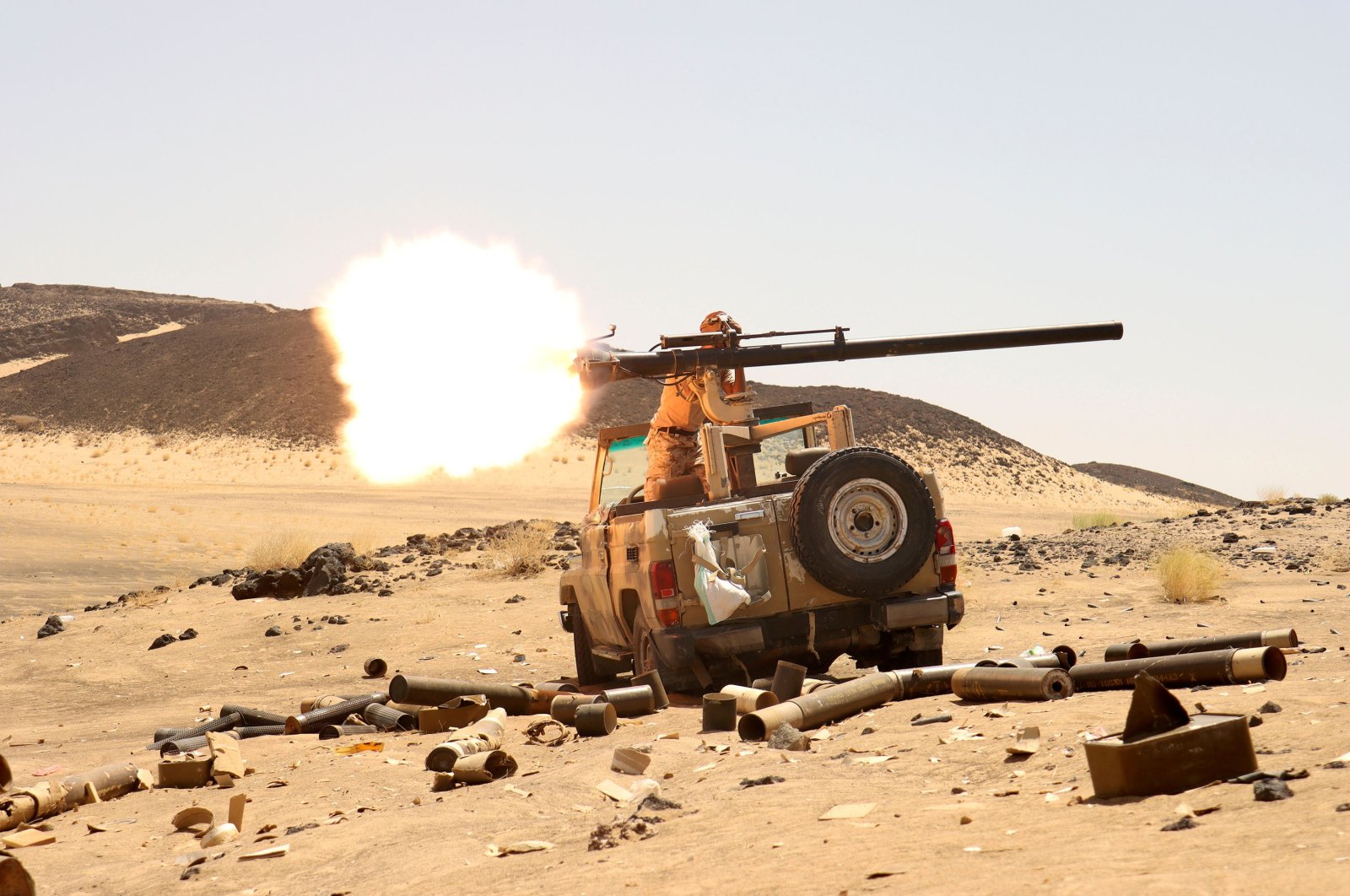 A Yemeni government fighter fires a vehicle-mounted weapon at a frontline position during fighting against Houthi fighters in Marib, Yemen, March 9, 2021. (Reuters Photo)
by Muhittin Ataman
Jun 09, 2021 12:05 am

Yemeni civilians suffer the most from the conflicts of interest between Saudi Arabia and Iran. The crisis, both political and military in nature, has affected the entire Middle East region for years

Turkish and Yemeni scholars and bureaucrats discussed different dimensions of the Yemeni crisis. The speeches were broadcasted in Turkish, English and Arabic on YouTube.

The speakers raised concerns about the global indifference toward the Yemeni crisis and called on the world to struggle to end the enduring humanitarian problem.

Conflicting interests and perspectives between different domestic political actors are not the only reason for the world's biggest humanitarian crisis, the diverging interests between three regional powers, namely Suadi Arabia, Iran and United Arab Emirates (UAE), also play a role.

In other words, the Yemeni crisis is not just a domestic problem, it is also a regional proxy war between regional powers.

Neither intervening regional powers nor international organizations succeeded in ending the crisis. Regional powers prioritize their national interests, not the benefit of the Yemeni people.

Therefore, none of these regional powers play a constructive role in ending the conflict.

Riyadh, Tehran and Abu Dhabi do not want a final resolution of the crisis in a way that would provide an atmosphere of peace and tranquility, allowing for the independence of the Yemeni people.

They totally ignore the humanitarian dimension of the crisis and invest only in the military sector. They use all means and financial resources to recruit more mercenaries to fight for them.

Saudi Arabia intervened in the Yemeni crisis for several reasons. First of all, the kingdom is influenced directly by the chaos and turmoil in Yemen, Saudi Arabia’s neighbor with which it shares the longest borders.

Saudis intervened in the crisis to protect its national as well as transit and navigation security.

The second reason the Saudis intervened was to balance the Iranian influence in the country. Both countries have been competing for regional hegemony for decades.

In order to achieve its target, the Saudi forces did not and still do not hesitate to bomb civilian areas, killing thousands of innocent people and commit war crimes.

The third reason for the Saudi intervention is the personal calculation of former Saudi defense minister, Crown Prince Mohammad bin Salman (MBS), who tried to use the intervention in Yemen to catapult his personal career.

MBS planned not only to save his country from a "vital threat" but also to become the main actor in the Saudi state structure.

Although he has succeeded in becoming the main actor in his country, he has suffered a serious failure in Yemen. The intervention in Yemen has seen serious opposition for him and his administration. He has faced criticism from both inside and outside the country.

Another reason is Saudi Arabia's expansionist dreams as it seeks to consolidate its regional dominance.

Since its independence, as the largest and most powerful state in the Arabian Peninsula, Saudi Arabia historically pursues an expansionist policy toward the north of Yemen.

Many observers perceive the Saudi intervention as a step to fulfill this historical objective.

Saudi Arabia has failed to achieve key objectives in Yemen. It failed to take back the Yemeni capital Sanaa from the Iranian-backed Houthis.

On the contrary, the Saudis could not prevent the Houthis from bombing Saudi cities, including Riyadh. The Saudi intervention, in the meantime, ruined the political, economic and social life in Yemen.

When we look at the main reasons for the Iranian intervention, we see that the Iranian regime has been trying to export its revolution to Yemen, since one-third of the Yemeni population are Shiite Zaydis.

In other words, Iran has the potential to find support from the inside. With the establishment of the Ansarullah organization in the early 1990s, Iran began to directly involve itself in Yemeni politics.

The Yemeni crisis provided a convenient backdrop for Iran to provide military support to the Houthis and intervene in the crisis.

Second, the Yemeni front occupies a significant place for the fulfillment of the regional Iranian project, the establishment of the Shiite Crescent.

Sanaa has become the fourth Arab capital to come under Iranian influence. The Iranian-backed Houthis control the largest part of the country.

Third, Iran has been trying to contain Saudi Arabia. The intervention into the Yemeni crisis through the Houthis strengthened Iran's hand.

Is Tehran more influential in Yemen?

Today, Iran is more influential in Yemen than Saudi Arabia. The Iranian-backed Houthis created a huge cost for Riyadh both in military and political terms.

The Saudi regime’s assertive intervention has ended with a significant defeat. Among all others, the Saudi state never experienced such attacks against its territories throughout its history. Most Saudi cities were targeted and hit by the Houthis.

A cease-fire under the current conditions will surely not be in favor of Saudi Arabia, deprived of former U.S. President Donald Trump's support.

That is, the Biden administration is much more critical to the Saudi and the Iranian regimes for their atrocities in Yemen.

The new U.S. approach has pushed the two countries to get closer and start resolving their longstanding disputes.

Therefore, the Saudi regime was compelled to start a diplomatic dialogue with Iran. The Saudi officials met with Iranian officials in Iraq under the auspices of the Iraqi Prime Minister Mustafa al-Kadhimi to discuss the future of the Yemeni crisis.

It seems that the two countries will continue their dialogue as long as they are otherized by the U.S.